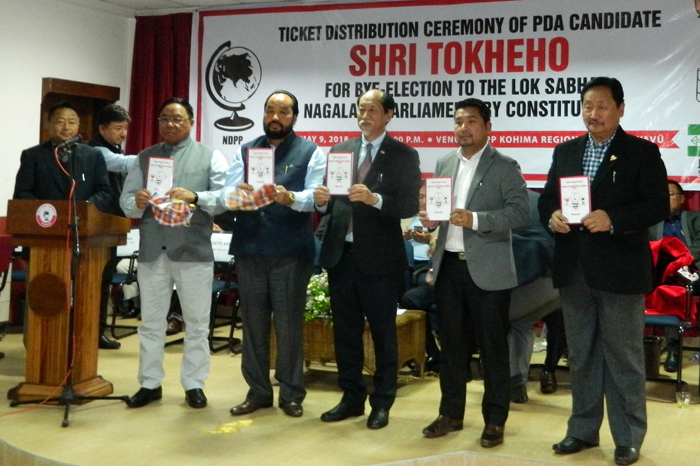 Chief Minister Rio with NDPP candidate for LS bye-poll Tokheho and others of PDA pose for lens at Kohima Region NDPP office on May 9, 2018.

Kohima, May 9: The ruling People’s Democratic Alliance (PDA) today officially handed over the NDPP ticket to former minister Tokheho Yepthomi while opposition Naga People’s Front (NPF) gave it to former Rajya Sabha MP and ex-MLA, C Apok Jamir for the May 28 Lok Sabha bye-election.
The official declaration and formal handing over of the party tickets to both the candidates were held at the respective offices in Kohima. NDPP held the ticket distribution programme at its Kohima region office while NPF did it at its Central Headquarter here. Both the candidates will file their nomination on Thursday, the last date of filing nomination for the bye-election.
Speaking on the occasion, Chief Minister Neiphiu Rio said that being in the government, the PDA consensus candidate has the advantage of winning the polls but he called upon all alliance partners not to be complacent as the opposition though not strong has 26 elected members, which is a good number.
He also acknowledged the younger brothers of PDA for accepting the NDPP nominee as the consensus candidate even as there were some initial grudges and request for setting up independent candidate. “Our adversaries have been criticizing NDPP saying that it is only registered but not a recognized party and that we won’t get ECI recognition till 2023. But NDPP is now a fully recognized party following the February 27 election result,” he said, while also affirming that NDPP is running a stable PDA government.
Rio asserted that going to Delhi, Yepthomi would be representing the Nagas well and speaking about Naga unity and also pursue for an early settlement of Naga political issue, besides working for all round development of the State.
Maintaining that the ensuing election will bring the PDA partners closer while it will be a test for them, Rio said “we should work hard for PDA not only complete this term but also provide a stable government to the people of the State for development and progress”.
Announcing the PDA will launch the fast and aggressive official campaign for the candidate in Dimapur on May 16, he called upon all the functionaries and workers of the alliance partners to work hard not for a mere win but for a thumping majority.
He also called upon the 36 elected representatives of PDA and all those defeated candidates of the February State Assembly election to take care of their respective constituencies.
Deputy Chief Minister Y Patton, State BJP President Visasolie Lhoungu, JD(U) Minister G Kaito Aye and Independent Minister Tongpang Ozukum asserted their fullest support to the consensus candidate while also declaring to work for the landslide win in their respective constituencies.
They also expressed confidence that Tokheho was the right choice to represent Naga people and that his win is eminent.
“It will be a shame if we fail despite being the government,” Patton said.
“The alliance partners must ensure the win of the consensus candidate to strengthen the ties with the Centre,” said Lhoungu, adding that this election is crucial and important as it will be first test of unity and strength for PDA.
Minister G Kaito Aye clarified that there was a tendency on the part of JD(U) to field a candidate and talks were on with the Central leaders because none of the political parties, including PDA had declared their candidate. Nonetheless, he said JD(U) today affirmed to remain united and work for the PDA consensus candidate. “Winning may not be a problem but it will be a test of our sincerity,” he said.
In his acceptance speech, Tokheho, a veteran politician asserted that going to Parliament he would take up the Naga political issue for an early solution as the State has been lacking behind because of the unresolved issue.
He also clarified that the bye-poll was necessitated as Rio had to resign as MP because the State and people was going through bad times under then NPF government and his service was required here.
Chaired by NDPP working president Nuzota Swuro the programme commenced with NDPP advisor Neiba Ndang delivering the welcome address and invocation by Pastor of Tikhir Baptist Church Kohima, Tsenthong. NDPP secretary general Abu Metha tendered the vote of thanks. (Page News Service)

At the NPF ticket distribution ceremony, Leader of Opposition, T R Zeliang said that the bye-election for the lone seat was compelled upon the Naga people because of the misadventure of former MP and incumbent Chief Minister, Neiphiu Rio.
He lamented that Nagas were not represented in Lok Sabha for the last more than three months, during a period when Naga political issue is at its peak because of Rio’s resignation.
Expressing that NPF and the Nagas in general are forced to face the extraordinary situation and premature LS bye-election, he said NPF being the single
largest party in the Assembly, all the elected members and also defeated candidates should come together to sent the party candidate to Delhi.
NPF president Dr Shurhozelie Liezietsu said that people of Nagaland were not expecting that bye-election would come because Lok Sabha election is not far off, but the sudden announcement by Election Commission of India was a surprise.
Nonetheless, he said, NPF welcomes the bye-election because this is an opportunity for the party to go to the people once again and share the guiding principles and objectives.
Narrating the ups and downs in NPF-BJP alliance, the NPF president said that BJP was not satisfied with and “walked out of the alliance themselves in search of greener pasture”. As a result, BJP got more than what they had asked from their NDPP partner and therefore today Nagaland has a defacto BJP government, he said.
He said that presently NPF MLAs are in the opposition and the party has no connection whatsoever with BJP. Stating that for sometime, even if BJP walked away from us (NPF), we continued to claim ourselves that we were in NDA because NDA belongs to many political parties.
But now, that issue is no more because NDA is dictated by BJP and they have already taken NDPP into their fold, he said, adding that under the circumstances, “we cannot continue to play the second fiddle and therefore, we have directed our Rajya Sabha MP, who is also the secretary general of our Party to apply for a separate seat in the Parliament when we are no longer having any connection with BJP-NDA here in Nagaland”.
Dr Liezietsu while informing that NPF had invited all secular forces to come together to fight against communal forces, said that the Congress in Nagaland has responded to the call in principal.
“We invite all secular forces to stand together to protect and defend the interest of the State and we hope some political parties will also come in due course of time,” he appealed.
In his acceptance speech, Jamir affirmed to sincerely take up the cause of Naga people, if elected to the Parliament.
NPF is truly the voice of the Nagas and we will negate the negative thought against us being propagated by the ruling party, he said. “NPF fought the last election with government on their side and became the single largest party in the State Assembly, but this time the challenge before us is much greater being in the opposition,” he said.
Nonetheless, stating that NPF has a positive prospect, he expressed confidence that with the support of the NPF elected members and also the Naga people he would win the bye-poll while appealing all the elected members and also the defeated candidates to be united and work hard.
Chaired by NPF working president Huskha Yepthomi the programme commenced with Senior Pastor of CBC (MH) Kohima, Rev Dr Vevo Phesao pronouncing the blessing while working president Apong Pongener tendered the vote of thanks.