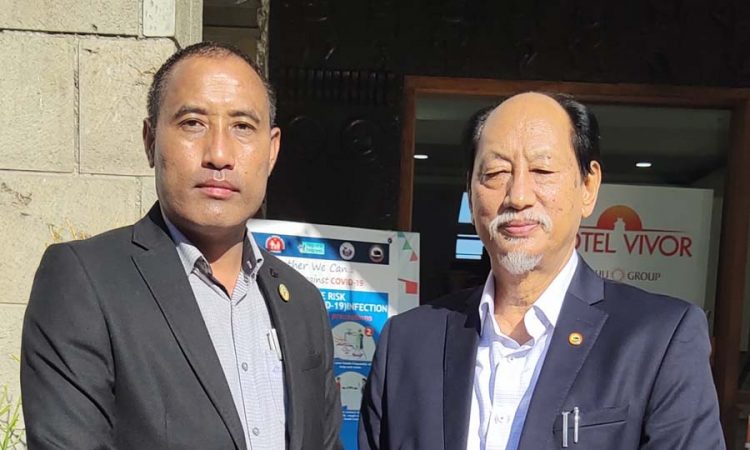 KOHIMA, NOVEMBER 11: Nagaland Chief Minister Neiphiu Rio, while saying that Nagas are going through a very critical juncture of political problem and lack of own resources today, called upon every section of the people including political parties to work together for peace and development in the State.

“Nagas are going through a very critical juncture… we have so many issues within the society. We are land of trouble… we are a land of insurgency and land marked with AFSPA to deal with us,” said Rio while addressing a thanksgiving service on the recent success of NDPP candidate Medo Yhokha in the bye-election to Southern Angami-I Assembly segment.
“We need peace, development and progress for the youth and younger generation to move ahead. At this critical juncture… particularly on Naga issue we all should work unitedly,” he said.
Everyone must work together without detecting any condition or terms upon each other, he said.
“Be the Treasury or Opposition Bench should come above party policies and programmes for the sake of the people to resolve issues and move forward,” Rio appealed.
Replying to queries from reporters after the programme on PDA not accepting Opposition leader TR Zeliang’s proposal of abandoning the Joint Legislators Forum (JLF) of the Assembly headed by Speaker and forming a new Parliamentary Forum of Nagaland under CM’s leadership, Rio lashed that “Opposition should not try to impose their suggestion on the ruling”.
For no reason they have walked out of the committed JLF which has been working for the cause of Naga issue for more than a decade, said Rio adding that “JLF is dear to us as so many meetings have been held passing several resolutions inside and outside the Assembly”.
The PDA partners – NDPP, BJP and Independent MLAs are still part of JLF, he said while questioning the NPF legislators what wrong has JLF committed that it needs to be abandoned and have a new platform to start from zero again.
“We cannot discard the history and hard work of JLF through the years,” he said.
Nonetheless, he said even if change is required proper discussions should be held but opposition cannot simply decide and tell the Government to do what they think”.
On his meeting with senior Assam Minister and NEDA convener Himanta Biswa Sarma on Sunday in Kohma, Rio said “we shared pleasantries and also discussed the problems… we also talked on how to work together and move forward”.
On holding a special Assembly session to discuss the Naga political issue, Rio said “Assembly is one platform where everybody can come together, so PDA will discuss and if need be a session will be held in good times”.
Expressing that the Coronavirus pandemic has struck the world and also confronting the State to the extent of impacting the economy, Rio said “unless we build our economy, we will be a liability to one another and to the country”.
Reiterating that the PDA Government wants to bring change for the better, he said PDA legislators and party leaders and workers should work really hard to reform society and also change the mindset of the people to be responsible to do our duties.
“The Government of India (GoI) is very kind to Nagas as we don’t have to pay tax but because we don’t pay tax, we don’t know the value of the economy,” he said.
Even though GOI is gracious and generous to us, there is competition among the states while some states are far ahead due to availability of their own resources but Nagas wait for Delhi for everything through financial support, he said.
Nagaland does not pay tax but yet has been receiving funds from the Centre, which is utilized for payment of salaries to Government employees, pensions, power purchases and other emergencies, he said.
Maintaining that Nagaland is currently facing a deficit of Rs 108 crores per month which would amount to more than Rs 1200 crore in a year, he called upon people to take economic upliftment seriously.
In this he said, the Government has been working to train the youths, promote agri and allied sectors and entrepreneurship to produce and be self-sufficient.
It is a challenge for the youth and the Government in the time of pandemic, he said.
“We have to participate and work hard to earn to build our society,” the CM said.
On PDA consensus candidate and BJP nominee losing the 60-Pungro-Kiphire seat, Rio said “PDA lost in Kiphire but we strongly feel that people are with us”.
On the early announcement made during the election campaign not to include Independent nominees into the PDA government, Rio said “the PDA will sit and discuss about it, but since Independent cannot join any political party, if they want they can support the Government and for us we can work together”.
Maintaining that this is the era and century of youths, Rio called upon the Naga youths to take the responsibilities of leading the Naga people. He challenged and called the youths to come forward and take the responsibility and also exhibit the services to demand for benefits.

He said winning the elections is not a lottery but it comes with sheer responsibility and commitment to work together for the party and the state.
Youths must not be over ambitious or jealous of other’s success but have to work in such a manner that they draw the attention of the elders and leaders to take the responsibility for people’s welfare, he said.
NDPP president Chingwang Konyak in his speech while congratulating Yhokha lauded the efforts of the party workers and PDA partners for the joint effort resulting in the success of the PDA candidate Yhokha. He also extended birthday greetings to Rio.
Nagaland BJP vice president Peter Rutsa, who read out the message of his president Temjen Imna Along, congratulated Yhokha and PDA partners for the win while also extending 70th birthday wishes to Chief Minister Neiphiu Rio.
On BJP losing the Pungro-Kphire seat, Along said “we could not attain success there even though all of us worked very hard as majority electorates decided to place their trust and mandate on one Independent candidate”.
Nonetheless, he said the beauty of the PDA Government is that we are inclusive, and we remain committed to our Common Minimum Programme to provide equitable development to all corners of the State, whether they have voted for us or not.
“The spirit of our alliance is still alive and we will continue to work for the betterment of our people,” asserted Along.
On behalf of the Deputy Chief Minister and BJP Legislature Party leader, Y Patton, Advisor for National Highways Dr Longrineken extended greetings while expressing hope that the PDA relationship would grow stronger and continue to work together to make the dreams of the people a reality.
Newest MLA, Medo Yhokha credited his win to God’s grace and joint effort and synchronized work of all the leaders and party men and women, including star campaigners led by Rio and alliance partners as well as supporters at the grassroots.
Saying that as a fresh MLA, he has to learn the dynamics of politics, Yhokha looked for the continued guidance and support of the senior leaders in the new political innings.
He said with the win it is now time to deliver the commitment for change and all round development while also opening up new vistas for the youth and people in general.
“It is time for me and those in Government to stand committed to the assurance given to the people during the campaign,” he said.
He reiterated unflinching support and loyalty to the Party and also asserted to work tirelessly for the uplift of the constituency and Nagas in general.