Kohima, March 22: Nagaland was placed under partial lockdown from Sunday midnight till further orders to contain and prevent the spread of coronavirus. The State has shut public transport, sealed borders and closed shops, allowing in only essential items.
State Chief Secretary Temjen Toy told media persons that so far there is no positive case of COVID-19 reported in the State but as precautionary measure, and in exercise of the powers conferred under the Epidemic Diseases Act, 1897, the Government has decided to lockdown the State from midnight tonight till further orders.
The CS said there will be restriction on movement of public, except those coming out of their homes for procurement and distribution of essential commodities, availing essential services, medical facilities and other basic needs.
“We are only restricting and not prohibiting as it will be difficult to check, but we expect people to follow that just like they have done in today’s Janata Curfew, because this is for our own health,” he clarified. 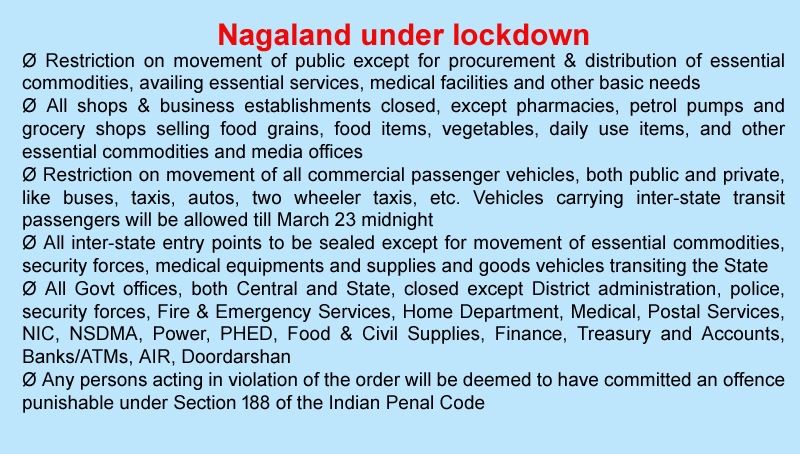 All shops and business establishments, except pharmacies, petrol pumps and grocery shops selling food grains, food items, vegetables, daily use items, and other essential commodities and media offices shall remained closed till further orders.
All commercial passenger vehicles, both public and private, like buses, taxis, autos, two wheeler taxis, etc will not ply till further orders. But vehicles carrying inter-state transit passengers will be allowed till the midnight of March 23.
The CS informed that all inter-state entry points will be sealed except for movement of essential commodities, security forces, medical equipments and supplies and goods vehicles transiting the State till further orders. But drivers and attendants of the vehicles transiting the State will be subject to medical screening as per laid down protocol.
The Chief Secretary said all Government offices, both Central and State, except District administration, police, security forces, Fire & Emergency Services, Home Department, Medical, Postal Services, NIC, NSDMA, Power, PHED, Food & Civil Supplies, Finance, Treasury and Accounts, Banks/ATMs, AIR, Doordarshan will remain closed till further orders.
However, Administrative Heads of Departments and Heads of Departments, Heads of Offices will form a core group of officers and staff to attend to urgent and essential matters. All other Government employees should be available on call.
He cautioned that any persons acting in violation of the order will be deemed to have committed an offence punishable under Section 188 of the Indian Penal Code.
Expressing concern on people and students working and studying outside, who are returning home following the outbreak of COVID-19, the CS requested all such persons entering the State after March 6 last to self declare with the health department and remain in home isolation for self quarantine.
Toy also said that the issue of racial discrimination as “Chinese” faced by the people of the State has been put forth to the Centre, while measures have been adopted to curb it.
He said till date no positive case has been detected in the State test but the lockdown has been necessitated so that people remains home.
“Remaining indoors, practicing social distancing and good hygiene is the only way to protect oneself and the society from being infected with the menace of corona virus,” he said.
On the preparedness of the State to face the challenges, Toy said all train services has been cancelled while decision on airlines is yet to be taken.
Further, asking people not to resort to panic buying because of the restrictions, Toy said there is no shortage of essential commodities. “We are not stopping entry of essential commodities into the State, and we don’t expect any shortage… we are not going to suffer because of shortage of essential commodities,” he assured.
Additional DGP, RP Kikon said out of the 30 persons summoned for circulating fake news about positive cases of COVID-19 in the State, two females were detained by the police but were released on bail bond not to repeat it.
Principal Secretary (Home) Abhijit Sinha was also present during the press briefing.
The Nationalist Democratic Progressive Party (NDPP) has meanwhile issued an advisory today cancelling all party meetings unless utmost urgent matter. The Central office will continue to operate with only necessary office staff but other members have been asked to avoid visiting office unless it necessary. All region offices have been asked to avoid mass gathering and minimize people to people contact and maintain social distancing.
Further members have been advised to stay at home and refrain from venturing outside unless it is very necessary.
“The State Government is leaving no stone unturned in its efforts to combat the pandemic and the need of the hour is for all sections to extend cooperation and support,” the advisory assured. (Page News Service)