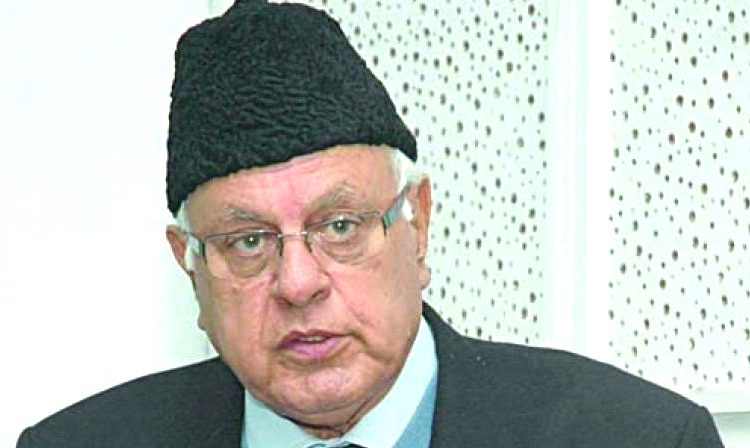 Srinagar, October 30: The Jammu and Kashmir administration prevented former chief minister and National Conference president Farooq Abdullah from leaving his residence to offer prayers at the Hazratbal shrine here on the occasion of Milad-un-Nabi on Friday, his party said.
Abdullah had informed about his visit to the Hazratbal shrine but the authorities stationed a truck outside his residence preventing him from leaving his house.
Political parties in Jammu and Kashmir condemned the action and termed it a “violation” of rights.
“J-K administration has blocked the residence of party president Dr Farooq Abdullah and stopped him from offering prayers at Dargah Hazratbal. JKNC condemns this infringement of fundamental right to pray, especially on the auspicious occasion of Milad Un Nabi SAW,” the NC said on its Twitter handle.
No one from the Jammu and Kashmir administration was available for comments.
Abdullah, who represents Srinagar in the Lok Sabha, was supposed to visit the Hazratbal shrine, on the banks of the Dal Lake, to offer prayers on the occasion of Milad-un-Nabi.
Milad-un-Nabi marks the birth anniversary of Prophet Muhammad and it is observed in the month of Rabi’ al-awwal, the third month in the Islamic calendar.
Former chief minister Mehbooba Mufti condemned the action and said it exposed “deep paranoia” within the government.
In a tweet, she said, “Preventing Farooq sahab from offering prayers on Milad Un Nabi SAW at Hazratbal exposes GOI’s deep paranoia and their iron fist approach towards JK. It’s a gross violation of our rights and is highly condemnable.”
The recently cobbled People’s Alliance for Gupkar Declaration (PAGD) comprising regional and some national mainstream political parties including the NC and PDP termed the action a “new low in curtailment of fundamental rights” of the people of Jammu and Kashmir.
In a statement, PAGD spokesperson Sajad Lone condemned the state administration for putting a blockade outside the resident of Abdullah and demanded that it be removed.
Abdullah is also the president of the PAGD.
Lone said, “Abdullah was slated to go to Hazratbal in order to participate in the religious congregation on account of Eid-Milad-Un-Nabi, however (he) was barred from leaving his house.”
“We strongly condemn the actions of the state administration which are tantamount to interference in the religious rights of Dr Farooq Abdullah. This marks a new low in the curtailment of fundamental rights of the people of J-K. We demand that the blockade be removed so that Dr Farooq Sahib is able to perform his religious duties,” he said.
The PAGD also “unequivocally and unambiguously” condemned the killings of three BJP workers by militants in Kulgam district of south Kashmir on Thursday.
“Political differences cannot justify use of violence. Violence has always and will crowd out sanity. We will always fight aggression in all its forms irrespective of the source of aggression,” Lone said.
The three BJP workers — Fida Hussain, Umer Hajam and Umer Rashid Beigh — were shot dead by militants in Kulgam’s Y K Pora area.
The Resistance Front (TRF), believed to be a shadow group of the Lashkar-e-Taiba, has claimed responsibility for the killings. (PTI)