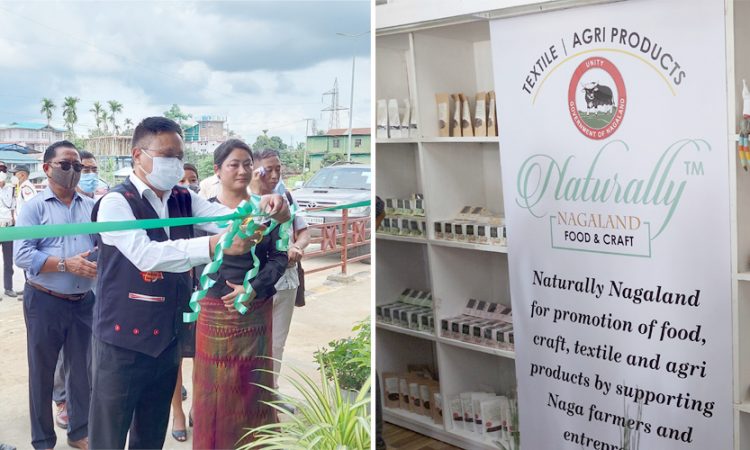 Inaugurating the outlet, Agriculture Production Commissioner, Y Kikheto Sema said that outlet was launched to fulfill the burning desire of the State Government to promote local entrepreneurs, farmers and Self Help Groups (SHGs) for marketing their products within and outside the State.
This is the first outlet in the State, while the next would be in Kohima, the APC informed.
He said under the Naturally Nagaland brand, all the indigenous products can come together for sale thereby popularizing the culture, food and lifestyle of Nagas to the world

He further mentioned that though many entrepreneurs want to sell their products in a standardized manner, they are unable to do so because of the financial and marketing constraints therefore the State Government has come out with this novel idea to provide an identity to the unique local products of the State.
Naturally Nagaland will extend the required support by creating a market chain for entrepreneurs while also identifying the indigenous and medicinal food products of the different districts and tribes, he stated.
Kikheto informed that the idea of Naturally Nagaland was conceived last year and initiated by former Chief Secretary Nagaland, late Temjen Toy and in this regard, the State Government has rechristened the State Emporiums in Delhi and Kolkata as Naturally Nagaland Emporiums during February 2020.
While promoting the Naturally Nagaland brand, the Government will not derecognize those entrepreneurs who have already created their own brand and established an image in the market therefore all the established entrepreneurs can also participate in selling their own brand through the window created by Naturally Nagaland, making it an umbrella organization for all brands.

Initially the Naturally Nagaland outlet will be in Kohima and Dimapur and it will be the link with outlets outside the State.
Additional Director DUDA, Anungla while explaining that the Government has created a window to help farmers said that the stall belongs to the people of Nagaland and encouraged one and all for availing the opportunity provided by the Government through the Agri and Allied Sectors.

She informed that Richard Belho would be coordinating the running of the stall where a sum of Rs,1000 per shelf per month would be realised from entrepreneurs to display their products in the State outlet and also at Delhi and Kolkota Nagaland Emporiums.
Commissioner and Secretary, Horticulture, Anenla T Sato, Director, Horticulture, Agriculture and HODs of several other Departments attended the launching programme.
(Page News Service)