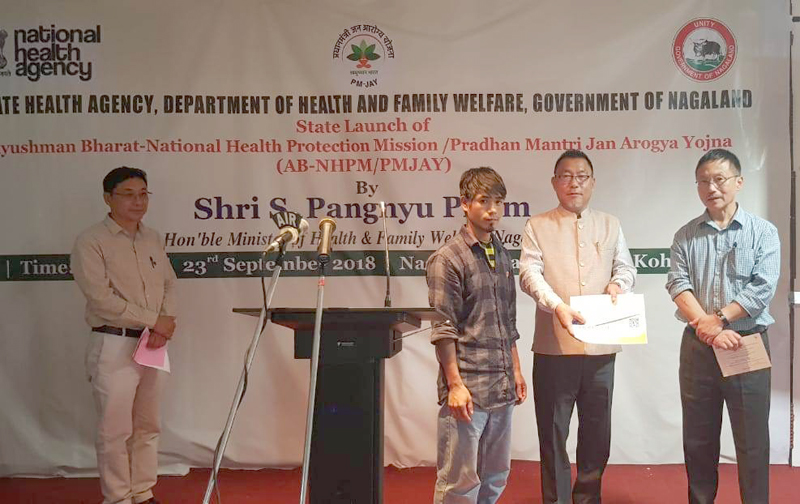 Dimapur, September 23: State Health Agency (AB-NHPM/PMJAY), Department of Health & Family Welfare announced the launch of the Ayushman Bharat- National Health Protection Mission /Pradhan Mantri Jan Arogya Yojana (AB- NHPM/PMJAY) by S Pangnyu Phom, Minister of Health today together with the rest of the country.
In his speech, the minister stated that the scheme was one of the Government’s initiative towards achieving universal access to quality healthcare services irrespective of financial status as every citizen has a right to a healthy life. He urged everyone to check their entitlement eligibility status from the nearest empanelled hospital or Common Service Centres.
The minister said that the scheme aims to reduce the burden of Out-of-Pocket Expenditure on hospitalization by providing entitled beneficiary households a benefit cover for the hospitalization expenses upto Rs. 5.00 lakh per family per year with no cap on family size and age of the family members.
About 1,550 health packages comprising of treatment for almost all secondary and tertiary ailments are covered under the scheme. The benefits would be cashless & paperless and can be availed from any of government hospitals or empanelled private hospitals across the country.
Families featuring in the defined Socio Economic & Caste Census (SECC) 2011 database of the State as well as existing enrolled RSBY(2016) Beneficiary families are entitled for this scheme, covering a total of about 2.33 lakhs poor and vulnerable families in the State.
The scheme is entitlement based as per SECC 2011 and RSBY 2016 data, hence there will be no separate enrolment drive under the scheme.
The Scheme was also simultaneously launched in all the districts across the state.
Dimapur:

Together with the rest of the country, Ayushman Bharat, Pradhan Mantri Jan Arogya Yojna for Dimapur was launched by Minister, PHE Nagaland, Jacob Zhimomi at the District Hospital Dimapur.
Elucidating on AB-PMJAY, Jacob said that it was a flagship programme of Government of India mooted by Prime Minister Narendra Modi, which basically aims to give medical attention in all the nook and corners of the country, keeping in mind the huge medical expenses and also to give equal attention to the poor people.
The scheme is about National Health protection, which will give health cover of Rs.5.00 lakh per family per year for hospitalization expenses for poor, marginalized and needy families, to the qualified beneficiaries, Zhimomi explained. He further informed that qualified beneficiaries of the scheme can get treatment anywhere in India in the empanelled hospitals on producing the e- health card. Jacob felt that seminars ought to be held across the districts to sensitize and create more awareness about the programme to the villagers in the rural areas.”
The package has to be passed down to the lower strata of the society,” he maintained. On the occasion, Jacob also expressed his desire for organizing Swaach Bharat programme in the district hospital Dimapur and assured of his assistance and cooperation if required. Marking the occasion, the minister handed e-health cards to 5 beneficiaries.
ADC Dimapur, Albert Ezung in his address termed health as one of the most important indicator of development. Health, Education, Social security are equally important when we intend to make development more meaningful, he observed. Ezung felt that health sector still remains an area of concern despite technological advancement in the medical field and said that such programmes need to percolate down to the rural areas.
He emphasized on the importance of proper identification of the deserving stakeholders and mentioned that village councils and functionaries could play an active role for successful implementation of the mission.
AB-NHPM/PMJAY eCards for the first 8 beneficiaries, including the first beneficiary to avail the benefits in the state, were distributed by the Minister. Similarly, eCards were distributed to beneficiaries during the launch in all the districts.
For more information on the scheme, citizens can contact at the following: helpline: 8794899089/9089776177/7628813737(state)| 1800111565/14555 (national)
email: nagaland.nhpm@gmail.com; website: www.pmjay.gov.in | check eligibility at : mera.pmjay.gov.in
(Page News Service)