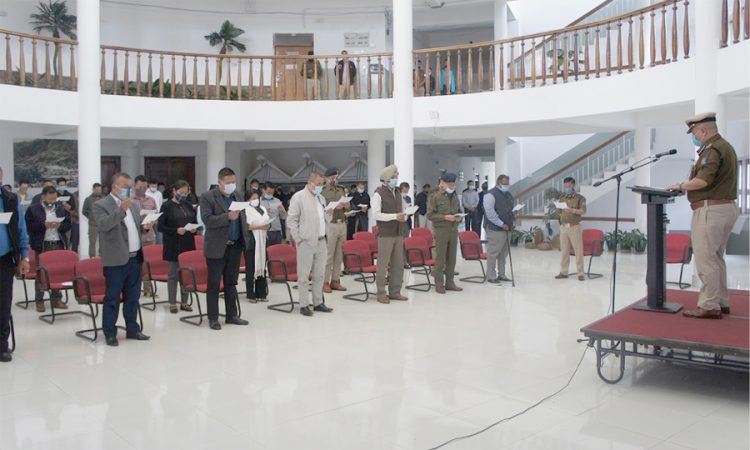 Kohima, October 31: Along with the rest of the country, Nagaland observed ‘The Rashtriya Ekta Diwas’ or ‘The National Unity Day’ in commemoration of the birth anniversary of Sardar Vallabbhai Patel, the first Deputy Prime Minister and Home Minister of Independent India.
Director General of Police, T. John Longkumer as the chief host, said Patel played an important role in the country’s struggle for independence and guided its integration into a united and independent India.
The DGP said, the Police forces in India including Assam Rifles have contributed immensely towards various internal security challenges.
“They are an integral part of the national security and instrumental in maintaining unity of the country,” he said.
It is in recognition of the galvanizing role played by the police, that the period October 21 to 31 has been declared as ‘Police Flag Day’ which culminates today with the observance of the National Unity Day, he said.
On the occasion, the DGP also administered the Pledge of Unity and called upon the gathering to renew their oaths to uphold the integrity and security of the Nation.
Noklak: To mark the Rashtriya Ekta Diwas, Mini Marathon was organized by Police Department on October 31 at Noklak.
Speaking on the occasion, Superintendent of Police, Noklak, Dr Pritpal Kaur said National Unity Day is celebrated every year to mark the birth anniversary of Iron Man of India, Sardar Vallabhbhai Patel who played a major role in the integration of India. To acknowledge the efforts in uniting the nation, we celebrate National Unity Day on his birth anniversary, she said.
Dr Pritpal Kaur advised the students and youths to set aim in life, work hard to achieve it and also encouraged them to contribute to the society in whatever possible ways. She congratulated all the winners’ and participants of the Mini Marathon and gave away the cash prize and certificates to the winners and participants.
In boys category, Puto, Sangtsoi and Ngon bag first, second and third position respectively where Monglon S and Mutchiu S got consolidation prize. Under Girls category, Tsuchoi T, Songmo P and Niansai got 1st, 2nd & 3rd positions respectively and Thongkoi T and Tongzen H were given consolation prizes.
SDO (C) Noklak, C. Phuniang administrated the Rashtriya Ekta Diwas pledge on the occasion.
The Mini Marathon race started from Govt. Middle School Junction (Penshe Sector) to GHSS Noklak (High School B Sector) where the prize distribution ceremony was held. Participants in the unity run / Mini Marathon race comprised of students, teachers, Red Cross Society, Medical Department, Khiamniungan Baptist Churches Association, Police Department, District administration and well-wishers.
(Page News Service)