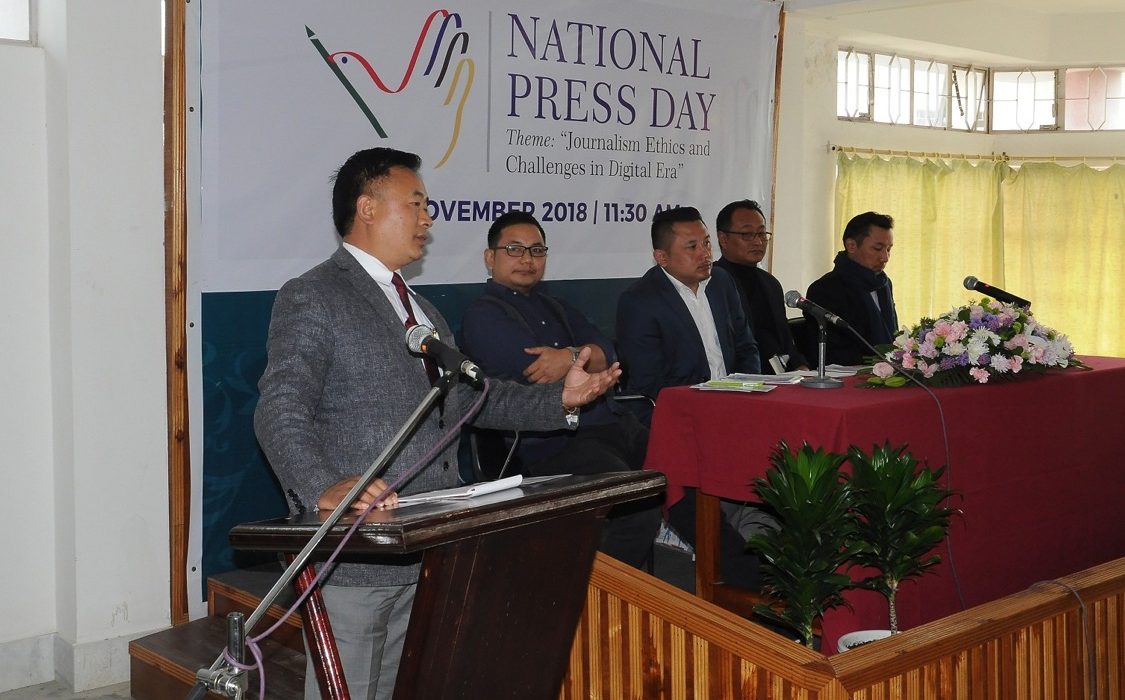 Dimapur, November 16: The National Press Day was observed Friday on the theme “Journalism ethics and challenges in digital era” in the conference hall of the Directorate of Information & Public Relations, Kohima.
This year the Press Council of India has deliberated on the topic ‘Journalistic ethics and challenges in digital age’ on the occasion of National Press Day. During the last two decades, the media environment has become increasingly digitalized, where the rate of information exchange and sharing have gone extremely high, the line of demarcation between the sender and the receiver in a communication has become blurred. Online journalism faces the crisis of attribution, authentication, credibility and error control perhaps its rules and procedures are still evolving.
In a panel discussion on the theme, panellists stressed on the importance of journalism ethics in today’s digital age. Participants in the discussion also raised questions on internet blackout, social media regulation act, media accountability, ethics of journalism, website updating, credibility of media, source authenticity, media bias etc, which were answered by the panelists.
Editor, Morung Express, Dr Moalemba said people preferably use social media as a medium of communication. Many a times people giving headlines news to undeserving ones and media people act a laptop rather than a watchdog, he said. He mentioned about the role and responsibility of media in this d17igital age saying that objectivity and impartiality are the hallmark of communication as fake news is becoming more and more in this digital age. He also asked the media agencies to verify the news items before being disseminated.
“Every profession has its own ethics,” said Project Coordinator, NSLSA, Tongpang L. Jamir. He mentioned that media is the watchdog and guardian of the society and its credibility depends on its ethics. He urged the media people to know the legal provisions and asked the media fraternity to ensure that they are independent and free from political interference.
OC Cyber Cell, PHQ, Michael Yhome said everybody has become a journalist in one way or the other. He cautioned the participants to refrain from sending fake news or rumours without its credibility being checked. He said social media has an immense impact in sensitizing and creating awareness to the general public irrespective of good or bad. He also suggested the need to have strict regulations and its mechanism in order to address the menace of fake news circulating in public domain.
Founder, The Naga Blog, Yanpvuo Kikon said that social media is used to communicate between people to people about the issues confronting our daily lives so as to bring constructive criticism. Whereas, here in Nagaland we use social media as news media instead of using news media, he added.
He also suggested the need to have regulations/mechanism so that there will be no infringement of rights and responsibilities between social media and print media as both of them are part of the digital revolution.
Earlier Director, IPR, Limawati Ao stressed on the importance and impact of digitalization. He thanked the press clubs of Kohima, Dimapur and Mokokchung for attending the programme.
The programme was chaired by former president KPC, H Chishi. Vote of thanks was proposed by president MPC, Limalenden Longkumer.
The moderator for the panel discussion was Deputy Director (Training) ATI, Dr. Hovithal Sothu. He wrapped up the discussion with some important points like checking the accuracy and authenticity of news, learning to differentiate from the important news from trivial news, interactive accessibility, knowing the difference between social media and news media.
Editors and officials from different newspaper agencies attended the programme. (Page News Service)