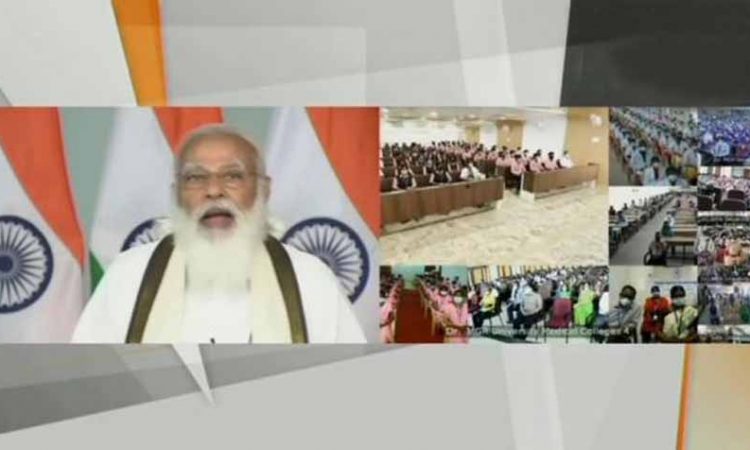 Chennai, February 26: The government is transforming the entire medical education and healthcare sector in the country and as part of the initiative, the National Medical Commission would bring great transparency, Prime Minister Narendra Modi said on Friday.

The Prime Minister requested doctors to take care of their health as well by choosing a fitness regimen and by sticking to humour which shall help them, the patients and others like staffers.
Wishing students well and professional growth, he said “rise above self-interest, doing so will make you fearless.”
“Friends we are transforming the entire medical education and healthcare sector,” he said addressing the 33rd convocation of the state-run Tamil Nadu Dr MGR Medical University through video conferencing.
The National Medical Commission would bring great transparency and also rationalise norms to set up new medical colleges, he noted.
“It will also improve the quality and availability of human resources in this sector.”
The NMC Bill was passed in both houses of Parliament in 2019 and it came into force last year. The aims of the Commission include improving access to quality and affordable medical education.
Modi said during the last six years, MBBS seats increased by more than 30,000, which is a rise of more than 50% from 2014.
The number of Post Graduate seats increased by 24,000 which is a rise of around 80 per cent from 2014. In 2014, there were six AIIMS in the country. “In the last six years, we have approved 15 more AIIMS across the country.”
The Centre permitted the establishment of 11 new medical colleges in Tamil Nadu and the new colleges would be set up in districts that currently do not have a medical college. “For each of this college the Government of India will give more than Rs 2,000 crore.”
Doctors are among the among the most respected professionals in the country and after the coronavirus pandemic this respect has gone up even more.
“This respect is because people know the seriousness of your profession where many times, it is literally a life and death question to someone.”
Still, he requested the doctors to “keep your sense of humour intact” which would help cheer up patients and keep their morale high.
Humour would give people hope which is crucial in recovery and this shall also help doctors in taking care of their own physical and mental health as theirs was a high pressure profession, he said.
The Prime Minister urged doctors to take care of their health and fitness by choosing from options like yoga, meditation, running and cycling to ensure their well being.
Over 21,000 students were being conferred with degrees and diplomas and of them 70 per cent were women, he noted and conveyed his special appreciation to women.
It was always special to see women leading from the front in any field and it was a moment of pride and joy, he said.
“The success of you all and this institution would have made the great MGR (M G Ramachandran, former Chief Minister and AIADMK founder) very happy. His governance was full of compassion towards the poor. The subjects of healthcare, education and empowerment of women were dear to him.”
Recalling his visit to Sri Lanka a few years ago where MGR was born, he said India was honoured to be working for the Tamil sisters and brothers there, in the healthcare sector.
Referring to initiatives like ambulance services and a hospital for the welfare of the Tamil people, he said it would have made MGR happy.
Telling students that they would now see transition from learning to healing, he said they were graduating at a time when there was great appreciation and respect for Indian scientists, medical and pharmaceutical proffesionals.
The COVID-19 pandemic was a completely unexpected occurrence for the world and there were no pre-set formula for anything and at such a time India had not only made a new path but also helped others walk with it.
India has among the lowest death rates and recovery rates are high while the nation made medicine and vaccines for the world, he said.
“Overall the Indian health ecosystem is being seen with new eyes, new respect and new credibility. However, this also means that the world will have greater expectations from you which is a responsbility on your young and strong shoulders.”
The learning from the pandemic could help fight other diseases like tuberculosis too, he said.

Citing saint poet Tiruvalluvar’s line that any treatment covered four elements of the patient, doctor, medicine and the care-giver, he said throughout the pandemic all these four pillars were at the forefront, fighting war with an unknown enemy.
Such people who fought the virus from the front emerged as “heroes of humanity.”
He referred to Central welfare schemes including the PM Atmanirbhar Swasth Bharat Yojana, Ayushman Bharat and said the Jan Aushadhi Kendras have been increased to more than 7,000 that provide medicines at ‘much cheaper’ rates.
Medical devices like stents and knee implants have been made much cheaper in our country helping crores of needy, he said. (PTI)