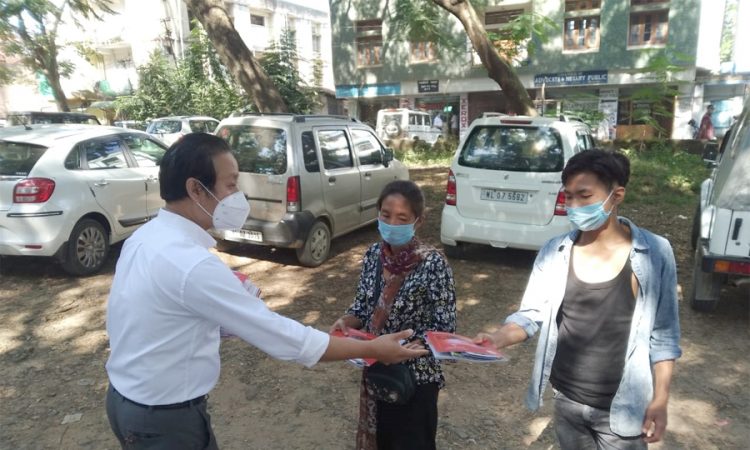 Longleng: As the primary aim of the day was to spread awareness among the people, the Longleng DLSA organized a legal awareness programme with the Legal Literacy Clubs under Longleng DLSA at the district Court premises.
AAP cum Government Pleader Vito K Chishi shared his prosecution experience with the students and also the constitution values and rights enshrined in the constitution. He also spoke on the core value of legal services, which are for the weaker section and marginalized people in the society.
JMFC Holika Sukhalu spoke on the inception and purpose of celebrating Legal Services Day, while Secretary LDLSA, Ajongba Imchen appreciated the LLC members for being part of the district legal services authority. He stated that the purpose of legal services should not only be heard but should also be felt and seen by the people of Longleng district and also be accessible to the citizens.
Dimapur: The Dimapur DLSA distributed legal literature/pamphlets to the public in the District Court, Deputy Commissioner Office premises and nearby areas. Around 2000 numbers of pamphlets were distributed today. Meanwhile, the DLSA sensitized on various rights and services provided by legal services authorities and the importance of the day.
Phek: Phek DLSA also highlighted the significance of the day and with an aim to give more publicity and awareness on legal aid programme/ schemes to the weaker sections of the society, free distribution drive of legal phamplets/leaflets to the citizens was initiated.
Wokha: Legal Aid Clinics of Wokha District Legal Services Authority(WDLSA) through the attached Para Legal Volunteers created awareness on NSLSA (effective implementation of poverty alleviation schemes) Scheme 2015, NALSA (Legal Services to the Victims of Drug Abuse and Eradication of Drug Menace )Scheme 2015, various welfare schemes, importance and purpose of legal aid clinic. The awareness was conducted by way of programme, door to door campaign, distributing legal pamphlets by Er. Zuchobemo Odyuo, PLV Bhandari, Wobemo Murry PLV Sanis, Zujano Kikon PLV Wozhuro, Ajano Ngullie PLV Longsa, Tsanthungo PLV District Jail Wokha.
(Page News Service)