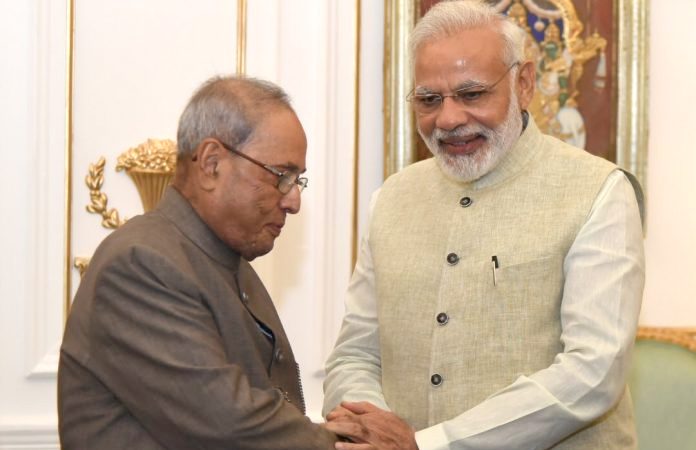 New Delhi, January 6: The decisive mandate the BJP got in two consecutive general elections in 2014 and 2019 indicated voters’ preference for political stability, according to former president Pranab Mukherjee, who said Narendra Modi “earned and achieved” the prime ministership.
Mukherjee also said in his memoir that Narendra Modi became prime minister “through popular choice” unlike Manmohan Singh “who was offered the post by Sonia Gandhi”.
Every general election has its “importance because the issues that are debated during the polls reflect the various views and perceptions of the electorate”, Mukherjee wrote in his memoir “The Presidential Years, 2012-2017” which he completed before his death last year.
” The 2014 verdict was historic for two reasons. First, after three decades, a contesting political party received a decisive mandate instead of a fractured one,” he wrote.
The second reason, he said, is that the BJP emerged with a simple majority on its own in the Lok Sabha for the first time and was thus able to form the government, though it still did so by co-opting its allies.
“But the real winner was the electorate that came out in large numbers and voted decisively, thus indicating its preference for political stability, which it believed would result in development-oriented politics,” the former Congress stalwart and union minister wrote in the book, which was released on Tuesday.
Mukherjee said he was also of the belief that people were dejected with coalitions and the behaviour of political parties changing sides for parochial gains. “Coalitions are often formed with the only common agenda of blocking a particular party or individual from coming to power.”
Comparing Modi with Singh, Mukherjee said the route to prime ministership for the two prime ministers he worked with was very different. Mukherjee, who was the president from July 25, 2012 to July 25, 2017, had worked with both the prime ministers during his tenure.
“Dr Singh was offered the post by Sonia Gandhi; she had been chosen as the prime ministerial candidate by the Congress Parliamentary Party and other constituents of the UPA, but she declined the offer ,” he wrote.
“Modi, on the other hand, became PM through popular choice after leading the BJP to a historic victory in 2014. He is a politician to the core and had been named the BJP’s prime ministerial candidate as the party went into campaign mode. He was then Gujarat’s CM and had built an image that seemed to click with the masses. He has earned and achieved the prime ministership,” he added.
Mukherjee wrote he had very cordial relations with Prime Minister Modi during his tenure.

“However, I did not hesitate to give my advice on matters of policy during our meetings. There were several occasions when he echoed concerns that I had voiced. I also believe that he has managed to grasp the nuances of foreign policy quickly,” the book said.
Mukherjee’s approach to maintaining cordial relations with Modi was rooted in the fact that “I believe in the parliamentary form of government and its principle”.
On the Congress’s performance in the face of Modi’s surge in 2014, he wrote, ” There is no escaping the fact that the Congress had failed miserably to fulfil people’s expectations and aspirations. In fact, after the campaign, when all the formalities were complete, several important Congress leaders and ministers met me at Rashtrapati Bhavan for various reasons. Interestingly, none of them expected a clear majority for either the Congress or the UPA combine.”
Talking about his advice for decisive mandate in upcoming elections in his Republic Day address in 2014, Mukherjee remarked tongue-in-cheek in his book, published by Rupa Publications, “Of course, people may say that the voters responded to my advice and gave a conclusive mandate in favour of PM Modi to form a government on his own.”
Mukherjee also wrote that he wasn’t sure of the numbers and massive mandate of the BJP before 2014 elections but was impressed seeing the planning and hard work of Modi.
“Only Piyush Goyal, the then national treasurer of the party and now a cabinet minister, was confident that the BJP would get no less than 265 seats, and that the number could go up to 280. I didn’t and still don’t know the reasons for his optimism. However, I took him seriously when he gave me Modi’s detailed electioneering schedule, which was not only gruelling but also painstaking,” he said.
Mukherjee also appreciated Modi for the quick grasp of the nuances of foreign policy.
“When Narendra Modi took over as PM, he had absolutely no experience in foreign affairs. As the CM of Gujarat, he had visited some countries, but those visits were limited to engaging for the good of his state, and had little to do with domestic or global foreign policies. Foreign policy was, therefore, a truly uncharted territory for him,” he wrote.
“But he did what no PM had attempted before: invite the heads of government/state of SAARC nations to his oath-taking ceremony in 2014 – and this included Pakistan’s then PM, Nawaz Sharif. His out-of-the-box initiative took several foreign policy veterans by surprise.” (PTI)