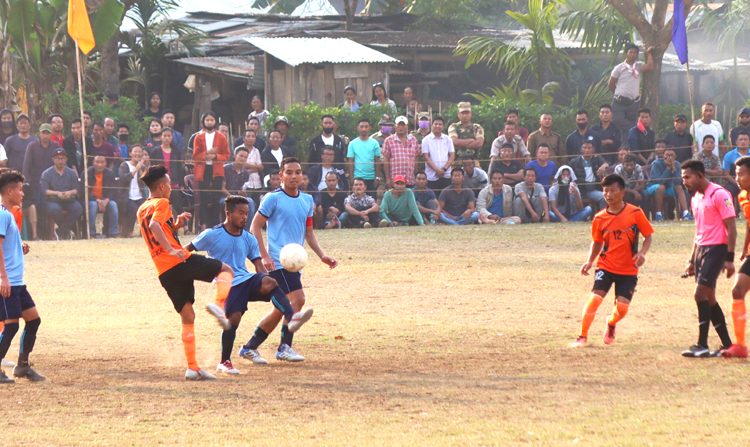 Dimapur, March 6: Nallong (White) FC and Jalukie B Youth (A) won their respective semifinals match to set up a final clash on Monday of the 15th Jalukie Valley Open Football Tournament.

Playing in front of the packed ground on Saturday here at Jalukie ‘B’ local ground, Nallong FC stunned the two times defending champions Wihiambo FC Jalukie by a solitary goal in the first semifinal match.
Nallong FC who had lost two semifinals match in the earlier edition against Wihiambo FC finally got their peace of mind avenging their defeats this year as they overpowered the defending champion team. The lone goal came through the boots of Kawililakbou in 2 minute of the first half for Nallong FC.
With Rhitsho Mero the talisman of Wihiambo FC out of the game following a red card in the quarter finals match, the team failed to fill up the gap. The lackluster finishing from the defending team got the better off as they crashed out of the tournament in the semi final round.
Wihiambo’s playmaker Khiuwangbo Awang Kaurintah was send off in the second half leaving 10 players on field for two bookable offenses as they failed to break the deadlock and end their saga in the tournament.
Meanwhile, Jalukie B Youth (A) got the better off against Benreu FC in a five goal thriller match. In the second semifinals, Jalukie B Youth (A) overcame Benreu FC 3-2 in the extra additional time to secure a victory and enter the final of the tournament.
Despite ball dominance from Benreu FC, Sehginthang Hangsing scored the first in the 37th minute for Jalukie team.
Minutes later Benreu winger Kevisanyu Peseyie should have find the equalizer when he won a penalty. However Jalukie goalkeeper James managed to save his penalty to end the first half in favor of Jalukie FC 1-0.
In the second half, Peseyie amended his mistake by finding the net in the 55th minute to bring back the game.
It was a short stay as the goal was cut short when Bapen Yintong scored in the 55th minute for Jalukie FC team.
With the match heading in favor of Jalukie B, the last quarter of the match saw Benreu FC captain Kethozapu Zeliang finding the equalizer making it 2-2 to end the match in stalemate.
In the extra additional time, Jalukie forward Samuel struck the winning goal to secure a victory and send Benreu FC home.

The tournament is being organized by Jalukie Valley Youth Organization. This year 26 teams have participated for the tournament.
The final match will be played on Monday. (Page News Service)