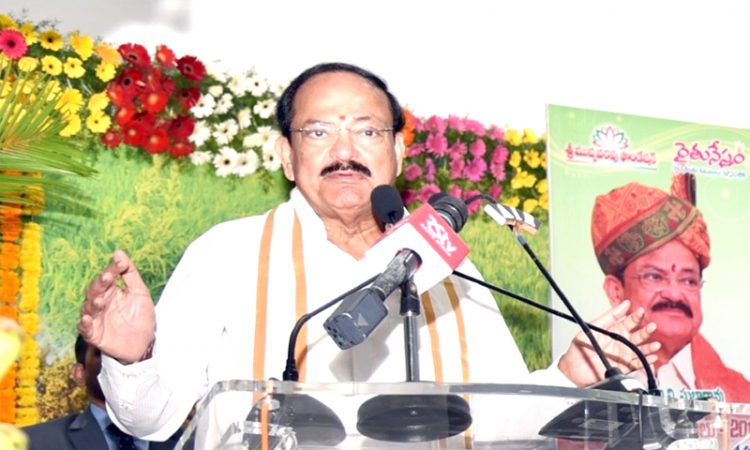 Addressing the ‘National Dialogue – Indian Agriculture Towards 2030’ event organised by UN-body FAO and Niti Aayog, he said there is a need to reduce input costs in the agriculture sector and also tap potential in the food processing segment.
The Vice President also emphasised on reducing dependence on chemicals and adopting organic farming in a big way for the health of the nation.
Naidu called for coordinated action by both the Centre and states to make agriculture profitable.
“As farmers are unorganised and voiceless, the four Ps — Parliament, political leaders, policymakers and press must pro-actively adopt a positive bias towards agriculture. In fact, a radical shift in making agriculture profitable is the need of the hour,” the Vice President said.
Naidu noted that loan waivers and subsidies provide temporary relief to farmers and are not sustainable solutions. He said there is a need for both long-term and short-term measures to ensure remunerative prices to farmers.
“Promoting e-marketing extensively, cold storage facilities and refrigeration vans should cater to farmers’ needs in a big way. Providing uninterrupted power round-the-clock and extending timely credit at low-interest rates are crucial to make agriculture profitable and viable,” he said.
Naidu listed out four key sets of challenges that Indian agriculture has to address for the future.
“Foremost among these is the challenge of food security and better nutrition for our growing population. In fact, the time has come to switch the focus of our approach from ‘food security’ to ‘nutrition security’,” he said.
The Vice President talked about the challenge of sustainability of natural resources as well as adverse impact of climate change. This calls for a heightened focus on technologies that increase water use efficiency, he said.
“Lastly, the farmer and the farm worker at the heart of the agricultural landscape deserve all total, undivided attention. It is our moral responsibility to ensure that we give him a bright future that recognises the blood and sweat of our ‘annadata’ which constitutes Indian agriculture,” Naidu said.
The Vice President also expressed concern about the increasing lack of interest in farming among educated youth.
“Changing socio-economic milieu, increasing agri-input costs and diminishing returns have turned agriculture into a less preferred profession among the youth,” he said, adding that the trend needs to be reversed.
Naidu further said in the wake of the pandemic, the world is looking towards India.
“We need to seize the opportunity and give special impetus to agriculture to not only sustain self-sufficiency but also export to other countries and further strengthen India’s economy,” he noted.
Stating that agriculture input costs have gone up significantly, Naidu urged policymakers and other stakeholders to work towards reducing the costs.
Towards this end, he also suggested promoting organic farming in a big way.
Organic farming is beneficial for all — farmers, consumers and the environment, he said, and called for making organic agriculture a mass movement not only for a ‘wealthy nation’ but also a ‘healthy nation’.
The organic food segment in India is expected to grow at 10% during 2015-25 and is estimated to reach Rs 75,000 crore by 2025.
“Welfare of our farmers is at the core of all the agricultural policies and programs framed by this government,” Naidu said, adding that the Prime Minister has taken various measures for doubling farmers’ income.
The Vice President also highlighted the increasing female participation in agriculture.
As per the Agriculture Census conducted every five years, the percentage of female operational holdings in the country increased from 12.78 per cent during 2010-11 to 13.78 per cent during 2015-16.
“A rise in migration of men from rural to urban areas has been a prime factor attributed to this change. Hence, our policymakers need to pay special attention to this increasing participation of women in agriculture and make suitable policies for their welfare,” Naidu said.
To turn the farmers into ‘agri-entrepreneurs’, he said efforts should be made to establish strong lab-farm links and farmer-industry interaction should be promoted.
“Creation of ‘Business Incubation Centres’ would also be a step in the right direction for aspiring farmers in this field,” Naidu said.
The Vice President said that in recent months, the country has witnessed not only the coronavirus and its variants, but also desert locusts and now the bird flu.
“These problems have taught us that in the post-COVID world, there is urgent need, among other things, for disaster-proofing food and farm systems, reviving the rural economy and greater emphasis on health and nutrition, particularly of vulnerable sections of society,” Naidu said.
Speaking at the event, Niti Aayog Vice-Chairman Rajiv Kumar said the country has achieved food security and the focus should now be more on nutritional security.
He said there is a need to seriously look at cropping patterns and suggested crop diversification as demand of fruits, vegetables and other nutritious products are on the rise.
Minister of State for Agriculture Parshottam K Rupala said the agriculture sector was a bright spot during the pandemic, and grew by 3.5 per cent in the first quarter of the fiscal. (PTI)