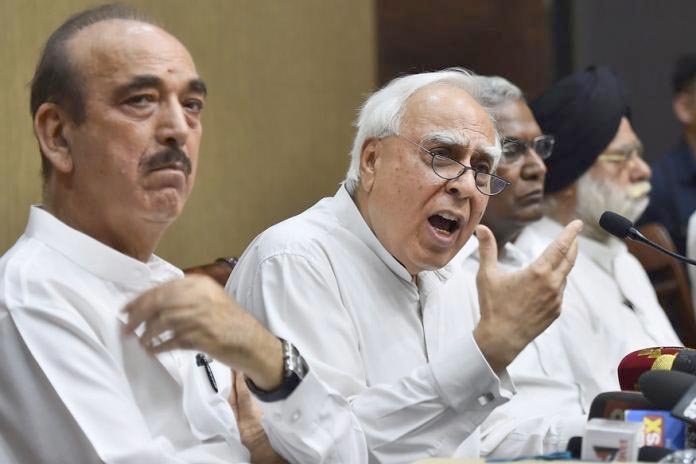 New Delhi, April 23: The Congress today lashed out at Rajya Sabha Chairman M Venkaiah Naidu for rejecting an impeachment notice filed by opposition parties against Chief Justice of India Dipak Misra and said it would move the Supreme Court to challenge the illegal order which had shattered the confidence of the people.
Senior Congress leader Kapil Sibal told reporters here Naidu’s order jeopardised the country’s legal system and said the government was not keen to see a probe into the case.
To say the least, the order is unprecedented, illegal, ill-advised and hasty,” Sibal said, adding that it had been passed without a full-fledged enquiry.
“We will certainly move a petition in the Supreme Court to challenge this order, Sibal asserted.
Describing Naidu’s move as “unprecedented”, the Congress leader stressed that never before in India’s history had a motion moved by MPs been dismissed at the preliminary stage.
“It is illegal because the chairman has passed an order which is required to be passed after a full-fledged inquiry,” Sibal said, adding that the Rajya Sabha chairman had to only ascertain whether the motion was in order.
He wondered what the hurry was to reject the motion which had the valid signatures of 64 MPs.
“It is our privilege to move the motion. You cannot boot the privilege in this manner,” Sibal said.
The order had shattered the confidence of the people and jeopardised the legal system, he added.
“It seems that the government is very keen that this (charge made in the petition) must not be allowed to be inquired into. Maybe they have information that the CBI has information, maybe by scuttling the inquiry they don’t want a lot of information to come on record. It puts the judicial system into jeopardy,” he said.
The order destroys the legitimate processes of the law. It seeks to ensure that no enquiry takes place, he added.
“We will certainly move the petition in the Supreme Court. We are confident that when we move the petition, the CJI will have nothing to do with it so that it is heard and the serious issues, which are constitutional in nature and which will determine whether we bring transparency to the system, would be heard in the court, Sibal said.
Earlier in the day, AICC media-in-charge Randeep Singh Surjewala had also criticised the decision and said it was a fight between forces “rejecting democracy” and voices “rescuing democracy”.
Surjewala said within hours of 64 MPs submitting the impeachment notice, Leader of the Rajya Sabha Arun Jaitley had shown “naked prejudice” by calling it a revenge petition, “virtually dictating the verdict” to the Rajya Sabha chairman.
In a tweet, Congress spokesperson and lawyer Abhishek Manu Singhvi said Naidu “expectedly” rejected the impeachment motion and that too within a day of his return to Delhi.
Naidu had earlier today turned down the impeachment notice given by the Congress and six other opposition parties against CJI Misra, saying it lacked substantial merit and that the allegations were neither “tenable nor admissible”.
The other parties were the CPI, CPI(M), NCP, SP, BSP and the IUML. (PTI)

Zoonotic diseases need to be curbed to prevent outbreaks like COVID-19: UN

US military to stand with India in conflict with China, indicates WH official