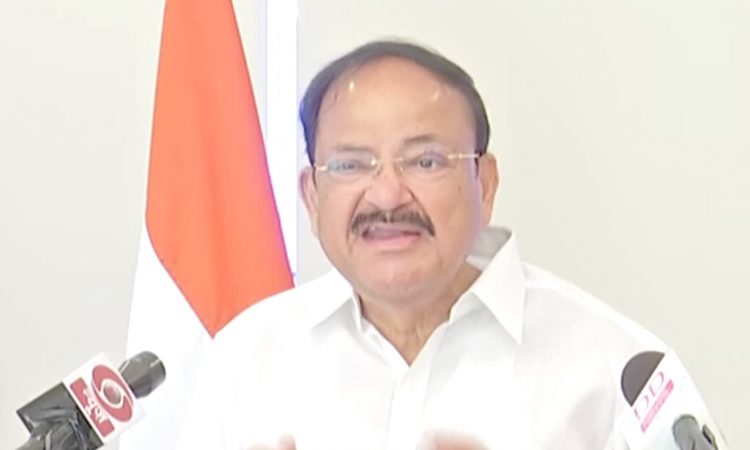 New Delhi, November 11: Underlining that water is a finite resource, Vice President Venkaiah Naidu on Wednesday called for a change in lifestyle and make water conservation a way of life.
He said reduced use of water also results in less use of energy required for pumping and supplying water to homes, offices and farming activities. In effect, it will also help in reducing pollution, he noted.
“Unless we reduce the wastage of water and take up saving and conservation of water on a war footing, there is a danger of potable water becoming a scarce resource in the future,” Naidu said.
With the rising population, he said, urbanisation, industrialisation and expanding agricultural activities, the water requirement will continue to increase.
“The key message that needs to be taken to people again and again is this: the water that is available is finite. It is not unlimited. It is the responsibility of each and every citizen to save water and use it judiciously. The need of the hour is to change our lifestyles and make water conservation a way of life,” Naidu said.
The vice president was speaking at the National Water Awards to honour the excellence in water management and conservation across the nation. Tamil Nadu bagged the ‘Best State’ award, followed by Maharashtra and Rajasthan.
Practises like micro-irrigation, drip and sprinkler systems have to be promoted in a big way for efficient use of water for agriculture, he said.
“Reduce, reuse and recycle must be the watchwords if we have to handover a sustainable and liveable planet to the future generations,” he said.
Naidu pointed out that watershed development is another area that can spur local economic development, job creation, biodiversity protection and climate resilience.
He added that there should be a ‘Jan Andolan’ on water conservation and underlined the importance of people’s participation in making it a success.
Naidu said India’s current water requirement is estimated to be around 1,100 billion cubic meter per year and it is projected to touch 1,447 BCM by 2050.
India has more than 18 per cent of the world’s population but has only 4 per cent of the world’s renewable water resources and 2.4 per cent of the world’s land area.
“A scarce natural resource, water is fundamental to life, livelihood, food security and sustainable development and it is our duty to take all possible steps for conservation of this limited precious resource.
“It is the responsibility of each and every citizen to save water and use it judiciously,” Naidu said
He suggested municipal authorities and other local bodies to make rainwater harvesting mandatory for every new building.
“The role of corporates in effective reuse of water is essential in the management of the resource. It is imperative that every section of our society plays its part to bring about a Jan Andolan in India,” he said. (PTI)