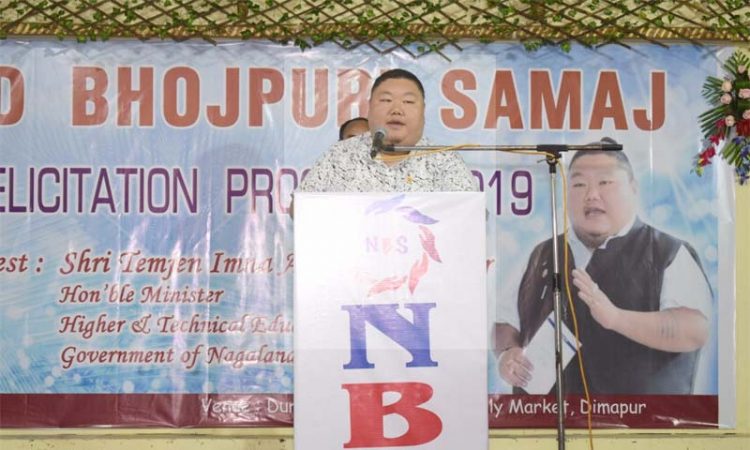 Dimapur, June 23: Minister for Higher & Technical Education and State BJP president, Temjen Imna Along Longkumer on Sunday said stated that Nagas will stand up and live with India.
Though Nagas might not have a documented history, the culture of the Nagas are as old as the Indians and Nagas will stand up and live with India, he said while addressing the 9th felicitation programme organized by the Nagaland Bhojpuri Samaj to felicitated community toppers and meritorious students here at the Durga Mandir Hall, Dimapur.
The Minister said there is a need for the Nagas and non-Nagas living in the State to be united in peace and understanding in their thoughts as the progress that Nagaland has made so far is not because of the Nagas alone but the non-Nagas have contributed much towards it.
Temjen stated that in Nagaland everyone should have the opportunity to grow, feel secured, and make progress. Observing that while most of the non-locals in Dimapur are business owners, the Minister said he would like to see them in other sectors too in the near future and even in the State assembly as there is an unreserved constituency in Dimapur.

Nagaland has tremendous scope of making progress but it is still lagging behind due to the limitations of people here, he said adding Nagas have much to learn from the outsiders. He also urged the non-Nagas to view and treat Nagas as their own and forgive their actions when needed as not everyone is the same.
“We might look different and have different culture, but in our hearts and mind, we are the same,” he said. He also advocated the need for cultural exchange and asked the gathering not to remain boxed in Dimapur alone but display their culture to other interior parts of the State too, and in a similar way, Nagas should not remain in Nagaland only but take the Naga culture to other parts of the country.
“We are proud to be together,” he said, while calling upon the people of Nagaland to trust each other and not the propagandas they read in WhatsApp or Facebook.
Advising the students to have goals and have patience, he said those who want to have everything right immediately will fail in their aspirations, but those who have goals, patience, and work on them, nothing will be able to hold them back. He also asked them to talk about Nagaland and remember the State when they go outside.
Earlier DC Dimapur Kevekha Kevin Zehol said all that the students need are in them and they can be anything and do everything. He narrated the story of Arunima Sinha, the first female amputee to scale Mount Everest, and said that she despite having no legs made it to the top of Everest by sheer will power and they can do anything too.
During the ceremony, students who cleared their HSLC and HSSLC examinations 2019 were felicitated besides various civil societies and eminent personalities. It was also dotted with numerous cultural and patriotic performances. (Page News Service)