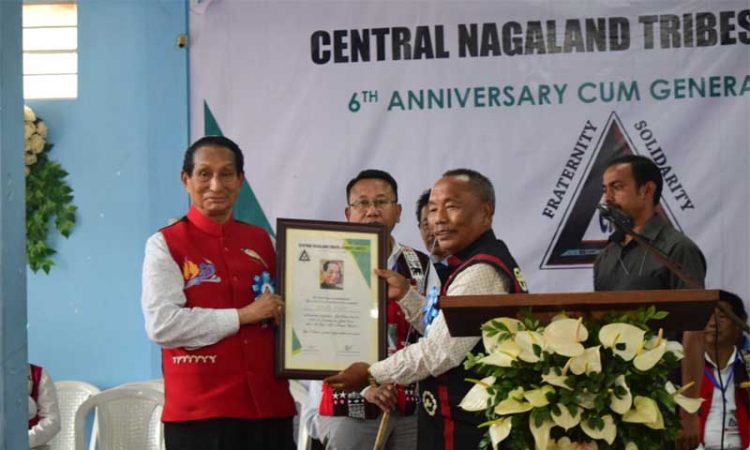 Dimapur, March 12: Former Governor of Odisha and former Chief Minister of Nagaland, Dr S C Jamir today called upon Nagas to adapt to the changes taking place, which are very swift and quick.
Addressing the 6th annual general session of the Central Nagaland Tribes Council (CNTC) here, Dr Jamir said that Nagas are standing at a very crucial situation. “Naga people today are on a shallow borderline….which side to go we have not decided.”
He said that Naga people continue to grow in darkness, adding the common people as well as the leaders are obsessed today.
On the uniqueness of Naga history, the veteran politicians asked, “Who made it?” and went on to say, “Our ancestors”.
“We belong to the current generation…will you be satisfied with the past history?” he asked.
Stating that even the education acquired in the past is not comparable to the present day education, Dr Jamir said if Nagas have to go forward, they must have thinking, passion, ideas and language, which has to be raised according to the level. He also called upon the Nagas to understand how people in other places move forward and said if they (Nagas) cannot reach their level, they should at least try to come up.
On being pointed out that the CNTC comprises of the three most advanced tribes-Ao, Sema and Lotha, Dr Jamir called upon these tribes to come together and take the lead to strengthen the Naga society. He called upon the members of the CNTC to develop their outlook.
Stating that today Nagas-both overground and underground are confused, he asked what has been the outcome of multiple factions in the state. He said this has completely undermined the goals set by our forefathers. He lamented that even nationalism in overground people have shattered and collapsed while the house remained divided today.
Dr Jamir also explained how the Framework Agreement signed on August 3, 2015 in the presence of Prime Minister and Home Minister has brought everything under the parameters of the Indian Constitution. He reminded that the Centre’s Interlocutor, R N Ravi has time and again explained to the people about the contents of the Framework Agreement, but the Naga people still ask what is the content.
The former Chief Minister asked the Naga people to adopt positive approach to Naga political problem and appreciate the difficulties faced by both the negotiating parties.
He said it is not only the duty of the CNTC but also the other tribes to work together for a final solution. He further appealed to the CNTC not to think only about the three member tribes, but for all other tribes in the state. “This we can do when we broaden our mind,” he added.
Stressing for a united, progressive, harmonious and peaceful Nagaland, he said like Israel, Nagas should have the “will power” to survive. “If we can imbibe this spirit I am very sure Nagaland will play an important role in shaping the destiny of the people,” he further said.
Earlier presidential address was delivered by Hokiye Yeptho, President, NTC and short speeches by President, Ao Senden, Chubawati Longchar, Chairman, Lotha Hoho, Er Mhondamo Ovung, President, Sumi Hoho, Hekhushe Shikhu and President, NTC, Toniho Yeptho.
On the occasion, new team of office bearers were also inducted with N Matong Jamir as president, Hukiye and Khondao Ngullie as vice presidents; Er K L Moyo-general secretary; C Onen Walling and Kakugha Rotokha-joint secretaries; Jonah Achumi-finance secretary; Lanu Imchen-information & publicity secretary; Ekonthung Lotha-cultural secretary and Hokiye Yepthomi-Chief Advisor. (Page News Service)