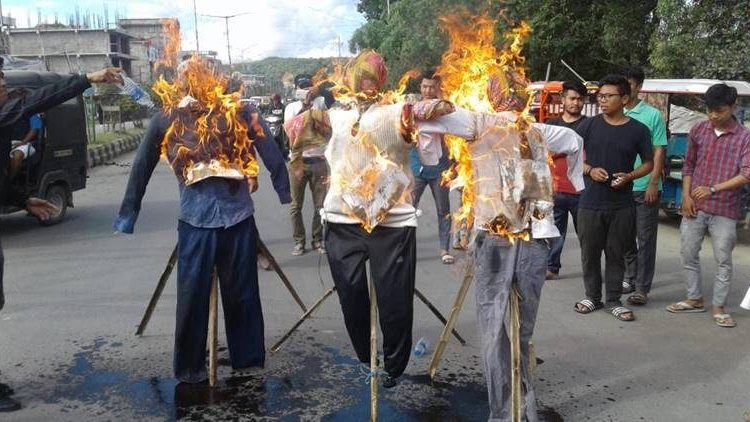 Imphal, September 12: The United Naga Council (UNC), the apex body of Nagas, urged the Manipur Government to try to reduce the increasing tension in the state, particularly in Imphal valley, alleging that the law and order situation has become ‘progressively’ bad to worst.
The Naga apex body issued the statement in the wake of the protest against the ‘Nungba incident’ launched by the All Manipur Students Union (AMSU). In the aftermath of the alleged assault and extortion meted by cadres National Socialist Council of Nagaland Isaac-Muivah (NSCN-IM) on a team of musicians led by the AMSU on September 3 at Nungba, the students body imposed 100 hours total blockade along the National Highway-37, which is largely inhabited by the Zeliangron Nagas, on September 8 midnight. While NSCN-IM refuting the claim as false, AMSU also organised different forms of protests in the valley demanding arrest of those involved in the Nungba incident.
In a statement, UNC said deep animosity and distrust between two ethnic groups is hotting up in the state when the Naga people are striving for the restoration of peace and communal harmony to live together as a good neighbour.
“The Naga people have exercised maximum restraint to any challenges but is giving cautionary message to face any forms of situations,” the statement said.
“The deep social and psychological divide present in the state of Manipur will continue until and unless the hard facts of one’s history and originality is mutually honoured and respected,” the statement asserted, adding that the present problem is the product of two different people living together from different origin and history.
Several attempts have been made politically, socially and culturally for the last many decades to maintain social harmony in the state, yet all remained unsuccessful, it noted.
It held that the final settlement of Indo-Naga political issue at the earliest is the only answer to bring durable peace, security and stability in the region. Moreover, the Naga political issue is a fact of life in South-East Asia and this hard fact cannot be wished away by any forces, the UNC added.
The Naga body also urged the Government of India to give up its traditional policy of looking at Naga resistance movement from a security point of view.
It said no amount of money pumped into Naga territory could put an end to Naga National Movement as the Naga National struggle is not aiming at the economic development and that the struggle continued for more than half a century basically for political recognition of Naga as a distinct Nation. (Courtesy: IE)