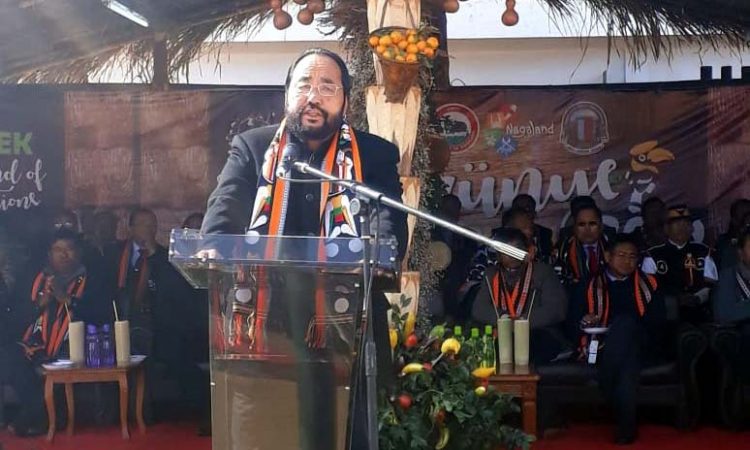 Dimapur, January 23: Nagaland Deputy Chief Minister, Y Patton on Thursday called upon all section of Naga society to unite so that the Indo-Naga peace settlement can be brought about without further delay in the interest of the present and future generations.
“We are at the threshold of solving the long pending Naga political issue. The negotiating parties had successfully concluded the talks on 31st Oct 2019,” he said while addressing the valedictory session of All Sumi Students’ Union (SKK) general conference at Yehemi village on Thursday.
Patton said the legislators, under the banner of Joint Legislators Forum (JLF) on Naga political issue, had joined hands, irrespective of political affiliations, to facilitate the peace process for an early settlement.
“Naga people want permanent peace in our land. This is an opportune time for us and I hope that all sections of our societies will unite so that peace settlement could be brought about without further delay for the interest of the present and future generation. We need peace for development, for more opportunities to the youth and for developing one’s own personality in pursuing the goals and dreams. Together, let us work in unity to realise this common aspiration for a better tomorrow,” he appealed.
Looking at the young audience in the conference, Patton remarked that the past, present and the future seems to have come together in unity. “You will be the future of the nation tomorrow, determining the course of history and I encourage all the younger generations to work hard for academic excellence as there is no substitute for hard work in the present competitive world. We need to develop a positive attitude in the process of self-discovery and empowerment.”
Patton also asserted that it is very important to have “dreams” in life and that one needs to set them sky high and strive for excellence to achieve them. “Don’t stop chasing your dreams until you achieve them,” he said.
Reminding that the economy of Nagaland is salaried based economy and the aspiration of the majority of present day educated youngsters are to vie for getting jobs in Government sector instead of taking up challenges in venturing out for entrepreneurship, Patton said job avenue in the State Government sector has reached saturation point and there is no option or avenues to absorb the educated unemployed youths in Government service alone. He called upon the SKK members and the leaders to take up an exemplary lead in changing from our olden ways of thinking to a new thought process towards bringing a positive change in the society. (Page News Service)