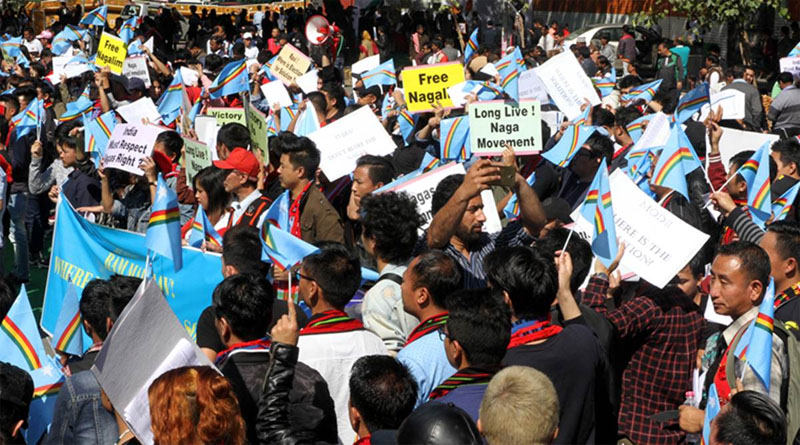 Imphal, September 10: As the Indo-Naga peace talks reached its final stage, Nagas in Manipur have strongly come out in support of National Socialist Council of Nagaland Isak-Muivah faction’s (NSCN-IM) demand for a separate “National” flag and Constitution.
Several Naga bodies under the aegis of the United Naga Council (UNC) sent a representation to Prime Minister Narendra Modi on Monday drawing the attention for an “honourable” solution to the protracted Indo-Naga political “conflict” through peaceful dialogue.
UNC general secretary S Milan said the representation was drafted after a presidential council meeting was held on September 5 at Senapati district. The meeting included as many as 25 different Naga communities comprising student and civil bodies.
The representation stated that the Nagas appreciate the official recognition of “unique history and situation” of their community and the subsequent signing of the Indo-Naga Framework Agreement on August 3, 2015. It further said that any “honourable” solution must be concluded based on the agreement.
“The rising India under the PM’s leadership must be magnanimous enough to resolve the issue with respect and honour”, said the representation.
Government of India and NSCN must be reminded that the failure of the hard-earned peace process may once again lead to the breakdown of the Ceasefire that may renew the confrontation that will be detrimental to peace and cause extensive destruction of lives and properties of innocent masses, added the representation.
The NSCN-IM had just recently said that any solution to the ongoing Indo-Naga peace talks without Naga flag and constitution would be far from “honourable”. The statement comes at the time when Modi reportedly asked the Nagaland Governor RN Ravi, who is also the interlocutor of the peace talks, to settle the issue within three months’ time. (Courtesy: IE)