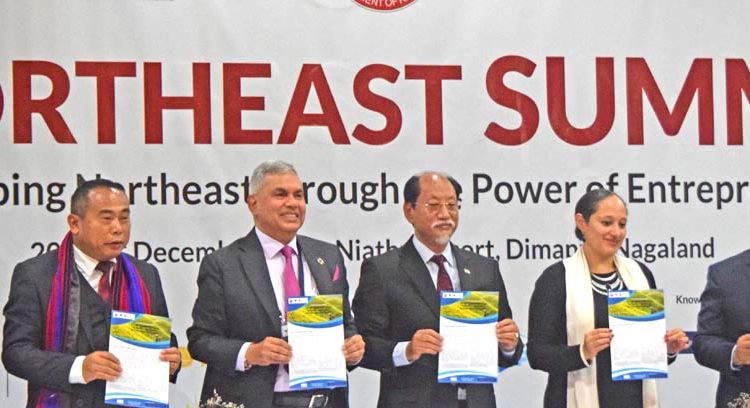 Dimapur, December 20: Nagaland Chief Minister, Neiphiu Rio today said that Nagas are at a point of time, at a historic threshold, to bring about a revolutionary change provided “we all act and think together” and the magic of this would be the “Entrepreneurship”.
Delivering the keynote address at the 1st Northeast Summit on the theme, ” Developing Northeast through the power of entrepreneurship”, the Chief Minister said that his government is committed to a process of change, reform and restructure to help usher in new changes.
“We are in the process of drawing a New Industrial Policy that will help promote Micro and Small Enterprises with a special focus on startups that will include agriculture sector,” he said adding the new industrial policy would focus on empowering the local entrepreneurs along with establishing manufacturing hubs and economic zones.
He also informed that the government intends to take up cottage industries, handloom and handicrafts, natural and agricultural products of Nagaland and added that the state can also be an organic state.
Rio said that the Government is looking at the constraints to the investments in the state and is devising means for a ‘new land record and land use policy’.
“We intend to revise our power policy to facilitate investment in hydro power sector and we have set up the Investment and Development Authority of Nagaland (IDAN) to help set all these into motion,” he said.
However, he said a situation needs to be created to facilitate production and the supply chain linkages while encouraging innovative investments in multiple sectors including tourism, agriculture, IT, BPO, entertainment, education, handloom & handicrafts.
He also said credit and financial services need to be provided to entrepreneurs and tackle the issue of collaterals amidst a tribal environment, which would require both the bankers and the clients to change their attitude.
Stating that the Northeast remains a pristine tourism hotspot, he said Nagaland, the Land of Festivals is emerging as a premier local for travelers to experience eco-tourism, adventure tourism and cultural tourism. He also said the annual Amur Falcon Conservation Week attracts thousands of nature lovers from around the world.
“It is my dream that Nagaland should be both a producing state and also a centre of creativity and a hub of originality in ideas, innovation and unique products,” he said and expressed optimism that not far into the future, the ingenuity of the creative Naga youth would emerge as a major strength with proper logistic and technical support.
While appreciating the changes taking place in the state, Rio said lots more needs to be done. He stressed on exploring innovative financing options beyond government assistance to grow the state’s economy.
“CSR funding is critical in supporting our local economies, skill our people, build better social infrastructures and also enhance our conservation efforts,” he said and also emphasized on preserving the rich cultural heritage of the state.
Earlier, Rio said that today’s scenario is changing dramatically, adding the turbulent era is fast becoming a matter of the past with democratic negotiation taking the place of gunfire and the possibilities of peace looming, especially the settlement of the long standing Naga political problem.
With the region becoming more peaceful and the nation more prosperous, the focus of the government is for building infrastructure, he said and highlighted some of the ongoing projects in Nagaland like the four-lane highway, railway line up to Zubza.
He said India is defining and redefining the “Look East” policy to “Act East” policy and various other policies are further, underway to give new directions and visions to the people, especially the youth.
The youth are becoming responsive to the changes and are beginning to think along new and pioneering lines, he added.
He hoped that a cohesive effort in areas of sharing ideas, expertise and logistic support between the Government and the various organizations present in the Northeast Summit would enable enhancing the capacity of the entrepreneurs and provide them a much needed platform not only for economic self-reliance but towards building up a strong local economy that focuses on nurturing talent and promoting creativity.
Director, IIFT & Honorary Economic Advisor, IDAN, Dr Manoj Pant said that people must understand Northeast is not homogenous, adding states like Sikkim is wealthy while Assam and Manipur are at the bottom.
He said during 1991, the richest Northeastern state was Manipur but today it is the poorest due to insurgency. He, however, said the 2015 Framework Agreement will find a solution to the insurgency problem in the region. It is not Naga problem, it is Northeast problem, he added.
He said the history of development of other states is new. Even history of development in Nagaland started in 1997 when the peace process started.
Asking what to do now, Dr Pant said there should be employment strategies, basically agriculture labour force. He said there is a subsistence level of agriculture in the Northeast.
He further said entrepreneurship has four facets-risk taking, production, sale and trade.
On the occasion, Union Minister of Commerce & Industry and Civil Aviation, Suresh Prabhu gave a video message to the delegates present at the Summit.
The Summit will conclude on December 21. (Page News Service)