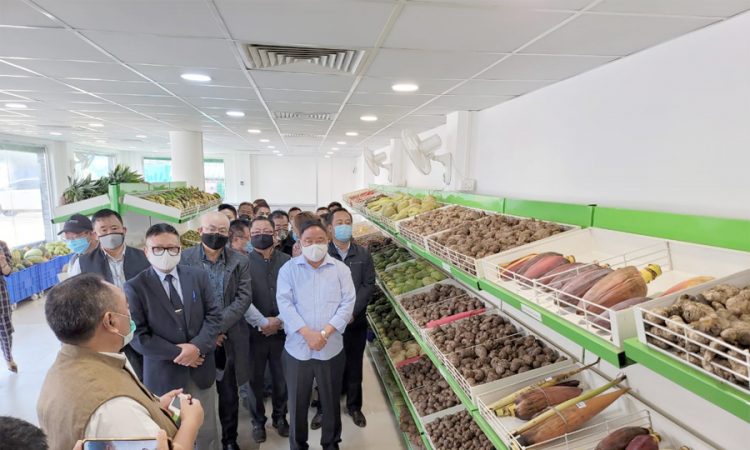 DIMAPUR, DECEMBER 8: Nagaland today got its first Organic Air-Conditioned market complex at the NSAMB Complex, Agri Expo, Dimapur, which has been constructed at the estimated cost of Rs 948 lakhs. Along with the AC market, a cold storage facility was also inaugurated at the same location.

Inaugurating the Organic AC Market, Minister for Agriculture and Cooperation, G Kaito Aye said it was a red letter day for farmers and just a new beginning of a vision to uplift the farmers’ community.
The Minister said the facilities have been provided for the benefit of farmers and the Department.
He urged farmers and the Department to look for customers and buyers, adding marketing of the produce should be timely. The Minister also opined that the products of Nagaland can be marketed both nationally and internationally.
He appealed to the Agri and Allied Departments to gear up and not to shove off responsibilities to certain people or Departments.
He also said that the message about the AC Market and Cold Storage facility should reach out to farmers in nooks and corners of the state.
Kaito appealed to the Agriculture Production Commissioner (APC), Director and CEO of the Department to increase production capacity and take the state towards self-sufficiency. He also stressed on organic farming.
Stating that the land is fertile for all crops, the Minister lamented that people are not trying to cultivate crops.
He further said Indo-Naga issue does not have anything to do with farming, therefore, people involved in agriculture should continue farming. He said when solution comes, there would be peaceful atmosphere. “What we are getting, we are not going to get beyond that,” he commented.
Agriculture Production Commissioner (APC), Y Kikheto Sema credited Agriculture Minister, Kaito Aye for the developments taking place in the Agriculture sector of the state. He said it was due to the initiative of the Minister that the Government of India sanctioned additional amount under Rashtra Krishi Vikas Yojana (RKVY) during 2019-20 for the project.
He said the Department wanted a facility for the farmers’ community, so the foundation stone for a Farmers’ Hostel was laid today.
“We have decided to come together to do something for our people. Earlier, we have done in scattered manner. Now all the Agri and Allied Departments should come together,” he said.
Stating that there is no scope for large and medium industries in Nagaland, Kikheto said the only hope is for Agri & Allied Sector.
He said the Department has decided to create awareness among farmers to go for integrated farming as jhum cultivation is not economically sustainable.
Chief Executive Officer, NSAMB, G Ikuto Zhimomi disclosed that Nagaland State Agriculture Marketing Board (NSAMB) was established in 2005 and 19 APMCs (Agricultural Produce Marketing Committees) were established in 11 districts and functions under NSAMB.
He also informed that the NSAMB is affiliated to the National Board, COSAMB (Confederation of State Agriculture Marketing Board) and NSAMB has been notified by the state Government as Nodal Agency for Agricultural Export Policy implementation in 2019.
Zhimomi informed that the state agricultural produce by farmers are organic by default as claimed, yet certification of state agricultural produces remains incomplete, except certification of crops in 6000 hectare area under Organic programme implementation through the State Department of Agriculture & Horticulture.

On the total market area inaugurated today, Zhimomi said it has an area of 42230 sqft, which accommodates 2000 sqft for AC daily market; 1750 sqft for Cold Storage of 100 MT capacity; 2700 sqft for collection and grading, packaging; and 2500 sqft for mini-park and water fountain.
The daily AC market and cold storage is powered by solar energy, besides DG and Grid power supply.
(Page News Service)