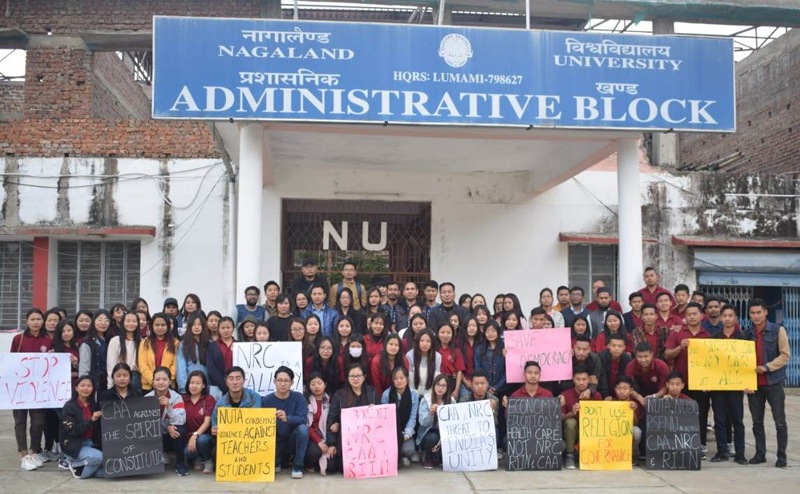 Kohima, February 12: Teachers and students of Nagaland University on Wednesday staged an anti-CAA protest at its four campuses spread in Kohima, Dimapur and Zunheboto districts of the State.
The protest against Citizenship Amendment Act (CAA) 2019 was jointly spearheaded by Nagaland University Teachers Association (NUTA), Research Scholars Forum and Nagaland University Students Union (NUSU).
Addressing the gathering at the Meriema campus of the University in the State capital, NUTA Central Executive Council president, Prof. Rosemary Dzuvichu said the protest is against the NRC, CAA and attacks and atrocities against university teachers and students’ fraternity across the country during the past months.
“Police who are supposed to protect the citizens have now become the attackers and have started attacking students,” she lamented while maintaining that ‘this kind of attack is of grave concern for all’.
National Registry of Citizens (NRC), a classic case that is not working in our next door Assam and has caused unrest to the people, detained in detention centers, who could not trace their legal papers. Our concern is also for the Naga citizens on Register of Indigenous Inhabitant of Nagaland (RIIN) that the word “indigenous” had already become controversial to the people of Nagaland, she said.
“If we are going to have registry for the indigenous people, what are the modalities and norms that are going to be followed, she questioned while stating that the Government has not been very clear on this.
She felt that the thinking of the State Government on being protected by Inner Line Permit (ILP) as incorporated through CAA is wrong. “ILP is actually a permit to all Indian to enter our State because we are indigenous population and therefore ILP is just a permit to enter,” she pointed out.
She also alleged that ILP has lots of loopholes with so many illegal immigrants in the State despite various efforts to contain the menace.
We cannot rewrite history and I think it is very wrong to neglect the Muslim population, said the professor and asserted it is undemocratic and unsecular that policies must be based on religion.
NUTA Meriema campus president, Prof. B V Rao, Professor D Kuolie, Prof. GT Thong and vice-president of NUSU, Chinge also addressed the gathering extending solidarity with the rest of the country protesting against CAA/NRC and the subsequent violence and attacks. (Page News Service)