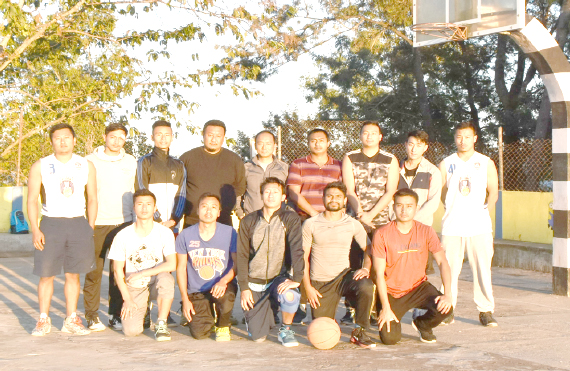 Dimapur, December 21: Nagaland is gearing up to participate at the Senior National Basketball Championship for the first time, come January 2019. The Nagaland Mens Team, currently under intensive training at Kohima, will participate at the 69th Seniors National Basketball Championship for Men and Women, to be held in Bhavnagar, Gujarat from January 5 to 12. The National Event is being organized by the Basketball Federation of India (BFI) with Gujarat State Basketball Association as the host.
It might be mentioned that Nagaland Basketball Association has been successful in organising the state’s participation at the Sub-Junior National in Didwana, Rajasthan during October 2017 and the Junior National at Ludhiana, Punjab in May 2018. With this upcoming participation at the Senior National Championship, Nagaland’s presence at the National events is a big boost and encouragement for the sport’s players and enthusiasts.
NBA Honorary Secretary Teisozhavi Theünuo has, in a Press Release informed that the State’s team was finalised after a trial selection, where 12 players were shortlisted to represent the State. The team players/ballers include various champions and “Most Valuable Player” title winners in the local arena. Two players have the experience of participating at National championship by representing other states in previous years.
Thejangulie Mekro, who is currently undergoing training at Europe Basketball Academy, Barcelona is one to watch out for, amongst the other towering hoopsters set to brush shoulders with the best players of the nation. The team has been training hard under the guidance of Technical Director, NBA, Medozhatuo Rutsa. Team Manager, Thinuoneilhoulie John and Team Coach Medohu Rutsa, will lead the team at the Championship event.
Nagaland will be clubbed under Group B and will have to battle the league. The players are excited about the participation as it will open up avenues for players and the state as a whole. The NBA, inspite of various limitations, is trying to promote Basketball as it is a popular and well loved sport in Nagaland.
Currently, Tamil Nadu is the defending champion and the Services are the runners up.
(Page News Service)