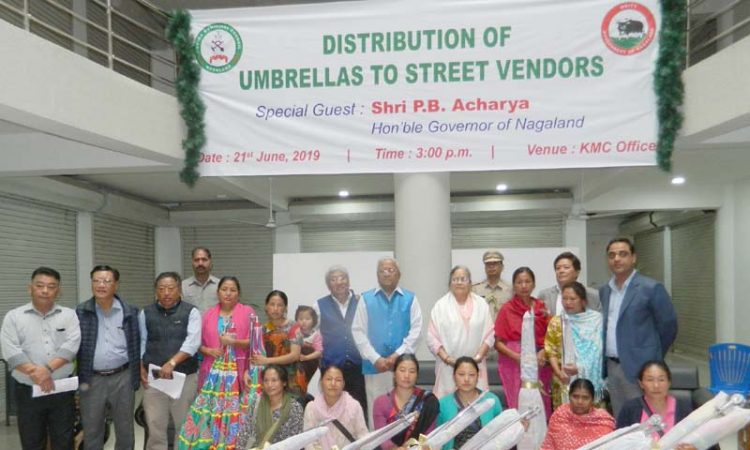 Nagaland Governor PB Acharya, his wife, MLA Dr Nicky Kire and other dignitaries along with the street vendors during the umbrella distribution programme at KMC complex on June 21, 2019.

Kohima, June 21: Nagaland government is gearing up to fully implement the Nagaland Street Vendors (Protection of Livelihood and Regulation of Street Vending) Scheme and Rules 2019 from July.
This was informed by State Mission Director and Secretary State Urban Development Agency (SUDA), S Takatuba Aier during a programme for distribution of 10 giant umbrellas to women street vendors here Friday.
Aier informed that the State government has enacted the two Nagaland Street Vendors (Protection of Livelihood and Regulation of Street Vending) Scheme and Rules and published in Gazette on April 15 last while both the scheme and rules would be fully implemented for all the municipal and town councils of the State from July 2019.
Once the scheme and rule comes into force, the respective municipal and town councils shall constitute respective Town Vending Committee for allocation of proper space for the street vendors and also provide other facilities besides looking into their security and welfare, he said.
Addressing the gathering Governor P B Acharya while expounding on the welfare of the street vendors said, “the security and respect of the street vendors should be given priority.”
Acharya said it is high time to understand that everyone need to get security and respect and that awareness campaign should be intensified in the society to highlight the role of street vendors in building economy.
“No one can remove street vendors unless proper space is allocated,” he said, while also urging the educated lot of the society to create awareness on the different central government schemes which have been brought about for needy and downtrodden.
“Somewhere something is lacking in the society and that citizens should educate the weaker section of various schemes that is available so that people will get benefit through the schemes,” he said.
He also encouraged entrepreneurs to take up the responsibility through their services.
The Governor and his wife Kavita Acharya along with Advisor for Rural Development, MLA Dr Neikiesalie Nicky Kire distributed the umbrellas to 10 women street vendors.
The distribution was done through lucky draw conducted by Director in-charge of Rajya Sainik Board, Rajeev Dong in presence of the hundreds of street vendors.
Kohima Deputy Commission Anoop Khinchi chaired the programme while Kohima Municipal Council Administrator Kovi Meyase delivered welcome address. (Page News Service)