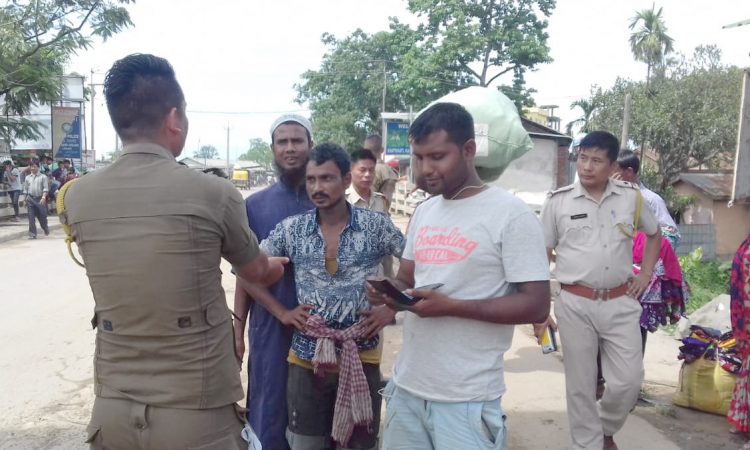 Police personnel checking documents of people coming from Assam to Dimapur on Tuesday.

Dimapur, July 31: Nagaland has stepped up vigil along the porous borders of Assam, following the publication of draft National Citizens Register (NRC) yesterday. People coming from across the border are being thoroughly checked by police personnel and once satisfied they are allowed to enter.
Since Monday evening, such checks have been conducted at New Field Check Gate, Dillai Gate, Dimapur Railway Station, Bus Stand etc. Today also police personnel had stepped up vigil in these areas and thoroughly checked people who had entered Dimapur from Assam.
Sources said that police personnel are also deployed at such places from where people can cross to Nagaland easily without going through the normal check gates.
There is a general fear that after the NRC exercise in Assam, large number of people would migrate to Nagaland after they do not find their names in the NRC draft. Such people are suspected to be illegal Bangladeshi immigrants.
Sources informed that even people travelling in private vehicles, two-wheelers crossing the border into Nagaland are also being frisked.
Earlier on July 27, DC Dimapur has issued an order directing all village/ward authorities to take measures to strictly monitor influx of people from outside the state in violation of the existing rules/norms without their respective jurisdiction. He had also asked them to report any unusual influx of people from outside the state, besides check the antecedents of the new incoming tenants and verify them.
In today’s exercise, police personnel asked for various papers for verification of the identities of the people of doubtful origin entering Nagaland. Such exercise is likely to continue in the Nagaland. (Page News Service)