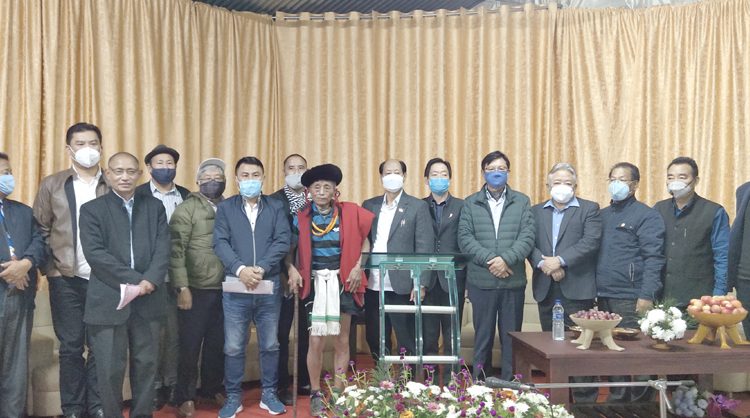 Pfuchama, October 27: Stating that the defeat of the ruling candidate in the November 3 bye-elections would not have any difference in the present PDA government, Chief Minister, Neiphiu Rio Tuesday said that their win would help the government provide a more stable and stronger government during this crucial stage of the Naga people.
Speaking during the NDPP rally for Medo Yhokha at Pfuchama Panchayat Hall under Southern Angami-I Assembly Constituency in Kohima district tonight, Rio said Nagas are passing through a crucial stage of Naga political talks which has entered into the 24th year.
In this he said that during his recent meeting with Union Home Minister Amit Shah along with officials from IB and Special Secretary Home, he was informed that all competencies on Naga political issues have been resolved while discussions are in progress to resolve the contentious issue of “separate flag and Yehzabo”.
While the present dispensation in the State has another two and half years to complete the term, anything can happen once a solution is attained, he said.
Rio also reiterated that the PDA government is serious on implementation of the delimitation process so that justice is delivered to the districts which need to have more seats against those which have more than they require.
The Chief Minister also asserted that in order to overcome the impact of the current COVID-19 pandemic, the state government is working hard on improving the economic condition of the State through focused agricultural activities.
All these require strong and stable government, he said while appealing the electorates to cast their vote in favour of the ruling candidate so that he will join the government and would work towards fulfillment of the aspirations of the people.
Medo is the official consensus candidate of the PDA, so cast your vote to strengthen the Party and government, Rio appealed.
Meanwhile, Rio lauded NDPP Kohima Region president Avio Tetso and former MLA Medokul Sophie for their decision to remain in the Party and support the official candidate Yhokha despite being denied the ticket.
Further, Rio also declared that Independent candidate Seyievilie Peter Zhashümo has been expelled and therefore the party would not accept him into the fold.
NDPP expels Peter Zashümo for six years
NDPP general secretary i/c Kohima Region, Prasilie Pieny? informed that five persons sought the Party ticket and all of them were good but Party was not in position to give ticket to all so it was decided to field Medo Yhokha.
While almost all stood by the Party leadership decision, Pienyü lamented that Seyievilie Peter Zash?mo went against and fielded his nomination as Independent candidate.
In this, he informed that the Party has decided to expel Peter for 6 six years from both primary and active membership of the Party with immediate effect for his anti-party activities.
As independent does not have any principle and policies, it is better to stand behind the ruling leadership and also strengthen the government by electing the NDPP candidate, he said.
Further, Pienyü while criticizing the false claims of the Independent Candidate that he would remain in the government if elected, said “even if he wins, he would not be allowed to join the PDA government, but will have to remain in opposition”.
Former MLA Medokul Sophie joins NDPP campaign
Former MLA & NDPP ticket seeker for the bye-election, Medokul Sophie speaking during the election campaign at Phesama tonight said due to the unfortunate demise of the sitting MLA late Vikho-o Yhoshü the bye-election was announced.
As one of the ticket seekers initially he was very disappointed at being denied the ticket, said Sophie, who joined the campaign only tonight at Phesama. He clarified that he understood the circumstance leading to the Party leadership granting the ticket to Yhokha.
“If elected he will work with Chief Minister Neiphiu Rio, who is the right leader for the Nagas,” he said, adding that even if Yhokha loses, the present government will complete its term.
Sophie went on to say that Nagaland needs a strong leadership and a stable government considering the ongoing Naga political issue nearing to final settlement and also implementation of delimitation process as well as the other developmental activities.
Therefore, “let us all unite and elect Yhokha to be the official representative of the constituency”, Sophie appealed.
PDA consensus candidate Medo Yhokha, Advisor for Urban Development and Municipal Affairs Dr Neikiesalie Nicky Kire, Advisor for School Education K T Sukhalu, Advisor Food and Civil Supplies Pukhayi, Advisor for Youth Resources and Sports Zale Neikha, Working Presidents Alemtemshi Jamir & Nyemnei Konyak and former MLA & chairman NKVIB Dr Neiphrezo Keditsu accompanied Rio during the campaign.` (Page News Service)