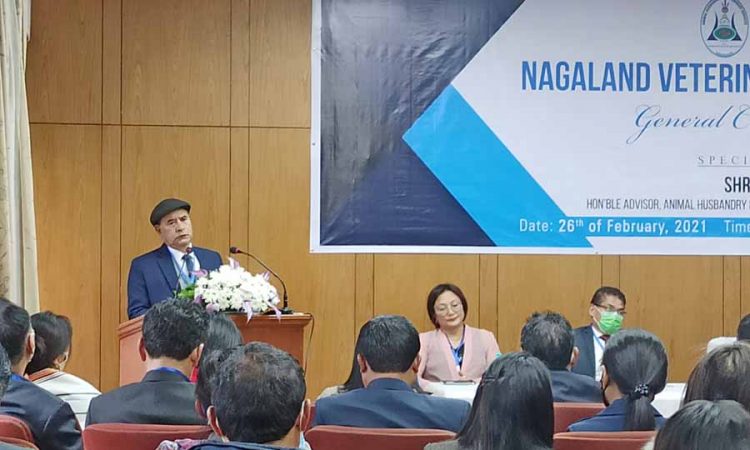 KOHIMA, FEBRUARY 26: The total requirement of meat in Nagaland is 66.7 thousand tonnes, where as the internal domestic product is 32.03 thousand tonnes which accounts for 48% against the total amount of meat required in the State, informed the Director of Animal Husbandry & Veterinary Services, Dr Budhi Lama at the general conference of Nagaland Veterinarians’ Association at Hotel Japfu on February 26.

Highlighting the acute shortage of meat production in the State, Lama said there is immense potential and scope for animal husbandry development but this is only possible if the Nagaland Veterinary Association and all the players play a pivotal role as a stakeholder and a pressure group to support the department to meet the growing demand of the people in achieving self-sufficiency in major livestock products.
He said that the Department of Animal Husbandry along with some agri and allied department like horticulture and forestry has been identified as the key player to improve the economy of the State.
Lama also mentioned about the good prospects that lies in the post-pandemic. He said the State Government is faced with the task of accommodating the many returnees who were working outside Nagaland. In this regard, animal husbandry programmes like piggery and poultry are some of the few projects where the returnees can be rehabilitated since the projects are short-term result oriented.
Advisor of A.H & V. S & Women Resources, R. Khing said that the need to propagate and rear livestock cattle in order to meet the requirement in the State has never been more pressing as it is now since the relationship between Nagas and animals has been of utmost importance from the past to present day.
He said that there are so many avenues and opportunities which the department can contribute towards the economy of the State.
NVA president, Dr. Elang expressed gratitude to his team of NVA office bearers who are continually working to safeguard the interest of their noble profession and upholding the dignity of all the professionals at large.

Secretary to the Government of Nagaland, Department of A.H & Veterinary Services, Khrupi Sothu (IAS) exhorted the gathering by saying that while everyone in the NVA is aware of its aims and objectives, it must be followed by introspection.
“We should ask ourselves whether we are doing our part or not,” stated Sothu.
(Page News Service)