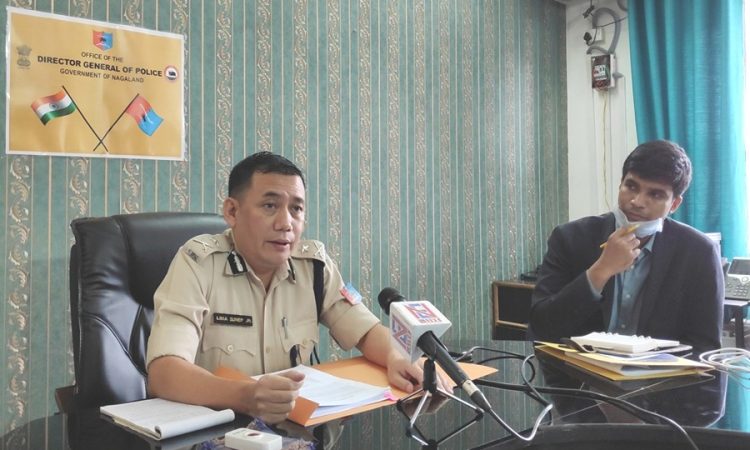 Kohima, June 26: After Governor, R N Ravi asked law enforcing agencies to pull up their socks and rein in armed gangs, Nagaland police today talked tough on armed extortionists.
Briefing media at Police Headquarters, Inspector General of Police (Range), Limasunep talked tough on armed extortionists, and assured of clamping down on such unlawful activities henceforth. Nevertheless he sought all stakeholders to come forward to curb the menace of extortion jointly.
He warned that anyone submitting, or submission to extortion and ransom will be tantamount to terror funding, and anti-national, and would invite national agencies to tackle the issue.
“As a matter of caution, it is pointed out that submission to such illegal demands by various UGs, notwithstanding any justification, could leave a trail of terror funding, offence against the State, abetment to criminal offence, and many other provisions of law as has happened in the past, invoking the attention of national investigating agency,” he said.
The IGP asked people to come forward and assist the cops to check the menace of extortion and anti-social activities. He said criminal justice system should be set in motion with the involvement of all stakeholders. He said the criminal justice system can be streamlined with the involvement of all sections of society.
On how criminals could jump the law of the land, which has often frustrated the police, he said there should be better coordination to streamline the system, and justice is delivered.
“With the phased wise relaxation of the lockdown, there are apprehension that it may lead to an increase in extortion activities by various underground factions and anti-social elements in the State,” the IGP said. But he assured people that police would continue to carry out mandated duty of anti-extortion drive relentlessly, irrespective of various underground groups and overground sympathizers, anti-social elements masquerading or taking the name of underground groups.
Limasunep said in the last one week alone, Kohima police have arrested six hardcore extortionists of various factions and another five were arrested from Dimapur, adding there was a joint operation carried out by Assam Rifles and Dimapur police Thursday night itself.
He said in the last five years, police, Assam Rifles and Security Forces had arrested several undergrounds. He said a total of 893 undergrounds and criminal cases have been registered and a total of 1,238 persons of various underground groups for involvement in various crimes like violation of Arms Act, Explosive Acts, murder, offence against the State, abduction, kidnapping for ransom, UA (P) Act, NSR, extortion and robbery have been arrested. The cases registered and arrested against the militant factions respectively are NSCN (IM): Case registered – 247; Persons arrested – 361; NSCN (U): Case registered – 197; Persons arrested – 267; NSCN (R): Case registered – 63; Persons arrested – 91; NSCN (YA): Case registered – 198; Persons arrested – 263; NSCN (Khango): Case registered – 10; Persons arrested – 10; NNC/FGN: Case registered – 148; Persons arrested – 187 and NE outfits: Case registered – 30; Persons arrested – 59.
There are over ten Naga outfits operating in the State.
“Out of the total cases registered against UG, the extortion related makes up the majority of the offences,” the police officer said.
In Dimapur alone, 507 cases have been registered against extortionists in the last five years and a total of 723 extortionists arrested. Kohima about 72 cases have been registered and 96 extortionists arrested.
Limasunep said in more than 95% of the cases relating to extortion, the criminal cases are registered “suo motu” by the police, which means there are no formal complaint lodged by the aggrieved party against the extortionist and it is because of the initiative and pro-activeness of the police and the security forces maximum of the extortion cases have been registered and arrest made. “It is at the heart of the criminal justice system that victims of crime/victims of extortions, do not find it a part of their duty and responsibility to file a formal complaint in a police station and share the facts and circumstances of crime,” he added. He said it encourages and emboldens the criminals when the victims became pliant and compliant and submits to such illegal demands without reporting the matter to the people.
The IGP further said it was to the credit of police that there has been no “burking of crime” under reporting of cases or non registration of cases. He said police stations are prompt to take cognizance of any complaint that comes, and there are enough supervisory officers to ensure that action is taken. “The police department would like to appeal to one and all to be more forthcoming with criminal complaints and to take it upon as a duty and responsibility to come forward and assist the police in tackling the menace of extortion,” he said.
He said police researches have shown that it is not possible to prevent and detect crime without community and citizens’ support the world over, and that it is only the basis of active, participative and responsible community and citizenry, crime can be prioritized and rooted out from society.
Recently in a letter to Chief Minister, Neiphiu Rio, the Governor has taken strong exception to the ongoing extortion by “armed gangs” and State Government’s inability to rein on them, and threatened to evoke Article 371A (1) (b) of the Constitution of India.
(Page News Service)