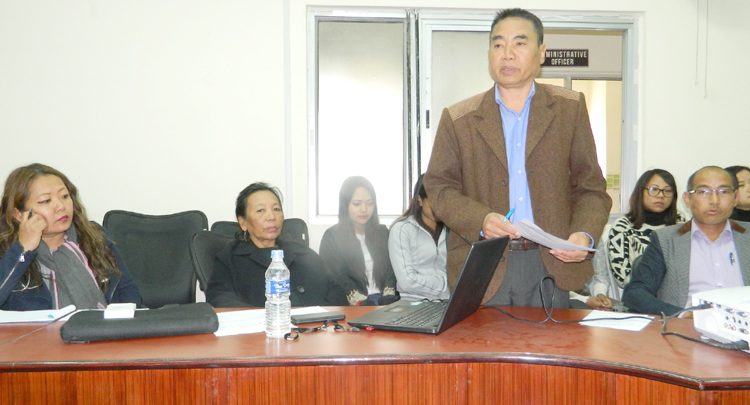 Kohima, February 4: With Nagaland among the highest number of cancer patients State in the country, a clarion call was made toward spreading awareness among the general populace which can lead to early detection and proper treatment of the dreaded disease.
The call was made during the observation of World Cancer Day on the theme “I am, Will” organized by Department of Health and Family Welfare at Naga Hospital Authority Kohima (NHAK) here under the aegis of Population Based Cancer Registry, Nagaland.
“Proper awareness of the disease will lead to early detection and early detection will lead to proper and complete treatment of the dreaded disease,” said Managing Director of NHAK, Dr Thorhusie Katiry.
Stating that cancer has become a common non-communicable disease, he said timely diagnosis and treatment can cure cancer.
In this, he said that the menace of the dreaded disease has to be controlled and the responsibility should be taken up by the medical and media fraternity to spread awareness so that people will come forward for proper health care.
Principal Investigator PBCR, Dr Vinostole Khamo said many patients consider cancer as a death sentence and they tend to avoid proper treatment at an early stage and that is the reason around 26000 patients die of cancer around the world every day.
Cancer was believed to be not treatable two decades back, but today medical science has come up with new inventions and many researches are going on daily basis, she said.
If detected on time it can be healed completely, she said while stating that cancer is divided into 4 stages based on the size of the tumour. In the first and second stages, it can be treated while in the third stage, the life of the patient can be extended but in the fourth stage, it becomes difficult to deal with the patient, she said.
Stating that the prime cause of cancer is mostly by tobacco products including gutkha, pan, smoking etc., she appealed people from avoiding consumption of tobacco products to lead a healthy life.
Dr Lalkrawsthangi Khalo chaired the programme while swelcome song was presented by student nurses of School of Nursing NHAK and Dr Zuchamo Patton tendered the vote of thanks. (Page News Service)