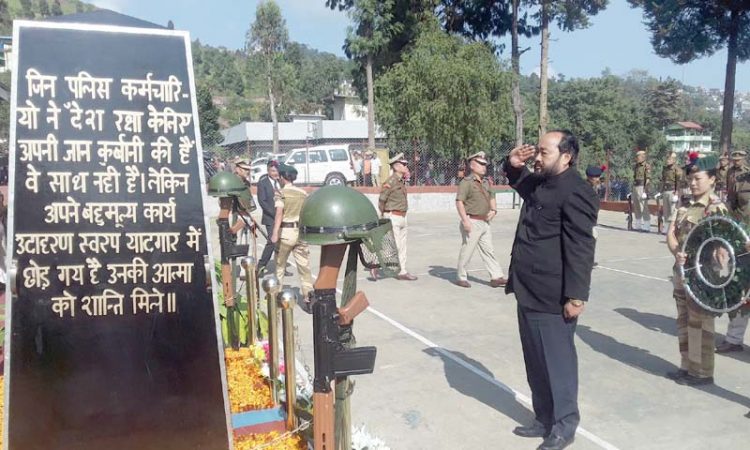 Kohima, October 21: Nagaland today joined the nation in observing Police Commemoration Day by remembering the supreme sacrifice made by the police and security forces in the defence of the nation.
State’s Deputy Chief Minister in-charge of Home and National Highways, Y Patton and Director General of Police, T John Longkumer led the rank and file of police personnel and different forces of the in laying wreath.
On the occasion the names of the 424 personnel who laid their lives in the defence of the nation from September 1, 2017 to August 31, 2018 were also read out while rich floral tribute was paid for their supreme sacrifice throughout the country at the memorial erected at Police New Reserve, Phesama here.
DGP Nagaland, Longkumer highlighting on the significance of the day said “police commemoration day is observed on October 21 every year to mark the martyrdom of policemen killed in Ladakh in 1959 and to pay tribute to all other police personnel killed on duty during the year.
DGP narrated that on October 21, 1959, when a patrol CRPF, led by DCIO Karam Singh, was ambushed by the Chinese forces at Hot springs Ladakh and 10 jawans were killed.
The annual conference of Inspectors General of Police of States and Union Territories held in January 1960 decided that October 21 would be observed as Commemoration Day in all police lines throughout the country to mark the memory of the gallant men who were killed in Lakdah and all other police personnel killed on duty during the year. (Page News Service)