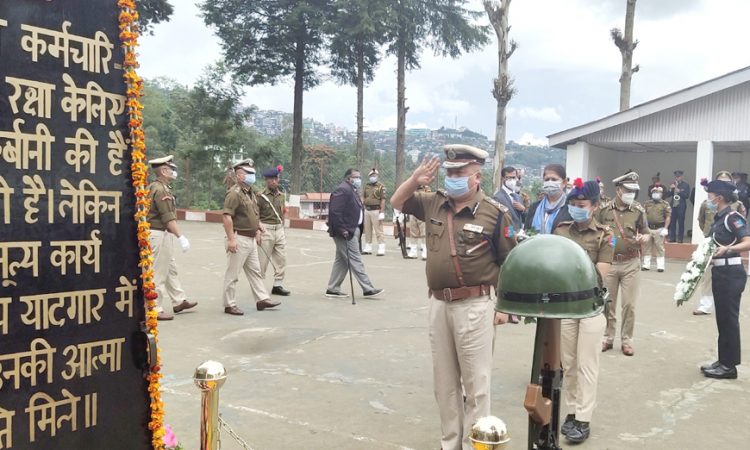 Kohima, October 21: Nagaland today joined the Nation in observing Police Commemoration Day by not only remembering the martyrs for their supreme sacrifice but also those personnel who succumbed to the invisible enemy – the COVID-19 virus.
The commemoration was held at New Police Reserve here, wherein DGP Nagaland T John Longkumer along with other rank and files of State police, CRPF, SIB and others paid floral tributes at the epitaph holding the names of the 265 martys who sacrificed their live in the defence of the Nation during the last one year.
In his address, the DGP said, “We gather here today to pay homage to supreme sacrifices of Policemen all over India – A sacrifice aimed at securing a better tomorrow for all others”.
“On this day we remember the sacrifice of not only those killed in Ladakh on October 21, 1959 where a CRPF Mobile Patrolling Party led by DCIO Karam Singh was ambushed in Aksai – Chin area of Ladakh but of all other Policemen killed in the line of duty,” he said
Records State that since 1947, over 35,000 Policemen has e sacrificed their lives in the line of duty, he said.
Police plays a crucial role in the development of a nation, he said, adding that they do this by maintaining law and order, by foiling the nefarious ploys of insurgents and anti-socials and as witnessed during the pandemic by helping the needy and ensuring smooth flow of essential services to the people.
Maintaining that Nagaland Police Officers and men have also made such supreme sacrifices and the State also lost many precious lives both within the Home State and in states like Chhattisgarh and West Bengal, he said.
“We pay our respects to these brave and valiant Police personnel who sacrificed their valuable lives to protect the Integrity and Security of the country,” he said.
The DGP also mentioned about the policemen who succumbed to the invisible enemy – the COVID-19 virus, while fighting on the frontlines regulating crowds and enforcing lockdown.
Quoting Bureau of Police Research and Development sources, he said over 1.35 lakh policemen all over India have tested COVID positive and 802 have lost their lives.
“We mourn the loss, we share the pain of their near and dear ones,” he said while maintaining “But, we also take pride in the valour shown by them and are inspired by their selfless dedication of protecting others”.
Today is not only a day of mourning but a day when we remember the spirit of selfless sacrifice shown by the martyrs and renew our pledge to serve our people to secure and maintain the integrity of our nation, said Longkumer.
“We gather here today to pay homage to supreme sacrifices of Policemen all over India. A sacrifice aimed at securing a better tomorrow for all others,” he said.
Meanwhile, the Nagaland DGP said the Government of India in recognition of the contribution of the force has declared the period October 21 to 31 to be celebrated as Police Flag Day, of which this year is the first edition.
Along with rest of the Country, Nagaland Police is also organizing events to mark the occasion while the Commemoration Parade is the first of such events, he added.
Dimapur: Joining the rest of the country, Police Commissionerate Dimapur observed the 59th Police Commemoration Day on Wednesday at Commissioner Police office honouring the victory of policemen who sacrificed their lives enabling all to live peacefully.
Speaking on the occasion, Commissioner Police Dimapur, Rothihu Tetseo IPS informed that around 35,600 policemen and women have laid down their lives while safeguarding the nation and security of the citizens from 1947 till date. “Among them one of our brave Lt. UBC Thiubuibo Zeliang who was in SOT laid down his life on 14th July 2014 during the operation. Today we honour him and acknowledge his supreme sacrifice,” CP Dimapur said.
On behalf of the personnel of Police Commissionerate Dimapur, Rothihu handed over cash incentive to the wife of Unit martyr, Lt.Thiubuibo Zeliang who was present on the occasion with her daughter.
Commemorating the day, CP Dimapur received the general salute, read out the Roll of Honour, thereafter the Nishan commander placed the Roll of Honour on the Cenotaph. A 2 minutes silence, Samarak ko Salami was observed, reveille played and salute was given by all present. This was followed by laying of wreaths by family of Unit martyr, followed by CP Dimapur and other officers/ police stations.
Assistant Pastor, PBC DImapur read scripture passages and invoked God’s blessings.
177 Bn CRPF: The 173 Battalion CRPF, Headquater at Airfield, Dimapur observed Police Commemoration Day on October 21.
Vishnu Gautam, Commandant 173 Bn CRPF recalled the valour of courageous police personnel who have sacrificed their lives in the line of duty. He recalled the supreme sacrifices by CRPF men while defending the borders with China on 21st October 1959 against Chinese Army aggression at Hot Springs in Ladakh where a small CRPF patrol party was ambushed and heavily outnumbered by the Chinese army. In the ensuring battle 10 CRPF men made supreme sacrifice in the line of duty.
In order to commemorate the exceptional act of valour by the men of CRPF, 21st October is observed as ‘Police Commemoration Day’ across the country. He also encouraged that every force personnel should inculcate and follow their acts of bravery so that they can inspire future generations.
The programme was attended by all ranks and files of the unit. (Page News Service) 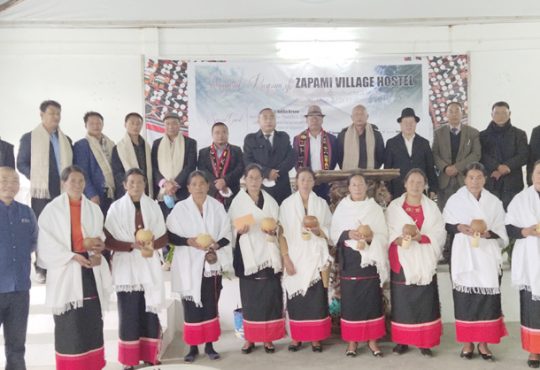