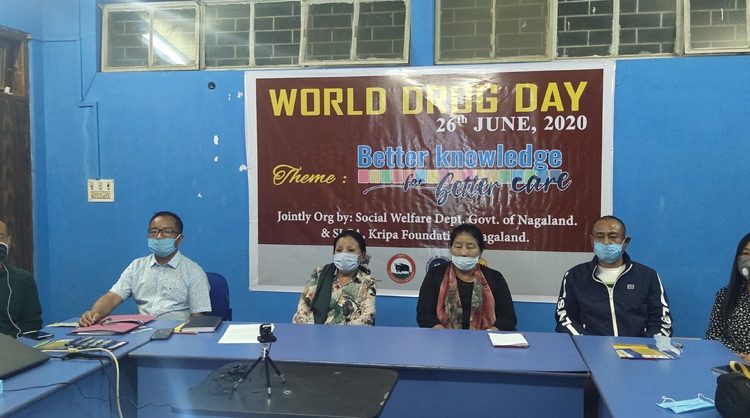 Calls for review of Substance Abuse Prevention and Treatment Policy 2016

Kohima, June 26: Nagaland today joined the world in the virtual observance of International Day against Drug Abuse and Illicit Trafficking on the theme “Better knowledge for better care” with a call to review Nagaland State Substance Abuse Prevention and Treatment Policy 2016.
The state level event with Nagaland Commissioner and Secretary for Social Welfare Department, Sarah R Ritse as the guest speaker was organized by the Social Welfare Department in collaboration with Kripa Foundation via video conference in the State capital and joined by all the 11 districts and also some Arunachal Pradesh.
In her address, Ritse called upon all to share the burden of highlighting the danger of substance abuse and its threat to erode the social fabric of our society.
“We must rise to the occasion and seize every opportunity to spread awareness amongst the most vulnerable section and create sense of responsibility into the masses, and encourage them to create awareness and bring sense of understanding of the menace and threat posed by substance abuse and illicit trafficking particularly among the youth in the society,” she said.
“We must strive to disseminate information at all levels with whatever resources available at our disposal,” appealed Ritse.
She said Nagaland state being located in a very vulnerable geographical location, having access to all sorts of drugs or substances trafficked from across the domestic and international borders, requires our collective efforts to fight against the substance abuse and illicit trafficking.
Expressing sadness that substance abuse is prevalent among school and college going students, she called upon parents, families, institutions, faith-based organizations, community, NGOs and government departments to collectively address this problem through various tools and mechanisms to ensure substance abuse-free society.
She said that in order to strengthen the fight against drug abuse and illicit trafficking, the State government has adopted The Nagaland State Substance Abuse Prevention and Treatment Policy 2016.
Nonetheless, she said that the policy needs a relook and the matter would be taken up in due course of time to make it a more effective and achievable policy.
She also informed that three districts of Nagaland – Mon, Kohima and Dimapur have been included in the annual plan 2020-21 under Nasha Mukt Bharat by the Ministry of Social Justice and Empowerment.
She expressed hope that such intervention will go a long way in prevention and mitigation of substance abuse in our State.
Marking the occasion, Ritse also launched State Multi Media Campaign and Substance Abuse Helpline numbers – 9862160447 & 9089273154.
Director of Kripa Foundation, Abou Mere said substance use and abuse is not just an individual’s problem but involves a wide spectrum of socio-economic, socio-political and human rights issues.
Substance use and abuse can happen to anyone, including our own family members, he said.
Lauding that Nagaland was one of the few states in the country to develop its own drug policy in 2016, he however said before the policy is implemented, it needs to be revisited and adapted to the current situation.
It would also need to consider the emerging policies and guidelines issued by various central ministries, he said while appealing the State Government to review the policy taking into account the findings from recent studies such as the National Survey on Extent and Pattern of Substance Use in India conducted by the Ministry of Social Justice and Empowerment (MoSJE).
The process should also incorporate updated policies issued by the MoSJE and MoHFW as well and other scientific evidence program for prevention and treatment, Mere said while adding that it should provide the much-needed guidance to address drugs and alcohol as a public health and human rights issue, and provide appropriate budget allocation for implementation.
During the discussion hour, participants over video conferencing suggested strengthening coordination between the social welfare department and NGOs working in the field, opening of rehabilitation centres in all the district and creating awareness on primary prevention in schools and colleges.
The programme was chaired by Social Welfare Assistant Director K Wango Langsym while Director K. Atoli Sema delivered the welcome address. (Page News Service) 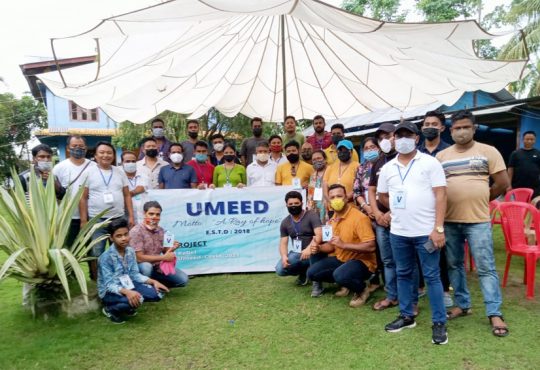 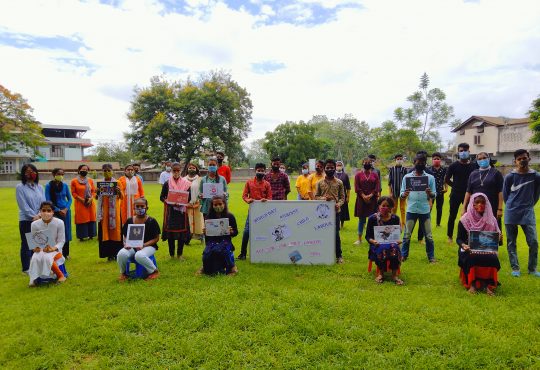