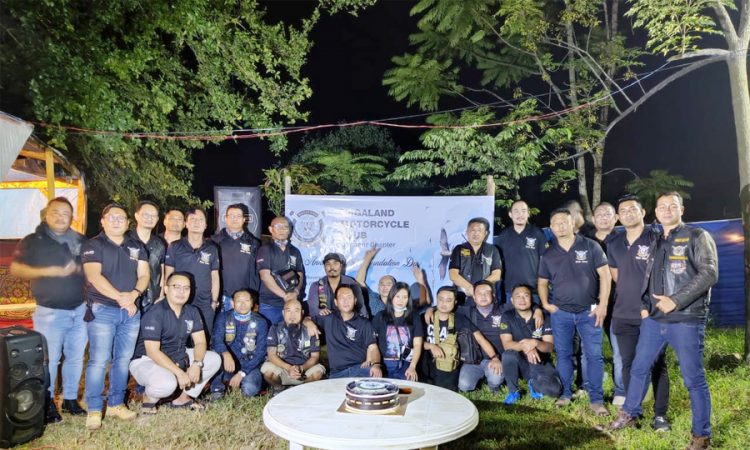 DIMAPUR, NOVEMBER 7: This year, due to the pandemic and the subsequent SOPs, Nagaland Motorcycle Club (NMC) celebrated its 10th Foundation Day on a somber note. While it is customary for all the 3 chapters of the NMC ~Dimapur, Kohima and Tuensang~ to gather and ride together, this year all chapters are commemorating the day in their own districts.

Nagaland Motorcycle Club was founded on November 7, 2010 by a handful of Royal Enfield enthusiasts whose passion for biking and adventure brought them together and today there are more than 80 members. The members go by the name “Naga Chiefs” and ride under the banner “One Machine, One Road, One Mind”. Coming from all walks of life, the Naga Chiefs believe in the spirit of brotherhood and hope that soon, each district in Nagaland would start its own chapter and ride under the banner of the NMC.

When asked by Nagaland Page what being part of NMC means to them, Senior Member Chief Danny Sangma (Dimapur Chapter) says, “NMC is like a family, the oneness and support for each other during good times and bad have created a bond which is more like a family than a club.”
General Secretary, Tuensang Chapter, Chief Chollen says, “NMC is a big fat motorcycle family, together, we not only ride hard but we look after each other like family.”
In its small gathering to commemorate the milestone at Kohima, Chief Zhatuo Rutsa, President NMC Kohima Chapter, expressed regret at being unable to ride together due to the pandemic but is hopeful for better days.
For Dimapur Chapter Chief, Imo Sanen Jamir, the 10th anniversary of the Foundation Day is not only a day of celebration but a day to reflect on the responsibilities and the role of the NMC in the society. The NMC does its part in raising awareness on road safety issues, working closely with the Traffic Police and for women’s safety issues. It is also involved in charity works for underprivileged children and holds regular awareness rides. Central Chief and Chairman of North East Alliance of Riders (NEAR), Kevin Naga says that the NMC helps in promoting tourism by hosting events such as the Hornbill Riders Meet, in collaboration with the Department of Tourism, Nagaland, as a part of the Hornbill Festival where riders from all over the country and beyond gather to experience the culture of Nagaland. This year, the NMC was to host the North East Riders Meet (NERM) in Nagaland but due to the pandemic, it has been postponed. The NMC and its members also take part in events hosted by other motorcycle clubs in and around the country where they represent and promote Nagaland.

“Though the general perception is that bikers are a rowdy lot, we try to do our best to help in promoting Nagaland in terms of tourism and by giving back to society by doing charity works and raising awareness on certain issues.” he says.
(Page News Service)