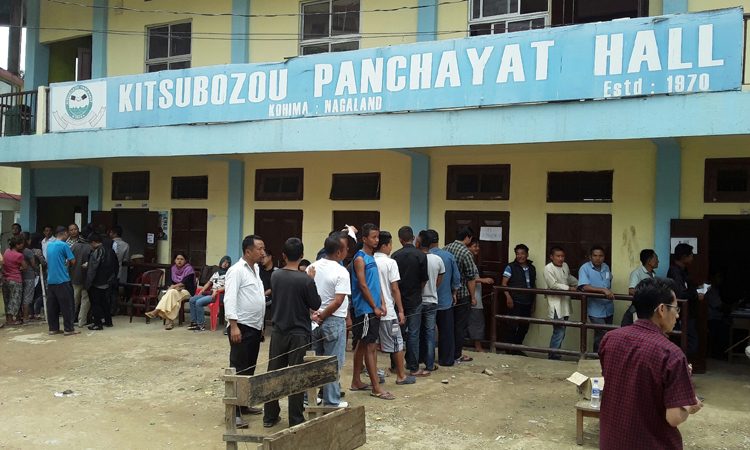 Kohima, May 28: At least seven persons were arrested for damaging an EVM in today’s bye-poll for the lone Lok Sabha seat in Nagaland, which showed an estimated 75% voters, out of the 11,97,436, turning up to exercise their franchise.
Briefing media-persons at his official chamber this evening, Returning Officer for the bye-poll, M Patton said that barring one incident of EVM damage and complaints from political parties demanding re-poll in 17 polling stations, the overall polling was peaceful with a projected voting percentage of 75% at the time of closing at 4PM.
He said that the figure is only projected as several polling stations, especially in the interior areas were inaccessible by communication due to network problem. The final poll percentage will be known only after the polling officials reach the Assistant Returning Officer offices in the respective district headquarters, he said.
The Lok Sabha polls in 2014 witnessed a total turn-out of 88.25% electorates.
Tokheho Yepthomi is the consensus candidate of the ruling People’s Democratic Alliance (PDA), which has Nationalist Democratic Progressive Party (NDPP) NDPP and BJP as it major constituents. Opposition Naga People’s Front (NPF) has C Apok Jamir, while Congress has also extended to him.
Patton said that in Kubza Polling Station No. 13 under Aonglenden Assembly Constituency in Mokokchung district, a mob entered the booth and damaged the EVM machine while the Deputy Commission has officially recommended for re-poll. Police has arrested seven persons in this connection, he said.
At the time of incident at around 1:10PM, around 70-80 people came to the polling station and forcefully smashed the ballot unit and control unit. However, the VVPAT is reportedly intact, he said.
“85% votes were casted and no votes were polled further,” reported the DC and ARO Mokokchung, Sachine Jaiswal in his report.
The RO also revealed that political parties have filed complaints demanding re-poll in 17 polling stations under Meluri sub-division under Phek district and one Polling station in Kohima.
NPF has filed complaint against ruling NDPP for restricting NPF supporters to exercise their franchise in 10 villages by NDPP supporters. The villages include Meluri Christian Khel A, Meluri Christian Khel B, Meluri Non-Christian Khel, Rieteupe, Meluri Town A Wing, Meluri Town B Wing, Meluri Town C Wing, Meluri Town D Wing, Khumiasu and Lephori village.
BJP has demanded re-poll in 6 villages complaining that NDPP supporters were restricted from casting their votes by NPF workers. They are – Mollen, Hutsu, Yesi, Kuzatu, Shatuza and Setisotha villages.
In Kohima, NPF demanded re-poll in PS No 38 in Lerie colony with the complaint that its supporters were not allowed to cast vote without voter’s slip inspite of producing other relevant documents approved by Election Commission, he said.
He said that though there have been unconfirmed reports of proxy voting but no complaints were received.
Patton informed that scrutiny of the records of the polling officers on today’s poll procedure would be conducted tomorrow at 11AM and only after proper verification repoll the ECI will decide on repoll.
Re-poll, if any will be held on May 30, he said adding that the counting of votes would be done on May 31 in 13 centres across the State.
Chief Minister Neiphiu Rio along with his wife and children casted vote at his native village in Touphema Basa, around 35 km from the state capital, NDPP sources said.
Opposition Leader T R Zeliang also voted along with his wife at Jalukie Town in Peren district.
Voting began at 7 AM and ended at 4 PM in 1887 polling stations, while it was closed an hour ahead in 309 booths, the RO said. “In 309 booths, set up in interior places with barely any transportation facilities, the polling ended at 3 PM for the convenience of the election officials to return to the district headquarters,” he said.
Altogether, 40 companies of Central Armed Police Forces along with 80 companies of Nagaland Armed Police, 770 Home Guards and 2600 village guards were deployed across the state to ensure free and fair polls, CEO Abhijit Sinha informed.
The bye-poll was necessitated after Rio resigned as a Lok Sabha member in February to contest the assembly polls on NDPP ticket. He is presently the Chief Minister for the fourth time. (Page News Service)