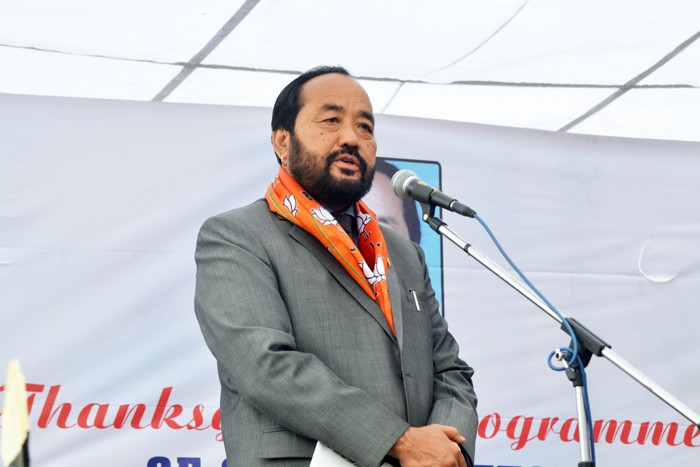 Kohima, February 20: The Nagaland Lokayukta on Thursday asked State Chief Minister Neiphiu Rio to inquire into allegations of his Deputy Chief Minister Y Patton’s involvement in the appointment of over 1100 constables in the Police Department without following norms.
This was stated in an order signed by Nagaland Lokayukta Justice Uma Nath Singh while taking cognizance of a complaint filed Vicca S Aye, an educated unemployed youth of the State.
Aye had filed a petition in the Lokayukta against the State Deputy Chief Minister Y Patton against his alleged involvement in the appointment of constables in the Police Department.
The petitioner, Vicca S Aye on Thursday confirmed that he filed case against Patton, who is in-charge of Home Department, on Wednesday.
In his complaint letter, Aye accused Patton of proposing and offering to aspiring candidates who qualify the Nagaland Public Service Commission (NPSC) written examination to approach him for help at the interview stage.
He also charged that Patton while serving as the Minister for Home Department during the past 7 years had involved in rampant abuse of administrative discretion and favouritism interfering the normal administrative functioning of the Police Department.
The complainant also pointed out that Patton had made 1135 appointments in the Police Department without advertising the said post.
Patton had been the Home Minister of Nagaland during the Naga People’s Front (NPF) regime from 2013-18. He bunked NPF just before the 2018 state elections and joined the BJP, which contested the State elections in alliance with Nationalist Democratic Progressive Party (NDPP). He was appointed as the Deputy Chief Minister in March 2018 and continues to hold the charge of Home Department, along with other departments.
Meanwhile, the Nagaland Lokayukta in its order directed the Coordinating Officer/Inspector under Nagaland Lokayukta Police Establishment to register a case of Preliminary Inquiry to be conducted by the higher authority – that is the Chief Minister of Nagaland.
The Lokayukta order, made available by the complainant Aye, stated that the Chief Minister shall submit his report on affidavit before the next date of hearing.
The Lokayukta has also directed the Deputy Chief Minister Y Patton to file his reply on affidavit to the allegations in the complaint.
It has also directed the Nagaland Police, in particular the Commissioner of Police Dimapur, to ensure the protection of the complainant who comes in the category of “Whistle Blower”, failing which necessary legal consequence would follow against the authority responsible for such protection.
The Lokayukta has listed the next hearing with reports and affidavits on April 4, 2020.
Meanwhile, Aye while reacting to the Deputy CM’s statement in the just conclude Budget Session of the State Assembly that the recruitments were made by the respective District Superintendents of Police (SPs) and Commandants of the police battalions, said he has also filed an RTI on Tuesday seeking proper information on the matter.
(Page News Service)

“Consequences will be borne by Australia”: China after steps on Hong Kong