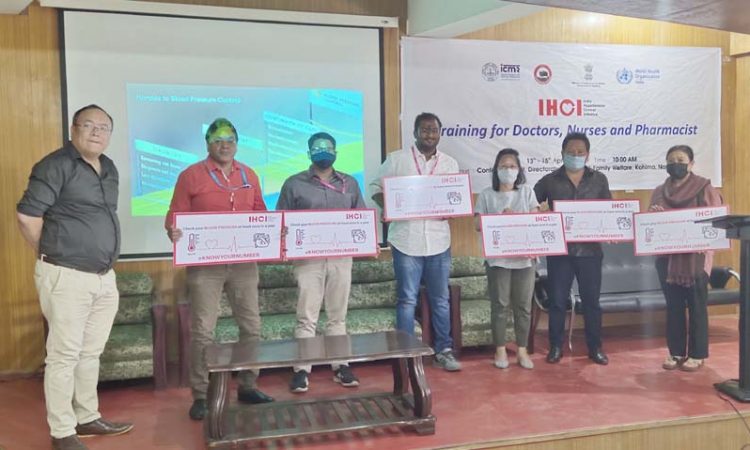 The official launching event was held at the Directorate of Health and Family Welfare here today.
IHCI was launched by the Central government in November 2017 in 25 selected districts of Punjab, Madhya Pradesh, Kerala, Telangana, and Maharashtra.
It is a five-year initiative which aims to accelerate India’s efforts to check non-communicable disease (NCD) targets by strengthening hypertension management and control using evidence-based strategies.
In August 2019, it was expanded to 100 districts covering all the states.
Uncontrolled high blood pressure or hypertension is the most common reason for sudden heart attack and is a leading cause of death in the country, said Consultant ICMR-NIE Chennai, Dr Mohamed Azarudeen while giving an overview of IHCI program during the launching event.
He said through adoption of hypertension protocol would require implementation of practical treatment protocols which are standardized and evidence-based, drug and dose specific, establish steps if blood pressure is not controlled, and reduce clinical variability.
It would also ensure that the right medications and equipment get to the right place at the right time and reach the patients who need them, he said.
Medical Officer of State NCD Cell, Dr Ebenezer Phesao making a presentation on National Programme for prevention & Control of Cancer, Diabetes, Cardiovascular Diseases & Stroke (NPCDCS) in Nagaland said there are one each NCD Clinic in 11 districts while out of the target 21 NCD clinic for 21 Community Health Centres 10 have been established – Bhandari, Pungro, Jalukie, Medziphema, Noklak, Tuli, Tobu, Aghunato, Tseminyu and Meluri.
Dr Phesao also informed that out of the 78,780 patients screened from April 2017 to March 2020 for NCD in the State, 29,936 were diagnosed with Hypertension (38% prevalence rate) and 3,939 diagnosed with diabetes (58% prevalence rate).
In 2019-20 of the 53,836 screened, 6756 had hypertension, 2268 diabetes and 693 cardiovascular disease (CVD), while in 2020-21 (till February), 27708 were screened with 3755 diagnosed hypertension, 1610 diabetes and 50 CVD, he said.
The total number of persons enrolled in the tablet as of April 11, 2021 is 36,417, he said.