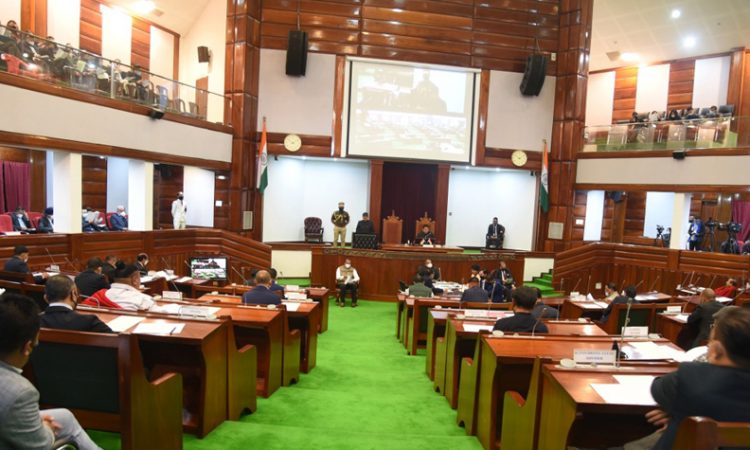 In a letter to the State Chief Minister on June 16, 2020, the Governor had termed the law and order situation in the State as “precarious” and also warned of promulgating Article 371A(1)(b) of the Constitution, which gives the Nagaland Governor special responsibility with respect to law and order, if things did not improve.
But on Friday he told the State Legislative Assembly: “The general law and order situation in the State has remained largely peaceful. There have been some localised incidents which were contained with swiftness by the district administration and police.”
In order to tackle the menace of extortion and curb instances of illegal taxation, he said Nagaland Police has set up Anti-Extortion Cells in all the districts, which work in close coordination with other law enforcement and security agencies to contain illegal activities.
To enhance fighting crime against woman, the Governor said a Woman Police Station at Kiphire was established thus covering 11 districts. “We plan to establish one in the newly created Noklak district soon,” he said.
In order to improve technical capacities to fight cyber crime, a Cyber Crime Prevention against Women and Children Lab cum Training Centre (CCPWC) has been made operational, he informed. Ravi said cyber cells to investigate cyber-crime have also been set up in all the districts.
‘One Solution’
On Naga peace process, the Governor said the negotiations going on between the Government of India and the Naga Groups over the past many years have concluded. He said there is now a need for efforts to build on the substantial gains made so far, and to move swiftly for the final solution.
“My Government on the 15th October 2020 convened a historic consultative meeting at Kohima with all the Tribal Hohos, civil society organizations, political parties and representatives of various other sections of the society on the Naga Political Issue. There were detailed discussions and it was reiterated that there will be only one solution for the Naga Political Issue. A seven point unanimous resolution was also adopted,” he said.
Taking another step towards further facilitating the peace process, Ravi said on 18th December last year, a joint statement was issued by Chief Minister, Neiphiu Rio and Leader of the Opposition, TR Zeliang welcoming the positive approach of the Government of India towards expediting the ongoing peace talks, and urged all the Naga Groups to come together under the spirit of reconciliation, mutual trust and understanding, and strive with sincerity. The statement also urged Naga organizations to uphold the values of reconciliation and non-violence in the interests of the future of the Naga people.
‘Health Infra’
Ravi said at the start of the COVID-19 pandemic, Nagaland did not have a single testing lab of its own for COVID-19. But the Government lost no time in planning and establishing testing facilities for COVID-19.
“We have now 3 BSL labs and over a period of time we have acquired 32 True Nat machines. Capacities were also enhanced by private healthcare providers who walked hand in hand in the fight against COVID 19. The Government also took steps to increase the number of health professionals and workers in public health facilities. 134 posts of doctors, 221 posts of nurses, 23 posts of Technicians and 12 posts for the BSL Labs were created,” he said.
He said the overall health infrastructure of the State also saw a significant uplift. District hospitals not having functional ICUs were provided with requisite infrastructure and equipment. Also to modernize the supply chain management supported by a robust IT platform, the Department set up a State Warehouse at Kohima. The Department is also setting up medical oxygen generation plants in 10 district hospitals and CHC Jalukie with a total generation capacity of 1680 litre per minute. This will reduce dependency on pre-filled oxygen cylinders and ensure ready availability of bedside oxygen for patients, he told the Assembly.
‘Economic Roadmap’
The Governor said the onset of the COVID-19 pandemic, the lockdown, and the economic disruption that followed, brought out starkly the vulnerability of the State in terms of food sufficiency. Further the lockdown led to massive layoffs and many people who were employed outside and were forced to return. He said with a view to devise responses to these economic challenges, a Strategic Committee for Economic Affairs headed by Chief Minister was constituted and subsequently a Core Group consisting of experts and other stake holders was formed to work out strategies and plans to strengthen the State’s economy. The Core Group after extensive deliberations has formulated an economic road map with an integrated Convergence Action Plan to revitalize the economy.
Special focus is being given to sectors like up-gradation of facilities in health care, education, youth resources and sports. Re-skilling and gainful employment for the youth is also being given major focus.
Ravi said the Department of Employment, Skill Development & Entrepreneurship has, towards this end, developed and launched Nagaland Job Links Portal to help connect job seekers and employers for placement in the private sector. The Department also introduced Mobile Skill Morung to ensure access to skill development for rural youth and women. The Department has also rolled out the Multi Skilled handyman programme to ensure that every trainee is skilled in 3 or 4 job roles to earn their livelihood.

The Investment and Development Authority of Nagaland (IDAN) also developed and launched an e-commerce platform namely ‘Yellow Chain’ which empowers the traders by providing them an opportunity to carry on with their online, he said.
Ravi further said the onset of the COVID-19 pandemic and the lockdown imposed subsequently severely affected many economic activities, which directly affected revenue generation and receipt. “Against the budgeted State’s Share of Union Taxes and Duties of Rs. 4,493.37 crores reflected in the Union Budget and incorporated into State Budget, it is now estimated at Rs. 3,151.38 crores only. In addition, the State’s own revenues have also been adversely affected. Sensing the huge impending revenue shortfall both at the Centre and in the State, my Government has taken measures to reduce expenditure by effecting a 15% pro-rata cut of various expenditure items both under Non-Development and Development Outlay,” he said.
He said in the line of the Central Government, the State has frozen three installments of Dearness Allowance and Dearness Relief. Added to these, my Government has also put a total ban on new appointments and purchase of vehicles. The above measures were taken so that precious resources are saved to combat the Covid-19 pandemic as well as to mitigate the negative impact of the pandemic on the State’s finances, he said.
The Governor also highlighted various programmes and schemes initiated by the Government.
Advisor Namri Nchang moved the motion of thanks on the Governor’s address and Advisor Haiying seconded the motion. (Page News Service)