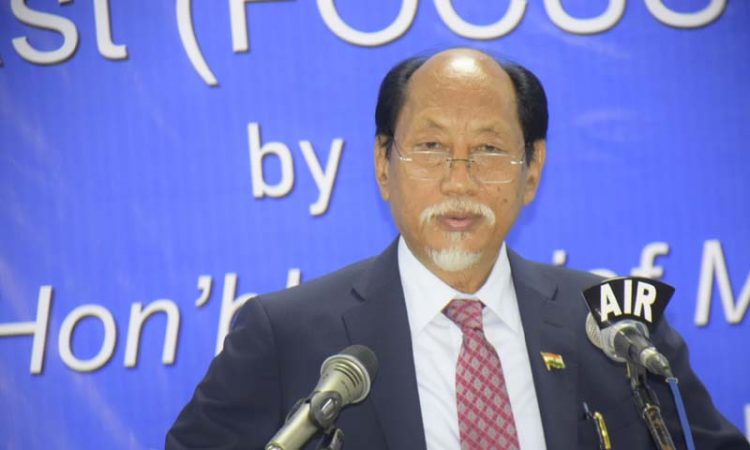 Dimapur, January 19: Chief Minister Neiphiu Rio Saturday lamented that Nagaland is unable to utilize its natural resources as a result of which the State continues to remain poor.
Nagaland like other North Eastern states is rich but chooses to remain poor because the natural resources that the State has cannot be utilized, he said.
Speaking at the launching programme of ‘Fostering Climate Resilient Highland Farming System in the Northeast, FOCUS’ as chief patron here at Hotel Saramati, the chief minister divulged that one of the biggest fear he face is people asking him about the economy of the State and he has to answer that Nagaland is a ‘consumer state’ as it produces nothing significant.
Rio said though 70% of the people are involved in agriculture, it doesn’t contribute much and truckloads of products reach the State daily and go out empty.
The CM, however, noted that fertile land is still the strength of the State where anything can be produced. What is needed is marketing chain, he said.
Appreciating IFAD for funding the project and terming the international financial institution as ‘God-sent’, he said this is the first time that the State is receiving an externally aided project and urged the stakeholders and policymakers to come together to make it a success and win the trust of the institution so that Nagaland can be trusted again if after the end of the project term there is more need of such initiatives.
“Without trust, there is no business,” he reminded. He assured the IFAD team and others present that release of timely funds from the side of the State Government will not be an issue and the Government will do all it can as farmers are its ‘top priority’.
Rio said that farmers of the State are able and all they require is guidance and assistance and with the incorporation of scientific knowledge in the traditional practices, the farmers will reap dividends in the days to co. He expressed that the existence of different programmes often confuses people and there is a need to cluster the programmes.
The CM also maintained that though Nagaland has been declared a ‘disturbed area’ and AFSPA is still in place, there has been peace since the ceasefire agreements were signed and people now want harmony and development.
Earlier representing IFAD, Rasha Omar said it is the first project that IFAD finances where jhum management is addressed in a holistic manner and covering two states – Nagaland and Mizoram. In Nagaland it will intervene in 650 villages in the eight districts of Mon, Longleng, Zunheboto, Wokha, Kiphire, Phek, Mokokchung and Kohima and it plans to reach 1,37,000 households.
She mentioned that the project will be intervening to improve the productivity across the farming system and this should enable the reached households to double their incomes by the end of the six years project. Further, due to the amalgamation of technology and traditions in the farming, farmers will be able to adapt to increase in temperatures estimated at 1.8 degrees Celsius over the average of the last 40 years and increase in rainfall by 10% to 20% combined with higher intensity rainfall and longer dry spells.
She clarified that IFAD is only contributing 46% of the total project cost and the success of the project depends on the “excellent collaboration among line departments and convergence with the centrally sponsored schemes of the agri and allied sector as well as with the schemes of the Rural Development Department in particular MGNREGA.”
In his keynote address, G. Kaito Aye, Minister of Agriculture, said that the IFAD funded project will boost the agricultural economy of the State, especially so where FOCUS is focusing on improving jhum.
“It is hoped that farmers will have a paradigm shift from subsistence agriculture to market economy and they will increase their purchasing power,” he said.
The duration of the project is set from 2018 to 2023 and the total cost of the project is Rs 612.42 crore of which IFAD will loan out Rs 273.70 crore besides a grant of about Rs 4 crore. The nodal agency of the project is DEA, Ministry of Finance. The additional funds would be procured from salaries and allowances of project implementation team, district team members and field staffs, CSS of agri and allied sector departments, MGNREGA, RKVY, MOVCDNER, AH&VS, etc.
The financing agreement between IFAD, GoI and programme agreement between IFAD and GoN for the project was signed on January 25, 2018 and throughout 2018, FOCUS Nagaland team conducted consultation and orientation sessions at district level and with the representatives of the village councils. (Page News Service)