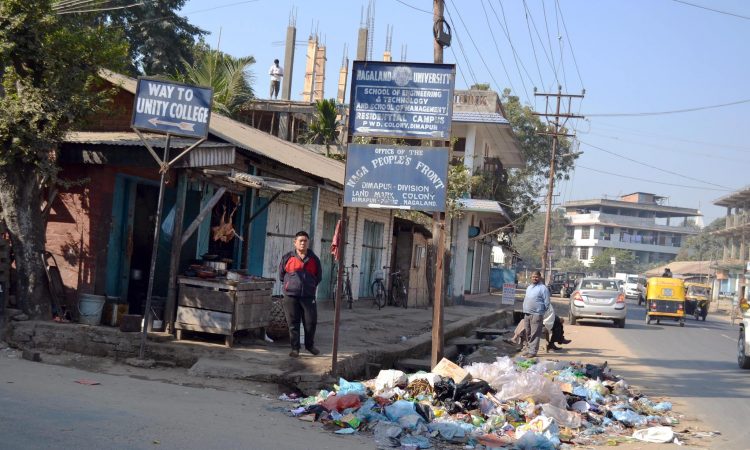 State’s cleanest town Mokokchung is only 57th in NE

Dimapur, June 24: In a major embarrassment to the people of Nagaland and the State Government, a survey has found Nagaland as one of the dirtiest states in the country. Apparently the much hyped Swatch Bharat Abhiyan has failed to take off in the State.
According to Swachh Survekshan 2018 – a nationwide cleanliness survey conducted by Union Housing and Urban Affairs Ministry, Nagaland is the third dirtiest State in the country and second dirtiest State among North East states. Behind Nagaland is Puducherry (Uion Territory) and Tripura, the dirtiest State in the country,
Jharkhand, which was placed last in the survey in 2015, emerged as the cleanest State in the country. Maharashtra and Chhattisgarh took the second and third slots respectively.
Among cities, Madhya Pradesh’s Indore and Bhopal emerged as the cleanest cities in the country occupying the top two slots in the survey.
Among NE states, Sikkim is the cleanest State. Sikkim also was the 6th cleanest State in the country. Manipur (11) came second among NE states followed by Mizoram (15), Assam (24), Meghalaya (26), Arunachal Pradesh (27), Nagaland (29) and Tripura (31).
Kakching (MC) in Manipur is the cleanest city in North Ease zone scoring 2458 points, followed by Biate (2217) in Mizoram. No city/town in Nagaland is in the top 50 cleanest city/town in NE zone.
The cleanest city/town in Nagaland, according to the survey, is Mokokchung (MC) with 1184 points but which occupies the 57th place among cleanest NE cities/towns. The second cleanest city in the State is Tuli (TC) with 1066 score and 79th in NE. Changtongya (TC) comes third (NE ranking 104), followed by Chumukedima (TC), which is ranked 117 among cleanest NE cities/towns. State capital Kohima and Dimapur doest not figure in the list of 201 cleanest cities/towns in the NE zone.
The Swachh Survekshan – 2018 ranking of the cities, separately done for those with a population of one lakh or more (national ranking) and those below one lakh (state and zonal rankings), was based on assessment of progress from January 2017 till December 2017 under Swachh Bharat Mission-Urban (SBM-U).
The objective of the survey is to encourage large scale citizen participation and create awareness amongst all sections of society about the importance of working together towards making towns and cities a better place to live in. Additionally, the survey intended to foster a spirit of healthy competition among towns and cities to improve their service delivery to citizens, towards creating cleaner cities.
The MoHUA conducted Swachh Survekshan – 2018 covering 4203 cities including 61 cantonment boards. (Page News Service)