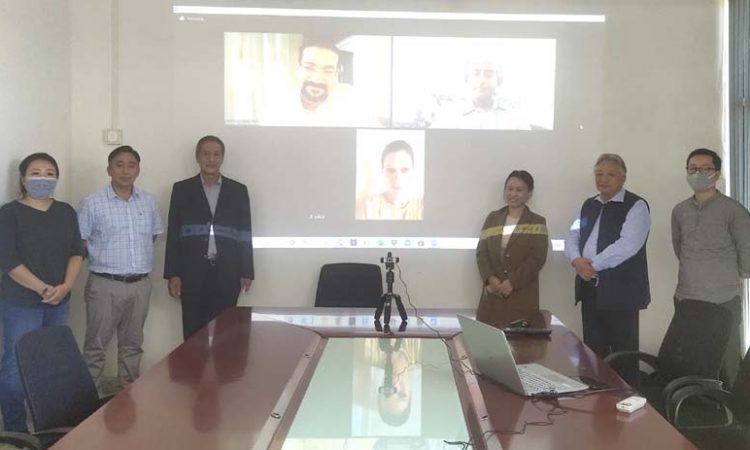 KOHIMA, SEPTEMBER 10: The Nagaland Government, Project Her&Now (GIZ), Dhriiti – The Courage Within, on Friday inked a tripartite MoU to promote strengthening and development of women entrepreneurship ecosystem in Nagaland.
The MoU was signed virtually in the office of the Investment & Development Authority of Nagaland (IDAN) here.

On behalf of Nagaland Government, Chief Executive Officer (CEO) of IDAN Alemtemshi Jamir signed the MoU while virtually present were Deutsche Gesellschaft für Internationale Zusammenarbeit (GIZ) GmbH, Head of Project Her & Now, GIZ Julia Karst, Co-founder of Dhriiti – The Courage Within Anirban Gupta and Head of Project GIZ, Ullas Marar.
Under the name of Her&Now, the project aims to contribute to a more enabling environment for women-led enterprises in India.
The Memorandum of Understanding (MoU) will make it possible for the three parties to collaborate and work jointly to create an enabling environment for women entrepreneurship in Nagaland to thrive, stated the agreement.
IDAN is an investment promotion and facilitation agency of the Nagaland Government established by a Cabinet decision in June 2018 to explore, promote and facilitate all possible investment opportunities in the State.
GIZ and Dhriiti-The Courage Within are already collaborating through Project Her & Now to provide support to women entrepreneurs of the North East Region through a structured incubation and acceleration programme, informed Head of Project Her & Now, GIZ Julia Karst.
“One critical need that we have seen emerging during our implementation is for different stakeholders of the entrepreneurship ecosystem to come together to address the unique needs of women entrepreneurs, and facilitate their access to a network that helps them grow. We are confident that our partnership with IDAN and Dhriiti will bring us one step closer to achieving this in Nagaland”, said Karst.
“We sincerely feel that this partnership with Her&Now, GIZ and IDAN will enable the women entrepreneurs of Nagaland to build a special identity for themselves and their products. We also see that this initiative will build an active ecosystem for promoting and supporting women entrepreneurship in Nagaland”, said Dhriiti co-founder Anirban Gupta.
GIZ GmbH is implementing the project ‘Economic Empowerment of Women Entrepreneurs and Start-ups by Women’ on behalf of the German Federal Ministry for Economic Cooperation and Development (BMZ), in partnership with the Ministry of Skill Development and Entrepreneurship (MSDE).

Meanwhile, interacting with media persons after the signing of MoU, Jamir said in Nagaland women are quite empowered but in some or the other form discrimination does exist about women being entrepreneurs and working. But this project would help Naga women to become full-fledged entrepreneurs, he said.
“The IDAN is happy to partner with GIZ and Dhriiti in a work that ventures into an area that is less travelled, being – ‘Women enterprise and entrepreneurship’. We look to carry this forward even after the project period comes to an end and where the Government of Nagaland involvement will be required”, said Jamir.
He said that presently there is no financial implication for IDAN and the State Government but later on when IDAN takes over the need may arise.
Entrepreneurship is the domain of the Industries Department therefore subsequently the project would be handed over to the Department, he said.
(Page News Service)