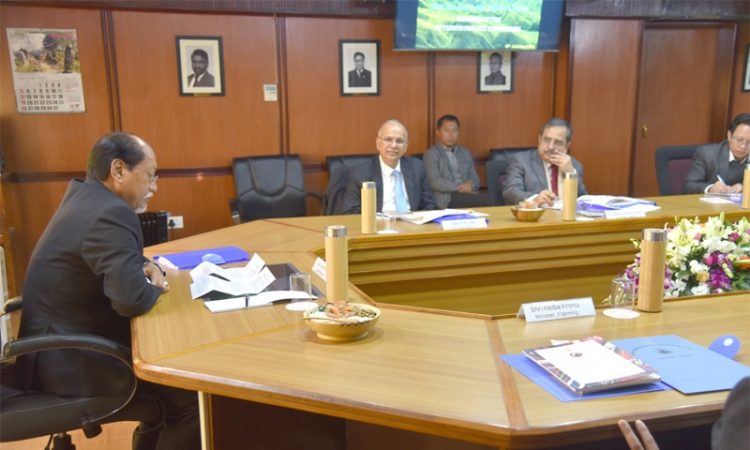 Dimapur, January 8: Two members of the Fifteenth Finance Commission (FFC), Dr Ashok Lahiri and Ajay Narayan Jha on Wednesday observed that Nagaland has high revenue expenditure compared to other North Eastern states, and the need for rationalisation of employees so as to bring down revenue expenditure and increase developmental expenditure.
The FFC members made the observation while interacting with the Chief Minister of Nagaland, State Planning Minister and officials of the State Government led by the Chief Secretary at Kohima today.
The FFC members also observed that the level of AT&C losses in the power sector is very high, and that the entire NE was lagging behind in infrastructure development. Other issues discussed included Direct Benefits Transfer, PFMS, banking coverage, low CD ratio, low resource base, high revenue expenditure and decline in capital expenditure.
Dr Ashok Lahiri emphasized the need to focus on the agriculture sector, to harvest the abundant rainfall in the region, and to produce more so as to reduce dependence on commodities being purchased from outside the State. He also pointed out to the need to become more self-sufficient in fish and meat products.
Discussions also took place on the functioning of local bodies in the State, including communitization of public institutions.
Earlier welcoming the FFC members, Nagaland Chief Minister Neiphiu Rio thanked them for visiting the State and said the State has high expectations from the Commission. He expressed problems that the State has to face due to its remote location, and the financial handicap following the change in the system of financing after the year 1989 when the funding arrangement put in place under the 16 Point Agreement was discontinued.
Rio also raised some issues of concern to the State such as the need for help in setting up Chiethu Airport for which land had already been acquired, and the importance of the foothill road for economic development of the State. He also briefed the FFC members of how the manufacturing sector has been heavily affected by the ban imposed by the Supreme Court on felling of timber. He further highlighted problems caused due to non-completion of road projects in the State despite the passage of many years, causing untold problems to the people.
State Planning Minister also raised concerns over the slow rate of development and the need for funds for maintenance of assets. He highlighted the problem faced by the State due to discontinuation of SPA funding, resulting in liabilities of more than Rs 500 crore.
Nagaland Chief Secretary explained the reasons for the high number of Government employees and of the measures being taken to reform the power sector in recent times. He also explained the measures being taken to rationalize the number of Government employees by the Manpower Rationalization Committee and efforts towards convergence of various Government sectors to make implementation of schemes more effective.
The CS requested the Commission to give due consideration to cover the revenue gap and also provide funds for State specific needs to ensure a steady pace of development. The members were also informed of the difficulties faced due to poor banking coverage as well as poor network coverage hampering progress of Direct Benefits Transfer as well as access of the rural people to institutional credit. The members observed that the CD ratio was very low.
Later both sides expressed appreciation to the issues raised, and expressed the need for the State Government to explore more avenues to generate resources to fund its developmental activities, and the need for rationalisation of employees so as to bring down revenue expenditure and increase developmental expenditure.
The 2 FFC members are in the State on a 2-day visit. They are the only full time members of the Commission who had not yet visited the State. The earlier visit of the Commission to the State during November 2018 included the Chairman, NK Singh and member Dr Anoop Singh.
AN Jha had earlier visited Nagaland as the then Secretary to the Fourteenth Finance Commission. He then went on to hold key posts of Union Expenditure Secretary and Union Finance Secretary. After his retirement, he was appointed as Member of the Fifteenth Finance Commission in March 2019 in place of Shaktikanta Das, who was appointed the Governor of RBI.
Dr Ashok Kumar Lahiri, Member is a distinguished economist who had earlier served as the Chief Economic Adviser to the Government of India. He also held other important assignments in the Asian Development Bank, World Bank and IMF.
Earlier on arrival at Kohima from Imphal by helicopter on January 8 morning in continuation of the earlier visit of the Fifteenth Finance Commission, the two members made a brief visit to the Kohima War Cemetery and the State Museum. (Page News Service)