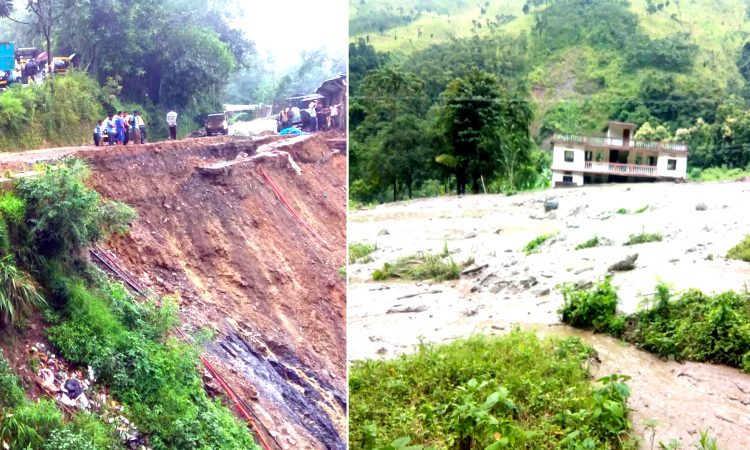 Landslide near Paramedical, Kohima. Right: --Landslide between Ukha and Tobu

Dimapur, August 1: Following large scale destruction of roads and buildings due to landslides and floods triggered due to incessant rainfall in the state, Nagaland Government today took stock of the unprecedented disaster and even sought Centre’s assistance to tackle the catastrophe.
Chief Minister, Neiphiu Rio today directed Roads & Bridges Department to immediately take up construction of Bailey bridge over Sanuorü river and near the Naga Hospital-Naga Bazaar-Tin pati route.
While Tsiesama – Peducha road has been restored and fuel tankers and other essential commodities trucks are being allowed to ply on the route, fresh landslide have occurred at Science College road.
According to a DIPR report, massive landslide that occurred at Sanis-Moilan road in Wokha district has been cleared. The Baghty Division roads have also been cleared at present. According to reports received as on 1st August 2018, around 25 families in Ruchan village, 8 families in Liphi village and 9 families in Renthan village have been affected. All these villages fall under Bhandari area of Wokha District.
In Dimapur, East police colony has been badly flooded. However casualties have not been reported. Temporary camp arrangement for families where water has still not receded in Middle Colony, Purana Bazaar for the past few days have been initiated.
In Kiphire district, 17 landslides have occurred in between Akash bridge and Meluri, with two JCBs clearing the road. Light vehicles are able to pass through.
Three (3) km beyond Meluri, 25 meters of road have been washed away. The Administration is trying to make a diversion from forest colony which would join the highway at the 5 km mark to allow light vehicles to go through. In the 6 km and 8 km mark two major landslides have occurs, which will take two- three days to clear. Kiphiri is completely cut off.
The District Administration has also informed that the District is facing shortage of diesel.
The road from Kiphire to Tuensang has been blocked near Yahi bridge which may take a week to clear. It was also informed that the Kiphire to Zhuneboto road has no bridge over Tutha river as it was washed away few years back.
It has also been reported that a heavy landslide in between Seyochung town and Sitimi town has also occurred. Kiphire to Kohima road has been completely cut off at various locations due to landslide.
It was confirmed that a week will be needed to restore the road. Meluri and Kiphire Administration are in full swing to normalize the situation.
Due to heavy rains the roads between Tobu and Mon and Tobu and Tuensang have been totally cut off. The people of Tobu sub-division are suffering from shortage of food items.
Further, terrace cultivation fields were washed away and some houses were damaged under 55th A/C Tobu.
Chairman, Kiphire Chamber of Commerce S Litingse Sangtam has extended all possible help.
Meanwhile, officials from the Ministry of Home Affairs called the Chief Secretary to enquire on how the Centre can help the situation. It was stated that MHA choppers will be made available immediately and arrangements can be made for air lifting and dropping off of essential commodities in affected districts.
35 personnel from 12Bn NDRF from Doimukh (Arunachal Pradesh) have moved out on July 31 for Dimapur. They will hold at CTI (HG&CD) Dimapur until further directions are given.
All NAP Battalion have also been put on standby.
All PWD NDMA officials and personals and other related departments are at the effected spots and doing the required necessities including medical assistance and restoration works.
Emergency Control Room Set up
Home Commissioner to the Government of Nagaland, R.Ramakrishnan IAS has informed that to monitor the damages of roads, both State & National Highways all over Nagaland, an emergency Control Room has been set up in the O/o Engineer – In – Chief, NPWD which would be available 24×7. The Control Room will be manned by the Officers of the Department round the clock.
Any individual/ Organization desiring to report on the road damages / status of the roads may contact the Control Room -9436016005 (M), Deputy Chief Engineer; 9436832299, Asst. Engineer-0370-2222827 (L) and email at encnpvvd@gmail.com
He also requested that the Food and Civil Supplies Department should be ready with sufficient stock or essential commodities for supply to far-flung districts.
(Page News Service)