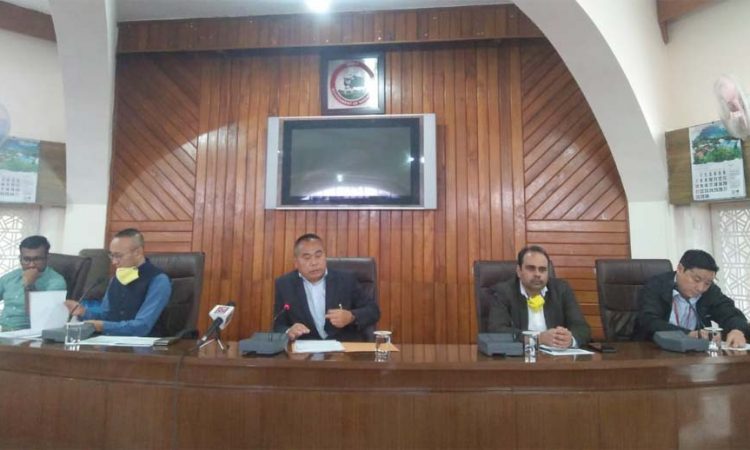 Kohima, June 12: The Government of Nagaland has so far spent Rs 8.68 crore on maintenance of quarantine centres for returnees and Rs 1.65 crore for ferrying returnees to the State. The Government has also decided to strengthen the health infrastructure with more new appointments in the offing.
Briefing the media at Secretariat conference hall today, Government’s spokesman & Advisor, Mmhonlumo Kikon said quarantine centres in11 districts are being managed by the District Task Force and foods are being provided through catering system.
He said the Government has also spent Rs 1.65 crore for hiring 32 buses and nine trains to bring the people to the State from 13 states. More people will reach the State in the coming days.
The Government will also bring out total expenditure that is going to be incurred for returnees within a few days.
Kikon said Chief Minister, Neiphiu Rio today held a video conference with the Deputy Commissioner and SPs of the districts and assessed the situation on the activities in the districts to implement the new SOPs and to address the grievances. The Chief Minister is heading the High Power Committee.
Later Rio also had discussion with Union Minister for Development of Northeast (DONER) Jitendra Singh through webinar and proposed for E-office, which the Union Minister has acknowledged. He reminded the Union Minister for speedy development of airport in the State capital, which is a long pending issue kept in cold storage.
Rio also apprised the Minister about progress of trans-border highway (foothill road) from Dimapur to Tizit.
‘Strengthening health infra’
Meanwhile to strengthen the manpower of the Health and Family Welfare Department the State Cabinet has approved creation of 53 specialist doctors for all district hospitals. Also creation of one post of Director, Medical Education and Radiation Safety at the level of Special Selection Grade-Pay level-18, creation of five posts of Zonal Leprosy Officer for Longleng, Peren, Phek and Zunheboto, at the level of Senior Grade Pay level-15, encadrement of two posts of District Vector Borne Officer for Tuensang and Zunheboto, into the cadre of the Nagaland Health Service, as and when the present incumbents vacates the same to be manned by medical doctors and creation of 143 posts of staff nurse to be deployed in all the district hospitals.
The Cabinet also approved age condonation of 28 staff nurses under Health & Family Welfare Department and fresh appointment be made against the sanctioned post, regularization of 19 serving contract medical officers under the Health & Family Welfare Department and regularization of 27 existing Medical Officers who have been engaged by the department for one year.
Minister for Planning and Coordination, Neiba Kronu said the State Cabinet has directed that this approval is a one-time relaxation of laid down rules and procedures for recruitment, regularization and condonation of age. Further, this one time measure is in view of prevailing situation due to COVID-19 pandemic and will not be treated as a precedent.
Kronu added that a special train from Thiruvananthapuram, Kerela, which departed with 966 persons on June 9, will reach Dimapur on Saturday at 5.30 am. The train has been hired to bring stranded people Kerela, Tamil Nadu, Telengana and Andhra Pradesh. “Another special train from Delhi with about 1000 persons will be leaving Delhi on June 14 at 6 pm and it will reach Dimapur on June 16,” he said.
He also informed that so far 41 people have recovered from COVID-19. (Page News Service)