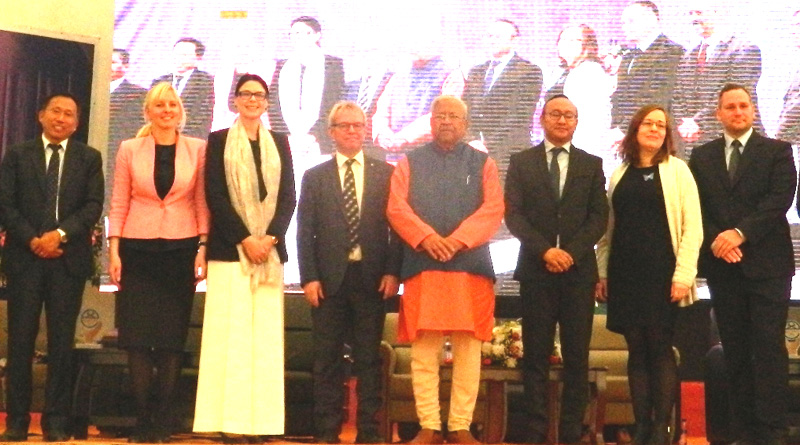 Governor PB Acharya, Advisor Mmhonlumo Kikon and representatives from Estonia and others during the e-Naga Summit at Kohima on November 30, 2018.

Kohima, November 30: Aimed to enlighten the people of Nagaland on the e- Governance models prevailing elsewhere in the world and to motivate adoption of the digital technology wherever it is feasible, the State government today inked an MoU with the e-Governance Academy of Estonia.
The Memorandum of Understanding (MoU) was signed between Nagaland Government represented by Commissioner and Secretary of Information Technology and Communication Department, K D Vizo and Director for eGovernance Academy, Estonia, Arvo Ott in the presence of Nagaland Governor P B Acharya and Advisor for IT&C Mmhonlumo Kikon during the e-Naga Summit held at NBCC Convention Centre.
The agreement is for a period of 5 years, with the main object to work together to create the best chance of developing and expanding scientific collaboration on establishing eGovernance Academy in Nagaland, stated the MoU.
Meanwhile, in his inaugural address of the summit, the Governor said the world today is depending on Information Technology for easier access to information and services.
The e-Naga Summit can be the right platform in bringing together experts in the IT field from different Countries, Industries, Central and State governments officials and through them, the State can build a knowledge based society which would ultimately help in providing good governanc, he said.
Maintaining that young people can not only be innovators and creators, but can be the leaders of the future if they acquire right kind of skills and equip themselves to take up the opportunities for job and wealth creation, the Governor was of the view that with the right policies in place and through extensive investments in human capital, we can empower young people to drive socio-economic development and increase our capability for wealth creation to the Society and State.
“We must invest in skill development of youths in order to realize their full potential and also to make an effort to bring them back to make their State economically strong,” he said.
“India’s IT industry is playing a major role not only in India but all over the world’s economic growth, he said while citing the success of software business in Bangalore, Hyderabad, Chennai, which he said are indication of how the economy can grow so fast by employing the latest IT technology.
In this he said, the time has come for the State of Nagaland to harness the numerous benefits of Information Technology and to catch up with the advanced other States of our country to transform the State into a knowledge-based society through Information Technology.
Government of India is extending all required help to the IT industry even to the extent of bringing out a separate Digital India policy, he said, while asserting that Nagaland will also be providing all required support to meet the challenges of changing times.
Advisor for IT&C, MLA Mmhonlumo Kikon said the state Department of IT&C is now playing a key role to transform the State of Nagaland into a modern State by way of improving transparency, efficiency and ensuring cost effective public service delivery to the citizens.
The State is now witnessing a paradigm shift in Governance and all other spheres of life and Information Technology and electronic media is enabling a knowledgeled economy, he said.
Maintaining that the world is now looking up to India to drive the global economic growth and India is looking towards east to open eastern corridors towards South East Asia to promote economic growth, he said the Government of Nagaland is fully aware that it is the right time to take the State to the next higher level and make the State “the next IT hub of South East Asia” through extensive use of e-Governance and IT based technologies.
In this, Kikon said out of the several vision of the State some of the important areas are to make Nagaland an Information Technology hub through setting up of world class Business Process Outsourcing (BPO), Knowledge Process Outsourcing (KPO) for North Eastern Region and South East Asia.
It also aims to provide High Internet Bandwidth to every Village Panchayat, he said while also aspiring to transform Nagaland into a digital society through transparency and accountability.
Another object of vision is to enable all Government Departments to have e-Offtce to deliver services promptly to citizens through online system, the Advisor added.
Stating that the main aim of the Government of Nagaland is to make the State a major software exporter in South East Asian Region and also to make Nagaland one of the richest State in the Country by actively engaging the unemployed youth in meaningful IT and e-Govemance related activities, Kikon asserted “we are committed to build a strong, sustainable and stable future for our youth through IT interventions and wherever required the Government of Nagaland shall take strong decisions as long as it is serving the interest of our State”.
The day-long e-Naga Summit held on the theme “Building IT infrastructure to make the State of Nagaland the next IT hub of South-East Asia” covered topics such as “e-Governance coordination and policy making” by Arvo Ott, “e-government and smart city” by Special Advisor of United Nations University, Portugal, Sara Fernandes and “Government initiatives for promotion of technology in North East Region by Joint Secretary of DoNER, S N Pradhan. (Page News Service)