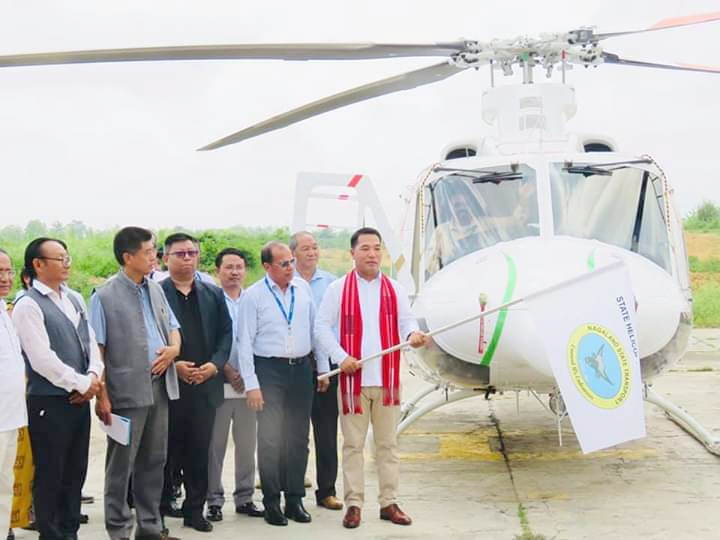 Dimapur, June 12: Nagaland Minister for Transport, Civil Aviation, Railways and Land Resources, P. Paiwang Konyak officially flagged off the 2nd State Helicopter service on Wednesday from Dimapur Airport.
The high end configured air conditioned helicopter with medical facilities has a sitting capacity for 13 passengers.
With the induction of the additional helicopter, the helicopter service in Nagaland will now be operating on 19 routes from the present 10 routes. 75% subsidy will be entitled only to common passengers and medical evacuation cases. VIPs and bureaucrats/ Government servants will not be entitled for subsidies as per the directive from the Ministry of Home Affairs.
During the 2nd helicopter induction programme, Secretary, Transport, Kenilo Apon said the State Government faced a lot of problems during the massive landslides last year, and had to engage 2 Indian Air Force choppers to meet the challenges of evacuation and relief, as the State chopper service was not sufficient.
Taking note of the matter, Minister, Paiwang had taken up the issue with the Home Ministry, GoI, and MHA agreed to enhance the flying hours from 480 hours to 1200 hours, he informed. Apon expressed gratitude to CM Nagaland, Neiphiu Rio and Minister Paiwang for the initiatives taken for the welfare of the people of Nagaland.
The Secretary also urged the Managing Director, Civil Aviation to ensure that all pilots deputed in the State follows the standard operating guidelines so that the good image, trust and confidence of the people would continue to grow.
Senior Associate Pastor, Dimapur Lotha Baptist Church, Rev. Chumben Kyong offered the dedicatory prayer. After the flagging off programme, Minister Paiwang along with Secretary, Transport, Rev. Chumben, DPRO Dimapur and other officials went for a short chopper ride with captain Mukesh and Captain Nair. (Page News Service)

NBSE to declare HSLC, HSSLC Results on May 30