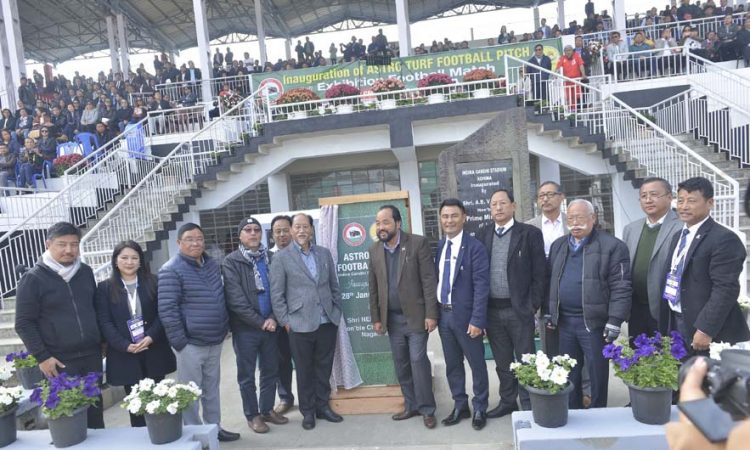 Kohima, Jan 28: Nagaland Chief Minister, Neiphiu Rio on Monday inaugurated the first Astro Turf football pitch at Indira Gandhi Stadium here.
The installation of Astro Turf at IGS Kohima was conceived in the year 2013-14 with a total cost of Rs 4.98 crore, said Executive Engineer PWD (Housing) Nimo Kath. He said that the project stopped due to fund constraint but after Rio took over the government in March last year an amount of Rs 213 lakh was provided under Development Expenditure (additional) for completion of the project.
He said that the project was conceived with a view to provide a standard football playing field which can host national and international matches and also to nurture and train the youths of the State.
The Astro Turf has been installed following the specifications and norms of FIFA.
In his inaugural address, Rio while congratulating the Department of Youth Resources and Sports for completing the project in record time and in an exemplary manner expressed hope that with this, “we will begin the process of development of football in the state”.
The CM also announced that with a view to develop sports in the State, the government would set up Astro Turf football ground and also provide better sports infrastructure in all the districts headquarters because without proper infrastructure we cannot expect our youths to excel in higher level of competitions.
Good infrastructure does not only mean physical infrastructure like grounds, stadiums and academies but it includes quality human resources like good coaches, trainers, physiotherapists, nutritionists, he said.
In this, Rio asserted that the Government is working on strategic sports infrastructure development plan where every district will have quality sports facilities. “We are engaging proven sports consultants for an infrastructure development plan,” he said.
To begin with, Rio said the State government is partnering with Bhaichung Bhutia Football Schools for a game development plan beginning with young footballers of Nagaland. “Interested and potential Under 16 footballers from all over Nagaland will get the opportunity to be part of the program which will include exposure events and junior leagues,” he said.
He said that the People’s Democratic Alliance, PDA government has taken steps to bring back development of sports and games in the State.
“We have instituted several initiatives under Dr T Ao, our first Olympian and India’s first football captain to the Olympics. We want to pay respect and homage and use his name to inspire the younger generations,” the CM said.
Appealing all sportspersons of Nagaland to rededicate themselves to reach the highest standards, Rio assured to do everything possible to support and promote. “We are hopeful that a small, yet, significant step has been taken today in producing champions for tomorrow,” he said.
Advisor for Youth Resources & Sports, Zale Neikha in his address took the moment to pay tribute to the legendary footballer Dr. T. Ao, who made Nagas known to the outside world through Sports.
“Today, history has been created. Our long awaited and cherished dream of an Astro Turf pitch is here to stay,” he said while informing that the Department is on a war-footing to erect and install flood-lights in the stadium, and furnishing it with necessary facilities to make the stadium suitable to host the National Games in the near future.
The PDA government is for ‘Change’ and Change is here today, he said, adding that under the dynamic leadership of Neiphiu Rio, the government intends to bring about all-round development in the state, while trying to uplift the youths in the society.
This Astro turf is one of the many achievements of the PDA government in its 11 months rule, since coming to power in 2018, he said.
Nagaland Football Association president P Atuo Mezhür in his brief address lauded the efforts of the government in promoting sports. He also informed that NFA would revive the Nagaland Premier League to develop the game of football.
Meanwhile, as part of the inaugural session an exhibition match was played between Chief Minister’s XI and Chief Secretary’s XI, wherein the latter won by 3 goals to nil. Bhaichung Bhutia also was part of CM’s XI team in the second half.
Nagaland State Chaplain Rev Kuzierang Thou offered the dedicatory prayer. (Page News Service)