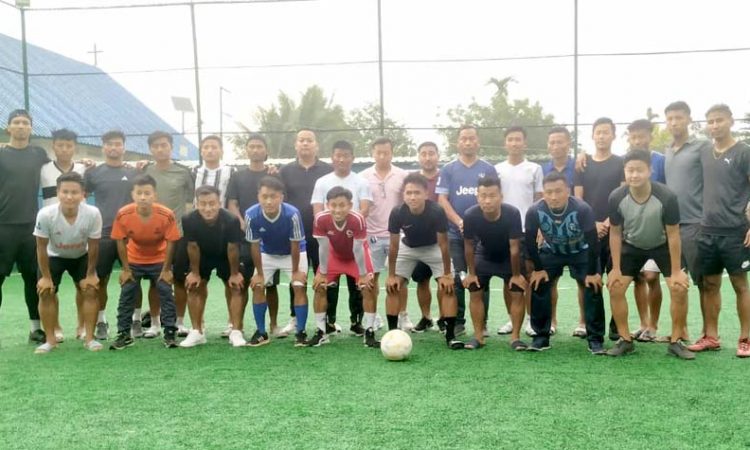 Dimapur, April 10: One of the new generation footballers from Nagaland to play in the I-League, James Kithan, who is a goalkeeper by trade, took his gloves off and went bare-knuckle on Saturday when sharing that he feels sympathy for the upcoming players in Nagaland because the State lacks basic necessities to groom and develop young talents.

The 26-year-old goalie also said that he doesn’t have much hope from the forthcoming Dr. T Ao Inter District Championship, which is set to commence on April 13 at Kohima, “as things have remained the same over the years”.
Those damning indictment of the state of affairs in Nagaland football were delivered during an interaction with media persons during an event on Saturday at Kakit Futsal, Ura Villa Colony in Dimapur, to unveil the district’s team for the Dr. T Ao Inter District Championship.
Kithan, who is professionally associated with the iconic Goa club, Churchill Brothers FC, said that Nagaland needs more good grounds (AstroTurf). He pointed out that here is only one in Kohima and none in Dimapur.
The difference in the standard between football in Nagaland and other States is huge because of the poor infrastructure here, he shared. This in turn makes the situation very difficult for footballers from Nagaland, he added.
Despite the bleak picture, he encouraged the players in the State to never give up and train themselves as professionals. As part of team Dimapur, he expressed hope that team might will the trophy this year.
These sentiments found echo in the voice of the president of Dimapur District District Football Association (DDFA), Mughato Aye who also hoped that the team will bring the championship home this year, and lamented the absence of an AstroTurf ground in Dimapur.
Aye said that the team has been fortunate to have big names like James Kithan and Kivi Zhimomi who are professionally associated with the Churchill Brothers. Having these players naturally turn Dimapur into one of the title contenders this time, he said.
Aye informed that while the team has been practicing since March 22, it was only on April 9 that they started practicing on AstroTurf ground.
The DDFA president expressed disappointment that while Dimapur has produced some excellent players who are making the State proud, the city has been sidelined and doesn’t have an AstroTurf ground — and the one that it was supposed to have had been shifted to Chumukedima “which is not a feasible place for everyone”.
Peaceful protest
Aye informed that after the tournament, the DDFA will stage a peaceful rally and submit a memorandum to the Chief Minister for the same. He said that the shifting of AstroTurf ground was unfortunate.
According to him, there is enough space for grounds ‘and space should not be an excuse for the shifting’.

Vice president of DDFA and Team Manger of Dimapur District, Lanutoshi Yaden called it unfair that while Nagaland has 12 districts, only some get the opportunity to play on AstroTurf facility.
Yaden also informed that everyone in the team has undergone coronavirus test and the results came negative.
(Page News Service)