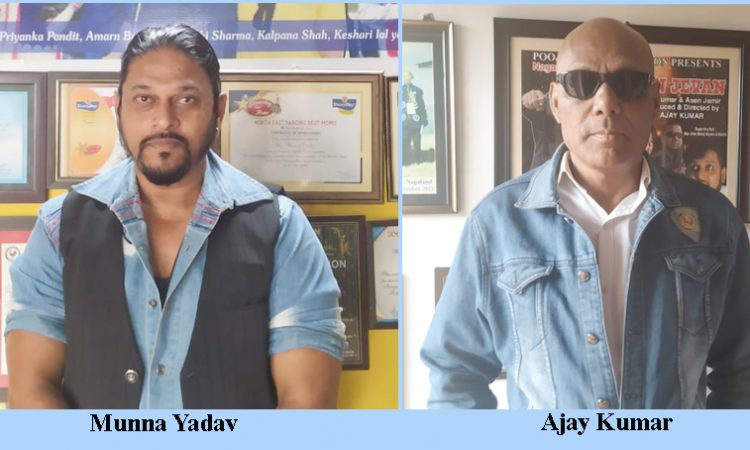 Prasanjit Dutta
DIMAPUR, FEBRUARY 21: Most of the filmmakers in Nagaland tend to compare the condition of film ‘industry’ in the State with those of Manipur and Assam in their attempt to give a clearer picture of their state of despair despite more than three decades of fighting against the odds to keep the industry’s heart beating.
Unlike Assam and Manipur, where the industry has distinct identities i.e., Jollywood and Maniwood, in Nagaland, there is only confusion.

Occasionally, a few people in the industry use the term ‘Nagawood’ but not everyone is on the same page or are even familiar with the term.
Thus, ‘Nagamese films’ is the generally accepted name.
Uncertainty surrounds the origin too, as no one can decidedly say when the first Nagamese movie was released.
However, the few filmmakers based in Dimapur agree that the first Nagamese movie released in Nagaland was Aji Duniya, which was made by a filmmaker named Khamrang who hailed from Manipur.
It is important to understand that the years in which the early Nagamese movies were made and released is extremely debatable as some claim that Aji Duniya was released in the late 1980s while others place it in the mid 1990s.
Khamrang reportedly made eight to nine movies like Iswar Logot Ahibi, Taka aru Izzat, and died just before the release of another movie he was working on in the early 2000s
Interestingly, Aji Duniya was not the first Nagamese movie made, though it was the first to be released.
In the early 1980s (disputed), there was a movie made in Nagamese, titled Bosti Manu, using a 35mm film camera by a Dimapur-based filmmaker named Ghoshito Yeptho.
The film revolved around the theme of forest conservation, but it was never released though a few premier shows were done.
One thing that appears clear in the midst of this uncertainty is that these two filmmakers introduced the local film industry and inspired a generation of filmmakers in Nagaland that was to come.
And decades since, the industry continues to limp in Nagaland with hardly a crutch in sight.
Limited resources has forced the filmmakers to compromise on quality heavily and more often than not, the one who is producing a film also directs it, writes the script, acts in it, takes care of the marketing and everything else.
The movies are often made using camcorders.
According to Munna Yadav, who was ‘thoroughly inspired’ by Aji Duniya to get into Nagamese film, Khamrang had quality and good stories that established him as a ‘successful filmmaker’ and there are people in corners of Nagaland who still talk about those movies.
Munna, who recently shifted from Nagamese movies to Bhojpuri and Hindi movies after two decades in the industry, told Nagaland Page sitting in his dance school at Khermahal, under the banner of Murti Films Production, that there is hardly any revenue in the State from films.
Filmmakers are not even able to get the money back they had invested in making the movie, he said adding that this, among other factors, had led him to look for markets beyond Nagaland.
Munna who acts, directs and produces, now makes movies in Bhojpuri and Hindi taking actors from different film industries, including Nagaland.
On completion, he sells the rights of the movies to the big production houses.
He claims this model will not only give more exposure and experience to the artistes from the State but also attract film industries of other States to Nagaland.
It is estimated that making an average Nagamese movie can cost anywhere between Rs 1 lakh to Rs 3 lakh.
But in Nagaland, because of a non-existent market, the cost of making a movie is not recovered.
Earlier, before the era of cheap smartphones and easy internet access, and in the absence of movie theatres in the State – a time when VCR and DVD players were still in fashion – the local filmmakers were making profits by selling cassettes.
But it is no longer the case, and the movie theatres operating in Dimapur neither run the Nagamese movies nor are they affordable to the filmmakers like in the past when an entire theatre could be booked by local filmmakers and movies could be ran by printing and selling special tickets.
In the midst of this, it is evident that the film industry in Nagaland is going through a phase of chaos as the filmmakers usually work independently.
There is no government regulating authority, no systematic records, and the State Government is allegedly not concerned about the movies being released or the taxes that ought to be collected.
Munna, who is presently working on his upcoming project Ziddi IPS, said that over the years, due to the bleak prospects of the industry, many filmmakers have called it quits and the industry desperately needs the support of the government, something in the line of TaFMA.
Ajay Kumar, another popular face in Nagamese film industry today, made his first movie Revenge Lobo in 1995 and has released numerous movies since then – the latest being Innocent Woman II released on January 31 last.
Kumar takes delight in identifying himself as ‘action filmmaker’ and his movies usually dwell on the subject of violence.
Interacting with Nagaland Page at his residence in Half Nagarjan, Dimapur, Kumar recounted similar plights of the filmmakers and revealed of his plan to leave Nagaland film industry soon and move to Assam.
“Puja Films is shutting down in Nagaland,” he said.
Kumar said that there is neither market nor support for Nagamese films in Nagaland and there is rarely any big personality who comes to support the new releases.
He claimed that except Nagaland all other states in the region have good foundations.
Kumar was one of the initial actors who had tried to be part of Khamrang’s films, but he was unsuccessful.

He recalled that Khamrang was working on a movie titled Afsos when he died.
According to him, Nagaland film industry is trapped in a vicious cycle where there is no market, leading to insignificant or no revenue.
And in the absence of revenue, the filmmakers cannot invest to make better films and since the quality of majority of films remain low, there is little to no market to sell them, he reasoned.
Kumar admitted that he used to hire cinema halls in the early days and sell his own tickets, but now, it is not possible and even the rates of the cable networks are not affordable.
Despite the disagreements (or even rivalry) among the local filmmakers, the common suggestion to revolutionize the film industry in Nagaland is government intervention, and perhaps setting up government-run cinema halls in each districts which will not only change the face of the film industry here but also generate revenue for the government as well as create employment opportunities.
(This is the first report of a two-part series)