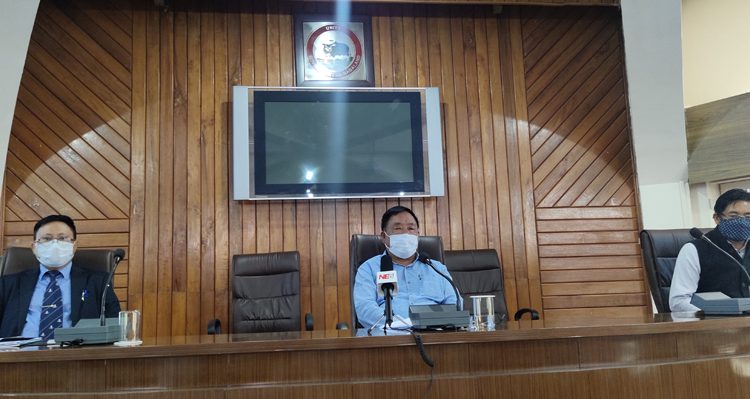 KOHIMA, JUNE 16: With the delay in the arrival of monsoon and erratic rain, Nagaland is witnessing a drought-like situation, said Minister for Agriculture, G Kaito Aye.
Assumed to be the effect of climate change, this year the State is facing a slightly peculiar weather situation than other years, and we fear drought-like conditions if there is no rain within the next few weeks, said Kaito while addressing a press conference in the Secretariat conference hall here Wednesday.

Data provided by the Nagaland State Disaster Management Authority (NSDMA) maintains that the State is facing rainfall deficiency of 20 to 59%, except Mon district where the rainfall is excess by 48%.
There has been no rain from February to May this year while the State has witnessed infestation of Fall Army Worm (FAW) on maize while commercial plants including Cardamom have dried up because of insufficient rain, he said.
If the same trend continues till July then the farmers may fail to undertake cultivation activities and this is causing fear among the local farmers, he said.
On Tuesday, Nagaland Chief Minister Neiphiu Rio convened a meeting of Agriculture and Horticulture Departments to take stock of the drought-like situation in the State in the presence of Cabinet Ministers wherein Agriculture Production Commissioner (APC) Y Kikheto Sema apprised the present scenario, he said.
Nonetheless, Aye said that since there is no substitute for agriculture, the State Government is taking up the matter with the Ministry of Agriculture for necessary measures to mitigate the problems faced by the farmers
Advisor for Horticulture Mhathung Yanthan said unlike previous years there is scanty rain in several parts of the State while some have normal rainfall while a few places have excessive rain.
This is impacting crop production and especially affecting jhum sector as the already sown seeds are drying up, he said.
The anguish of the farmers is compounded by the COVID-19 pandemic, Yanthan said.
Concerned at the plight of farmers, the State Government is doing its best to mitigate the situation by taking all steps to ensure that farmers are not affected, he asserted.
In this, the Agri & Allied Department is also planning to distribute seeds such as Potato, Oil seeds, Vegetables for early Rabi season from the month of September and October to compensate farmers for the anticipated loss, he said.
Yanthan also stressed on the need for the cultivation of climate-resilient crops and adopting scientific agriculture system.
APC Y Kikheto Sema, while elucidating the situation to the legislators, said 70% of the State farmers are involved in jhum cultivation but with hardly any rains from December 2020 till April 2021, agriculture and horticulture crops under jhum have been adversely affected leading to poor germination and wilting of standing crops.
The area affected by deficient rains amounts to 68,662 ha of jhum fields in 915 villages affecting in almost all districts, he said.
Terraced Rice Cultivation (upland) and Wet Terraced Rice Cultivation have also been affected due to deficient monsoon rains in all districts causing delayed land preparation and sowing, he said.
Rice production of the State, which was 5.51 lakh MT for the year 2020-21, is now anticipated to reduce to 1.66 Lakh MT during the current year, a reduction of 70 %, if the present dry spell continues.

Rainfall deficiency has not only affected the production of normal seasonal crops but also commercial crops such as large Cardamom, fruits and vegetables, and livestock such as fisheries, piggeries, etc, he said.
Compounding the woes, the situation in the agricultural scenario was further aggravated through infestation by FAW during the last week of March affecting 3048.45 hectares of maize crop covering 334 villages, he said.
Despite the Department’s timely intervention, the FAW infestation could not be completely neutralized, he said.
Foreseeing the drought-like situation, the Agri & Allied Departments distributed seeds and planting materials for re-sowing in the affected jhum fields. However even after this, it was not able to achieve the desired result due to a shortfall of rain, he said.
With more than 70% of the State population dependent on agriculture for their livelihood, the damage is going to be huge with anticipated crop production loss up to 70%, he said.
The State Government has constituted a Core Committee of Agri and Allied Departments, headed by the APC, to timely monitor and review the ground situation as per the reports received from the field.
The State Government has also directed all Agri & Allied Department officers to remain in station and closely monitor the ground situation. (Page News Service)